Some time ago I wrote about the importance of keeping track of modern features even though assembling an atlas of the Bronze Age.

All during the creation of this database I have dutifully kept track of all the modern features which I judged relevant for locating Bronze Age sites; all the various churches, towns, signs, hills etc. which the literature includes in its directions.

In Simpson [1981] we read this about the site of Ritsona.  ‘The site is a low knoll about 400 m. southwest of Rhitsona and 300 m. west of the road from Thebes to Chalkis.’[1]  The first challenge is to find Rhitsona.  I know that this isn’t hard but I located the town anyway and added it to the ‘Features’ table in the database.

Now if you look for the site of Ritsona/Mykalessos (C810) you’ll get a Place Key Report.  The map on that Report will now show modern features as well as the site you’re looking for.  These modern features will show up as a red paddle with an ‘F’ on it; the actual BA site has been changed to render as a blue paddle.  The map for Ritsona looks like this: 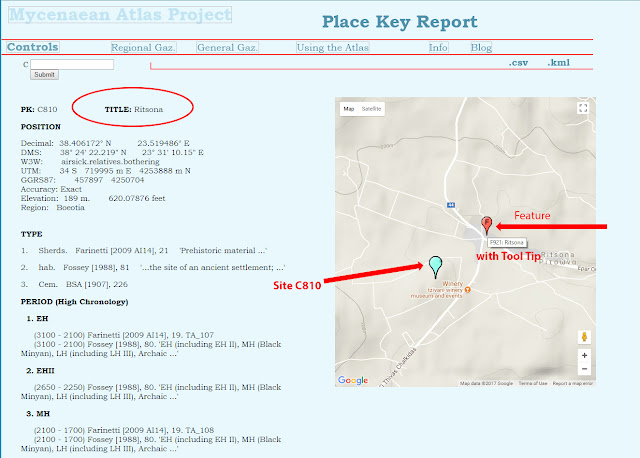 These new paddles also support tool tips.  That means that if you mouse over the paddle the name of the feature will pop up.  Clicking on these paddles does nothing.  They don't support info boxes although I might add that in the future for the modern feature paddles.

For each site I show features for approximately two kilometers in each direction.  If you zoom out you'll see that the features are limited to places around the sought-for site.  That way they load fast and you don't have to wait for all 3300+ to load.

Each feature has its own unique number, a feature number, which appears in the tool tips.  You can always refer to each feature uniquely.

Until now there hasn't been a way to show these features on the Place Report map.  Now you can see them.