The Magoula of Aghia Paraskevi

Finding a magoula can be tricky.  There is a good site for the magoulas of Thessaly and I strongly recommend it.[1]

Outside Thessaly, however, and unless the magoula has set of nice clear archaeological trenches on top of it, you have a difficult task.  No matter how imposing it may be in person, so to speak,  on Google Earth it fades into the surroundings.  Its two or three metre rise renders it nearly invisible.

"The "low mound" site of Ayia Marina lies on the north side of the Kephissos river, about 1.5 km. northeast of Ayia Paraskevi (formerly the Kalyvia of Agia Marina).  The site is not large (about 120 m. east to west by 100 m.), but trial excavations here established a long history of occupation, perhaps continuous from the Neolithic.  ... Some Mycenaean pottery was found.  It remains unpublished ... (etc.)"[2]

So.  Not really very important but let's find it anyway.  I include here a series of maps that allow us to zoom in on that area.  From furthest out they are: 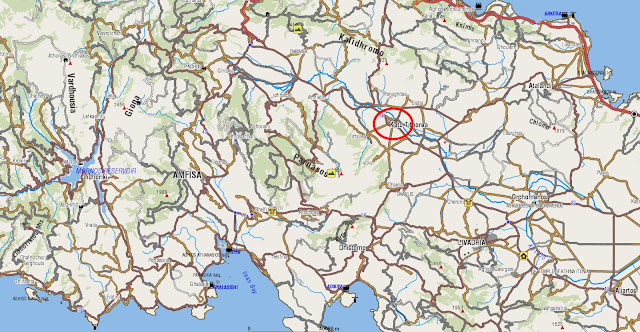 In this map we're looking at a large section of eastern Boeotia.  I've circled the nearest biggish town to our magoula.  You can just about see that it reads 'Kato Tithoreia'.

In this second map we've zoomed in on Kato Tithoreia.  The mountain mass to the lower left is the north edge of the Parnassos massif.  I circled the town of Aghia Paraskevi as the closest small town to the magoula.

In this third map we've zoomed in even more.  The town of Aghia Paraskevi is at the lower center and the red circle surrounds the general area of the magoula.  Togoguide (from which these maps come) has even helpfully labelled this area 'Prehistoric Ceramic'.  So we've got to be close.  In every other way it agrees with Simpson's directions.

But can we find the magoula exactly?  It can't be seen in Google Earth.  What to do?

I was wondering about all this when there came to hand a copy of Livieratou [2006] in which the sites in Phokis and Lokris are discussed.  And there, on p. 111 was a full-color photograph of that very magoula taken from the south.[3]  Here it is:

Ooof!  Not very good although I can tell you that it is much repaired over what it was.  Actually the photograph doesn't provide very much in the way of identifying information at all.  A mountain outline, a road, a rise, some telephone poles.  It's a kind of photographic haiku.

I went through, numbering the telephone poles and whatever other features I could pick out.  I took a good look at the outline of the mountain range to the N.  And I also took a very good look at that road in the foreground.  It might just be possible to find that road since we know what to look for.  Anyway, the result of my analysis produced this:

This shows the result of analysis.  I numbered the telephone poles from P1 to P4 and I was also able to identify a house at the extreme right edge and a tree growing on top of the magoula.

Can we find those things in Google Earth? 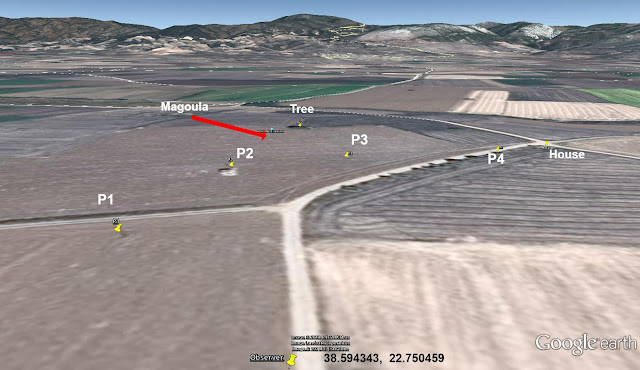 If you want to follow this example you should get into Google Earth and try to find those telephone poles.  They're very hard to make out.  I may not have matched them up correctly but I think that they're correct.  The center of the magoula is at the blue marker.  I make it to be  38.595921° N, 22.750690° E.

O.k., you say.  'It looks like a rise in the ground but how do you know that there's really a rise there?  Maybe this is just normal fluctuation in Google Earth's representation?'

There's one last thing that we can do.  Google Earth provides a view shed feature.  From any point GE will indicate all the areas that can be seen from that point.  What happens when I invoke the view shed feature from the hypothetical observer's point of view?

I went ahead and did that and the results are as follows: 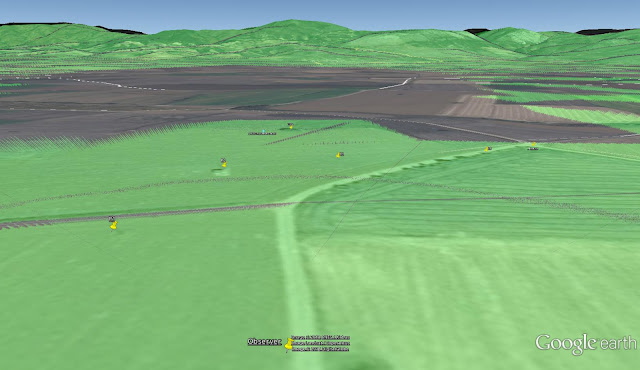 This is like the previous photo but with the view shed indicated in green.  Everything in green can be seen from the observer's view point which is at the bottom center of the screen.  Sure enough the rise in the foreground blocks out everything beyond until we reach the mountains.  Just as in Livieratou's photo with which you should compare this.

If you look in the letters section you'll see that Anonymous encourages me to set the vertical exaggeration factor to 3 in order to magnify the vertical differences and make the smaller rises easier to spot.     Anonymous is right.  Manipulating the VE can often be incredibly helpful.   In fact I’m constantly going back and forth between 1 and 3 on the vertical exaggeration control.  But despite that I’m not convinced that setting the VE to 3 in this case gives us any unambiguous evidence.

Here’s a trick that I also like to use.

Click on the path control and then draw several path lines directly over the feature you’re trying to learn more about.  I show a path here that is an example of what I mean.  The location is the same as in the post, C1600.

The blue paddle here marks what I think is the center of the magoula.  Once you’ve drawn this multi-segment path put your mouse pointer on one of the segments and click on the right mouse button.  This will pop down a menu.  Click on the second choice from the end: ‘Show Elevation Profile’.

When you do that GE puts up a display that shows the heights for every point on the line.

If the line you drew doubles back on itself the appearance of the elevation profile is vaguely periodic.  That just means that heights and depths are more strongly pronounced and seem to reflect each other.  It’s like taking slices out of the magoula.  You can quickly see where the high and low points are and how different they are from each other.  GE also shows you the maximum height; here 142 m. – and the low which is about 135 m.  This is a difference of seven m. or about 22 feet.   Sounds about right for our magoula.   It turns out that the high point is about where I thought it was.  Remember that the heights shown are only along the figure you drew.  It amounts to an elevation sampling.

You might do this several different times with different paths before you decide what’s what.

You can also do this in GE with circles or just simple straight lines.  But I find that the multi-segment path is very useful.  This is a powerful technique and I urge all of you to experiment with it.

For the Mycenaean Atlas Project DB release 50 has been delivered.  It substantially completes the integration of some 400 sites whose locational information was furnished through the generosity of Dr. Alex Knodell of Carleton College.

If anyone has corrections, additions, doubts, etc. about anything on the website then please send them to bobconsoli 'at' gmail.com

Here at MAP we always want to hear from people.  Follow me on Twitter (@squinchpix) and on Google Plus (Robert Consoli).  Please do it.  I need your support!

[1] The Innovative Geophysical Approaches for the Study of Early Agricultural Villages of Neolithic Thessaly whose website is here.

Livieratou [2006]: Livieratou, Antonia   After the palace and before the polis: study cases from the centre and the periphery; The transition from the Late Bronze to the Early Iron Age in the Argolid and Central Greece (Phokis - East Lokris), Vol. 1, Dissertation for the Degree of Doctor of Philosophy, The University of Edinburgh, 2006.  It is online here.

Database MAP_Rev_0.048__01_03_17 (DB 48) has been delivered.  It contributes some thirty new sites and approximately 100 new place features.  It continues the integration of contributions from Professor Alex Knodell of Carleton College.

Posted by Robert Consoli at 11:54 AM No comments:

The location of Amarynthos: Palaiochoria (C1223)

I’ve been looking just now for the site of Amarynthos: Palaiochoria on Euboea.  This was a small Mycenaean habitation site in the LHIIIB and LHIIIC.  I have called this ‘C1223’ and I originally placed it at 38.386937°, 23.924491°.  I am now convinced that this is not correct and I found out about this in an interesting way.  Let’s start with the sources.

What are we looking for:

Now these are mostly weak and undiagnostic criteria.  Nos. 1, 2, 7 are useless because these three things are characteristic of much of this Euboean shore.  No. 3 is a little more interesting but too vague to be of much help.  No. 4 deserves special condemnation.  Not only can our authors not agree but they do not say when this distance was estimated, whether the distance is from the center or the edge of town, and whether it is straight line or by road.  No. 5 is not very useful because there is at least one other location on this shore where this is true.  No. 6 only tells us that the hill is of modest dimensions; like most of them in this area.  No. 8 raises another problem.  When was it cultivated?  Is it still cultivated more than half a century later? 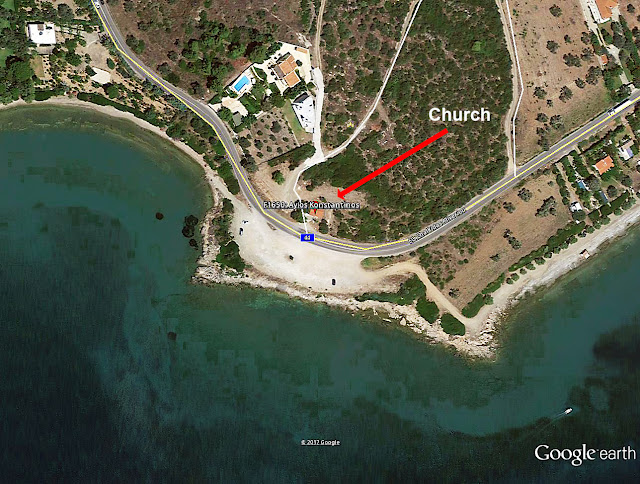 I wasn't convinced.   ‘How can this possibly be?’, I thought. 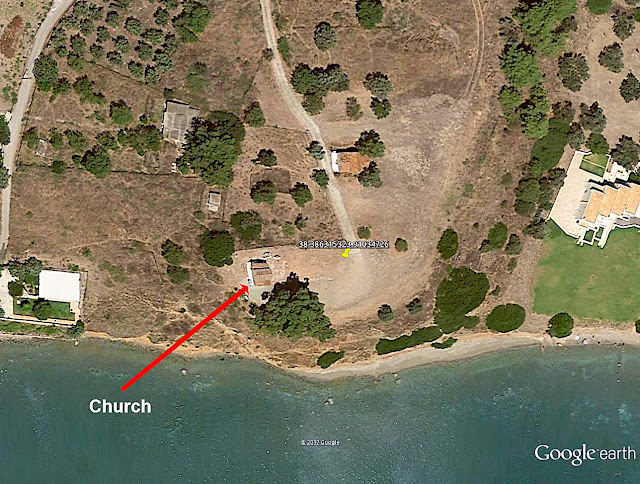 I took another look at his site and certainly there appeared to be a church on the edge of a cliff.  ‘Could this be?’, I wondered.

I went back to Sackett and took a look at his photograph of the site (I don't think that I'd done this originally).[3]  Here it is: 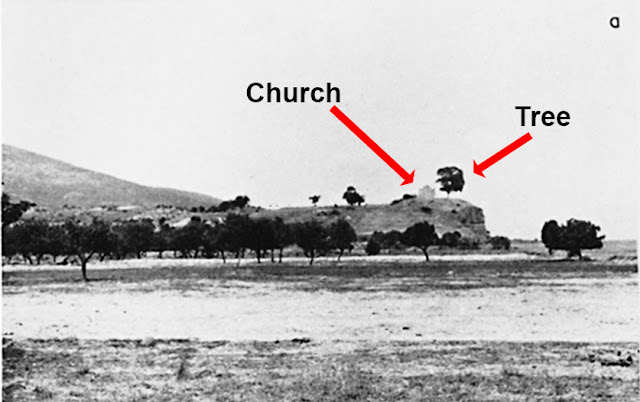 hurch of the Kimisis Theotokou (Panaghitsa).  The other, older, church is the church of the Metamorphosis.  If you look for them in Google Earth you'll notice a nice user-contributed photo of the older church, the Metamorphosis; the picture is labelled in Russian:  Древняя Часовня or 'Ancient Church'.  This photo is posted at 38.386612 N, 23.910107 E.

Alex Knodell was kind enough to send me one of his own pictures of this area.  This photo was taken from behind the smaller and older church, the Metamorphosis, and facing W.  The larger church on the bluff is on the left of this photo along with a piece of the giant tree on the face of the bluff which I mentioned earlier.  It appears to be some kind of Eucalyptus.  On a side note there are too many of these hydrocarbon-bomb Australian natives in Europe.  Portugal is covered with them and they are the major culprit in the forest fires that P. experienced recently.   Anyway, here is Alex' picture: 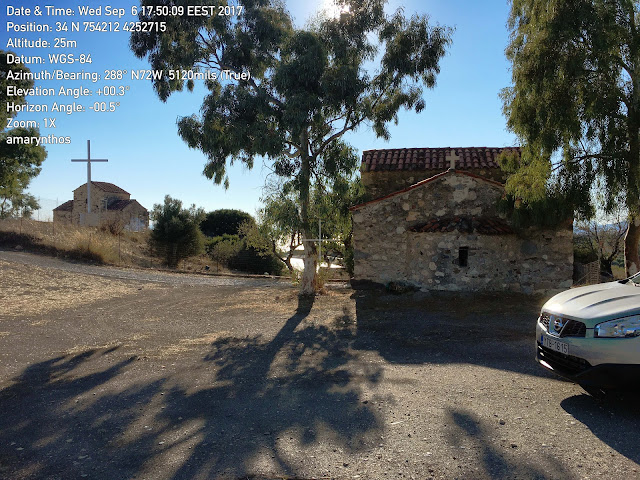 the frappe is the quintessential Greek cold coffee drink, made of nescafe, sugar, and water,  whipped up with a little gizmo that looks like a milkshake machine. It will give your system a caffeine catapult into instant alertness while at the same time roiling your insides in an equally unique way."
Jacquelyn, also identified this drink as a frappe.

Wikipedia is all over this; see the article: 'Frappé coffee' and especially the section entitled 'Greek frappé variations'.  I was curious about Alex' frappe maker and found one for sale on EBay.

Both Alex and Brady Kiesling brought to my attention the fact that Amarynthos is the site of the recent discovery of the sanctuary of Artemis Amarysia.  A recent account with photos is here.

New database (Rev 0.048) has been delivered to the MAP.   I am currently in the process of integrating geo-locational data for many places in central Greece and which was kindly supplied to me by Dr. Alex Knodell of Carleton College and Sarah Murray of the University of Toronto.

I always want to hear from people who have corrections or ideas about new sites that are not yet in the Atlas.