As a break from our regularly scheduled Bronze Age posts we bring you this:

Posted by Robert Consoli at 6:00 PM No comments:

Finding the site of Malesina - Hagios Georgios in Locris (C5169)

Kramer-Hajos' work deals with Bronze Age sites in Locris; it's probably the best overall source for Locris currently in print.  Some of her sites are quite obscure, not well-known and not published.  More than that I'm having trouble following her directions; particularly for the site of Malesina - Agios Georgios. 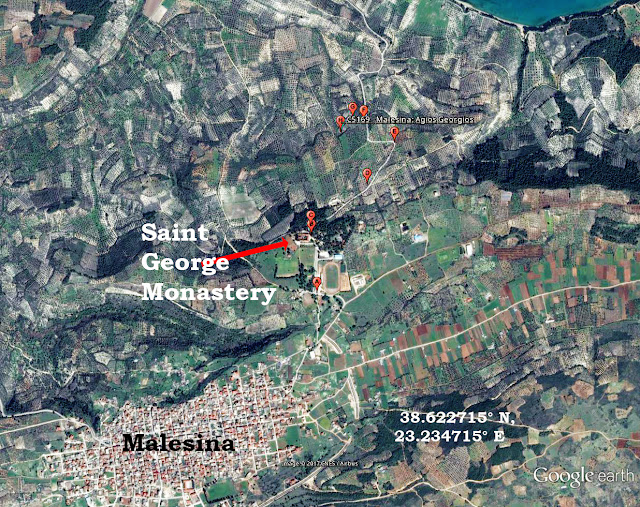 Here's a map of the general area.  The town of Malesina is at the lower left and I give its coordinates on the right.  Just to the NE of the town is the monastery of Saint George.

The actual site of Malesina - Agios Georgios consists of five excavated chamber tombs and in one of them a Mycenaean sherd was found.  The relative insignificance of the site is reflected in the obscurity of her directions.  See what you think:

Huh?  This is a good example of the kind of thing I'm always complaining about.  Is it too much trouble just to locate the thing with a lat/lon pair?  Apparently it is.  There are several ways to parse her directions but let's take it apart and look at it piece by piece.

a. follow  signs  northward to the Agios  Georgios  monastery.
b. Pass  by  it  and  keep  going
c. north to the  steep  slope towards the sea.
d. Take the second road  to your left ,
e. a sharp  turn,
f. and  again  the second road to your left .
g. Continue  on the dirt road  until  it  turns  right.
h. In the hill on your left five excavated chamber tombs are visible.
i. In one of them a Mycenaean sherd  was  found.

Let's take these one at a time and at the same time follow along on the map that I've made: 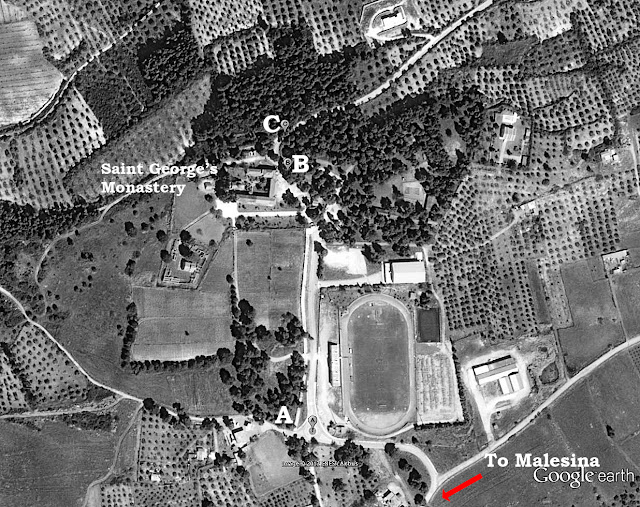 The first three steps are shown in the photo above.  Point A represents coming to the Monastery road from Malesina.  Point B corresponds to 'Pass by it and keep going ...'.  Point C represents the first problem.  Here you can go left or right but KH does not tell us which.  She simply says 'north to the  steep  slope towards the sea.'  I prefer going to the right (East) here.

In step D KH tells us to take the second left.   Here's what I think that looks like: 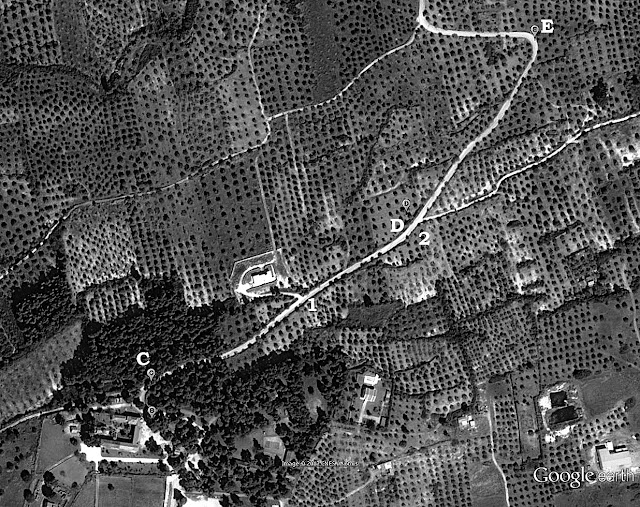 Continuing on from the turn at C we pass the driveway on the left (turn 1) and reach the fork at D (turn 2) and take the left fork.  That's what I believe she means by taking the second left.  That would make the sharp turn in step E correspond to the sharp turn at E in the photograph. 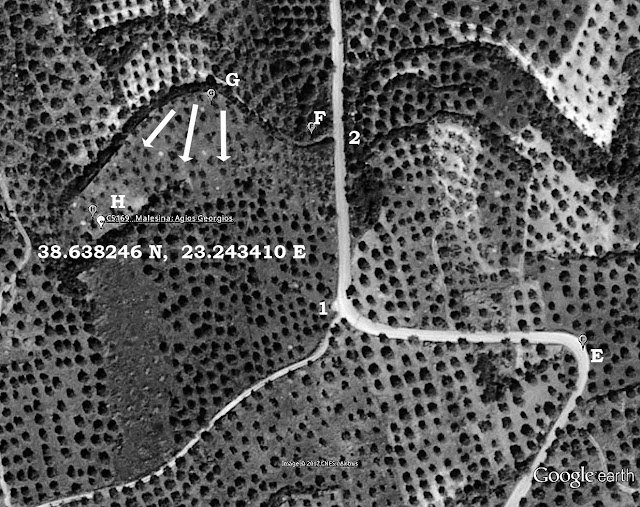 Now in this photograph we are following on from the curve at E in the lower right.  We pass the first left turn at '1' and then we come to the second left turn at '2'.  This corresponds to 'F' in our list of instructions.  We turn onto that road and go on until it turns 'right'.  I make that to be the point marked at 'G' on the photo.  The actual Chamber tombs are somewhere 'to the left'.  I've drawn arrows to show what I think that that means.  I've put the constructed location at 'H' but the tombs could easily be 50 m. or so to the east of this point.

Anyway, that's what I've been able to make out of her directions.  I'd put the odds of this reconstruction being correct at about 50%.  And when giving directions using the terms 'right' or 'left' please remember my cautions in the essay #Things_Mycenologists_Say which I linked to above.

I just delivered what I hope is a much-improved software version for this site.  It features a much better search facility but one which does not eliminate what was already there.  For the new features you can see the usage page which I rewrote.  Find it here.

Large changes like these can introduce lots of new problems and errors.  Please e-mail me with a complaint if you experience some bug or other.  I always want to hear from people who have corrections or ideas about new sites that are not yet in the Atlas.

Previously this website supported a miscellany of search methods.  There were separate methods for place-name search, place key search, and regional site search.  In this new release these methods have been combined into a generalized search method which now appears on all pages.  You can search for all the things you could formerly search for.  In addition any text string can be searched on and every instance of that string in the database will be returned with a link to the site page or feature page on which that string appears.  For example, strings such as 'vasilios', 'Simpson', 'Banou', etc. can now be searched on.

There is a new Feature Key page which gives basic information about all features (which are non Bronze Age things such as bridges, towns, churches, etc.).  Features can be searched for by using their feature key (which always begins with an 'F'), e.g. ‘F346’.

Regional site search now functions differently.  When you input a regional name such as ‘Laconia’, for example, you will see a list of all the sites in Laconia along with every other use of the term ‘Laconia’ on the web site.

There is a new Search Results page.

A change of this magnitude usually turns up glitches.  Please report problems to

An enhanced site usage section for the new changes is currently being prepared.
Posted by Robert Consoli at 8:13 AM No comments: