Achaia-Klauss and environs in the Prehistoric

Achaia has benefitted from much recent scholarship that demonstrates how pervasive Mycenaean culture was during the Late Helladic.  However, enthusiasts, and even scholars, when attempting to learn about Achaia in the Bronze Age, are faced with confusing and unclear maps as well as multiply-named sites that make it difficult to get a clear picture of Mycenaean influence in this time and place.

It is time for a series of clear blog posts that look at the important sites and which use clear maps for the purpose.  This post is the first in that series.  I have begun with the area covered by the orange rectangle in this next aerial photo.  Let's call this the Achaia-Klauss complex. 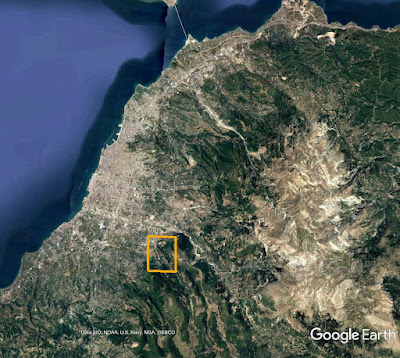 Many more details about these sites are available at the ID field links. 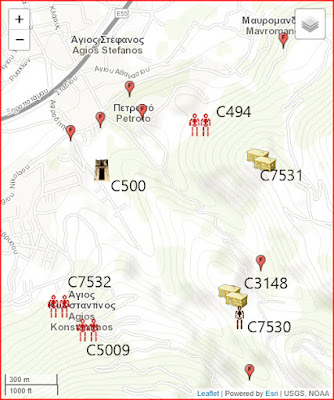 The region shown in the map is on the western foothills  of Mt. Panakaikos.  In this area the foothills take the form of long ridges orientated primarily NW-SE.  On the NW edges of these ridges, about 5 km.  from the ocean on the WNW and overlooking the plain of Patrai, a series of settlements sprang up in the Middle and Late Helladic.  Mygdalia (C3148) was, perhaps, the earliest of these settlements; its presence is attested as early as MH III.  A tomb associated with it (C7530) was constructed in 'early Mycenaean times'.  A second settlement at Skondreika (C7531) on the hill of Koukoura may have been a later contemporary of Mygdalia.  The owner of this site has refused access to investigators and little is known about it.  In the immediate vicinity there are two known cemeteries.  One is the well-known chamber tomb cemetery (C494) at the eastern edge of the Klauss vineyard.  The other (C500) is of tholos form and located at the west edge of the hill on which sits the Klauss winery.  The first  use of this tomb is given as LH II.
Two additional cemeteries are nearby and it is thought probable that they are associated with C3148 or C7531.  The first of these is Hagios Konstantinos Α (C5009) and the second is Hagios Konstantinos Β (C7532).  Panagiotopoulos suggests that the chamber tombs here were used from LH IIIA to C.
Posted by Robert Consoli at 3:55 PM No comments:

Where are the Chamber Tombs of Achaea Klauss? (C494)

For a long time the Mycenaean Atlas has contained a location for the chamber tomb cemetery at the winery in Achaea called 'Achaea Klauss'.  This is C494.  However I have never been entirely certain of this position.  Many archaeologists have worked at Achaea Klauss but they have all been decidedly cagy about exactly where the chamber tombs were located.  For example Papadopoulos says this:

"At the north-west foot of the steep hill Koukoura (east of Eglykas in the neighbourhood of the wine factory Achaea-Klauss and ancient Antheia) is a small field belonging to A.K. Skondras.  Kyparisses excavated twelve chamber tombs - variously called "Klauss", "Antheia", or "Skondras" in the PAE reports - and some others were found plundered."

While I'm sure that 'A.K. Skondras' is a fine and honorable person as well as a credit to the Greek nation it doesn't help us to know that these chamber tombs are on his property unless we're able to visit the land registry in Patras.[1] 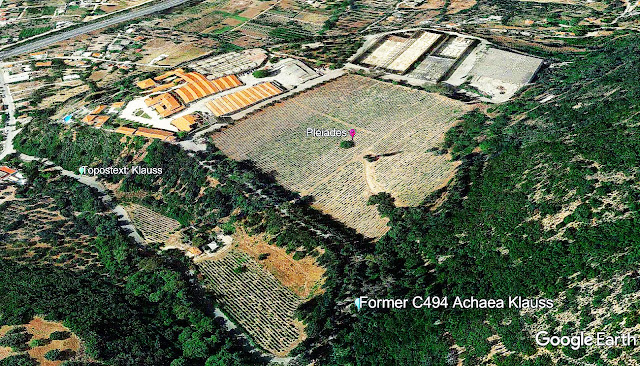 In the center is the large vineyard which lies behind the Klauss Winery (the orange roofs in the upper center left).  Pleiades places its marker for the chamber tombs in the center of the field.  Topostext puts its marker on the road just to the S of the winery.  My long-standing marker (C494) which is in the lower center right of this  picture is at the SE corner of the vineyard and in the woods.  Which of these, if any, is correct?

I just recently ran across Paschalidis [2018] and while he and his team are just as cagy about the exact location as all other archaeologists he does let the mask slip just a bit and the result is a much more reliable location for Achaea Klauss.  In that work (Fig. 5 on p. 8) he  publishes the following photograph: 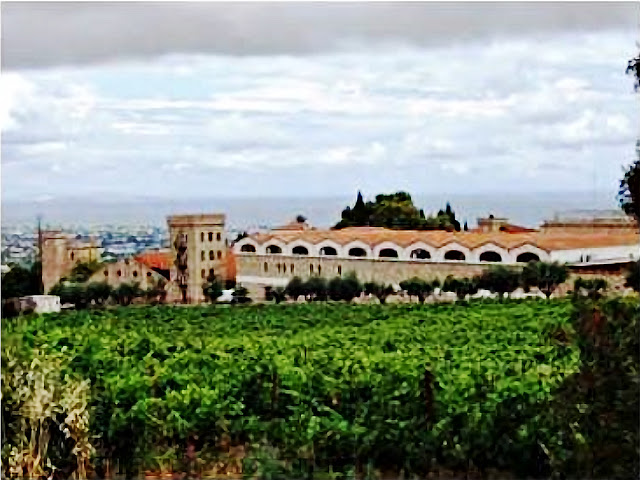 The caption reads "Fig. 5. The vineyard of Achaea Clauss wine factory as it looks from the cemetery site (from southeast)."

Crucially this picture is taken from the chamber tombs.  This photo shows the east front of the Klauss complex, most notable are the two towers on the left.  I reproduced this view in Google Earth in the next picture: 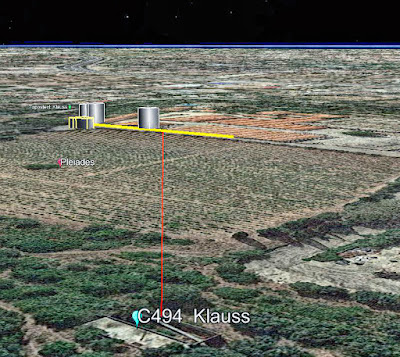 In this photo from Google Earth the Klauss winery is in the lower center.  The red line is the axis along which the previous picture was shot.  When we follow that red line from Klauss buildings to the foothills we find the location from which the shot was made.  That looks like this:

On the right-hand side of this picture is the location of the Achaea-Klauss chamber tombs.  Let's blow up the right side and see where the photograph was taken from.

And right at that point there is a large structure.  I don't know that that structure corresponds to the archaeological dig but it is not inconsistent with it.

At any rate I have now moved my point for C494 in the Atlas and I have much more confidence in its new location.

Simpson and Dickinson [1979]:  Simpson, Richard Hope and O.T.P.K. Dickinson. A Gazetteer of Aegean Civilization in the Bronze Age, Vol. I: The Mainland and the Islands. Paul Åströms Förlag, Goteborg. 1979., 'B 44 Koukoura (near the Achaia-Klauss factory)', pg. 87. Online here.

Posted by Robert Consoli at 4:20 PM No comments: