In praise of the telephone pole. Kato Goumenitsa (C521)

I sometimes think that the scholar of toponomy has no truer friend than the humble but sturdy telephone pole.  Kilometer markers are renumbered, torn down or stolen.  Towns may change their  places, churches their names and hills are levelled.  'Vineyards', currant patches, and wheat fields are now olive groves.  'Tall trees' are cut down, monasteries and nunneries are disbanded, but the telephone pole abides forever.  After all it costs the utility companies serious money to move them around and, as a result, they are among the most permanent of all man's creations.[1]

A case in point.  How shall we find Achaea's hill of Hagios Paraskeuei on which sits an important graveyard of the LH IIIA-C?   We have a photograph of the site which is all but useless except for one thing ... it shows a telephone pole.

The picture I refer to is from Papadopoulos [1978]. [2]  I have balanced the contrasts in Photoshop and sharpened the result.

First of all notice how this photograph tells us almost nothing at all.  He calls this 'Paraskevi Hill' but it's not clear whether this is the surface in the foreground or the hill in the middle distance.  I have talked elsewhere about the  use of photographs in academic publishing and I have stressed the idea that photographs will not stand by themselves.  They require extensive text accompaniment so that the reader will take away the desired information.[2]  Papadopoulos' photo fails on all these counts except for that one blessed telephone pole.  Can we recreate Papadopoulos' scene and by so doing locate the chamber tomb cemetery?

In order to do this I set out to find every visible electric or telephone wire (I lump them together since I don't know the difference) in that region which is visible in Google Earth.   Here's what I came up with.

I then set out to map every pole that I could see:

All the telephone poles that I could find are marked in yellow.  Which, if any, is the right one?  Well, we appear to want a pole on a grassy ridge and in this map there are really only two candidates.

In this photo they're circled. 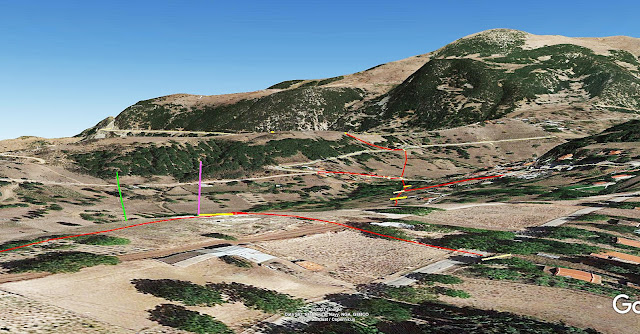 In this picture the electrical lines are still in red and the poles (which appear to lie on the ground) are in yellow.  A purple line connecting the base of the telephone pole to the ridge is 8.38 degrees E of north.  The green line is drawn from the base of the telephone pole to true north.  Part of it is hidden by the terrain.  I reproduce the Papadopoulos photograph for comparison: 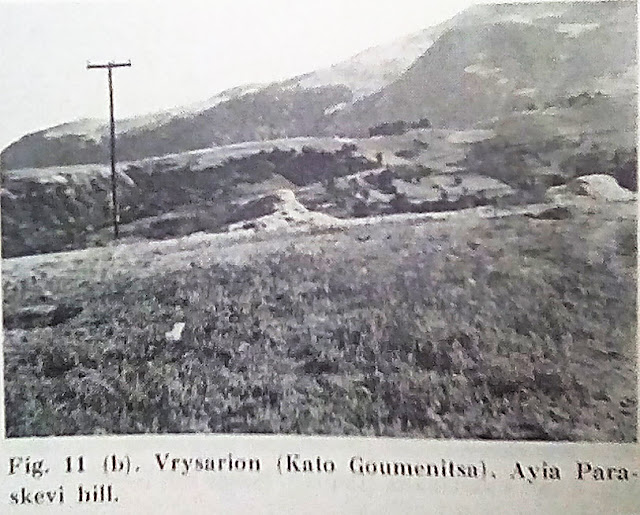 This south Achaean hill of Hagios Paraskeuei is significant because in the early 1920's Kyparissis investigated 12 chamber tombs there.

Kyparissis was the first serious investigator of what had already been recognized as a chamber tomb cemetery.  In succeeding years he continued to discover and excavate more tombs here.

The directions to the hill which are given by all the researchers center around several difficult toponyms.

B) Vrysarion/Goumenissa/Kato Goumenitsa: The name of the closest town to the ridge in Kyparissis' time was 'Kato Goumenitsa'.  This name was changed to 'Vrysarion' on Aug. 20, 1955.  The name was changed again from 'Vrysarion' to 'Goumenissa' on November 23, 1984.   We are liable to find all three names assigned to the town depending on our source.[4]

C) Hagios Paraskeuei hill.  The directions are simplicity itself.  One starts from the region of 'Vrysarion'.  One then descends into the ravine at Koudounomylos.  After ten minutes walk one ascends the hill of Hagios Paraskeuei and the chamber tombs are at the top of the hill.

So how do we reach the LH cemetery of Ayia Paraskeuei from Goumenissa/Goumenitsa?  Here is what our authors say:

1. Åström: "Outside Kato Goumenitsa at 10 minutes' distance from it, at the 72 kms. stone, one descends at the locality Koudounomylos to a ravine and ascends in 10 minutes to a white hill (c. 850 m. above sea level), whose top has been levelled off.  Chamber tombs had been found here ... "[5]

2. Papadopoulos: "At 10 minutes distance W of Vrysarion one descends at the locality Koudounomylos to a ravine, and 10 minutes later ascends a white hill called "Ayia Paraskevi".  ...  At that locality Kyparisses excavated 25 chamber tombs in his successive expeditions in 1925, 1926 and 1927 and Yialouris three more in 1959-60.  They belong to the early Mycenaean period ... "[6]

3. Alexopoulou: "The location is at the entrance of the village (Goumenissa, RHC) and on the left / west side of the road that leads to it. It (i.e. the hill we're looking for) owes its name to the homonymous church of Agia Paraskevi. From here to the area of ​​Koudounomylos in the N rises a cluster of small sandstone hills, on the plateaus of which are carved tombs of the Mycenaean period. The cemetery has been partially excavated."  (Greek language, my translation). [7]

It turns out that none of the directions make sense.

To begin with one must dispense with Åström's kilometer stones.  They no longer exist in the form seen in his (or Kyparissis' time).  There are new kilometer markers in this area (I was able to find two after hours of searching.) with numbers in the range of 33 - 37 or so.

Nor can one walk from  Vrysarion down to Koudounomylos for 10 minutes and then turn north to find Ayia  Paraskevi hill with its chamber tombs.   This invalidates both Alexopoulos' description as well as Papadopoulos' map which I reproduce below.

So where is the hill of Ayia Paraskevi?   The photograph makes clear what is intended.  The map puts the site N of the Koudounomylos Ravine (The route across it is the curved pink line) but the  photograph proves that it is really to the south of the Ravine and just N of the road.

So why would we walk down into a valley from Goumenissa, cross the valley, and then walk up a steep hill on the other side of the valley to reach the cemetery site?   Especially when we can just drive down road 31, park at the side of the road and then walk uphill the 70 meters or so to the site?  I don't know the reason but what I suspect is that road 31 did not exist in Kyparissis' time (not to mention the scarcity of automobiles).  A hundred years ago it may have been much easier to start from Kato Goumenitsa, pop down the hill to the Koudonomulos  ravine bottom and then up the hill on the other side.  This would have been close to a straight line (a distance of about 780 m.).  If that's so then we have a situation where the same meaningless directions about going down into the Koudonomulos Ravine have been handed down over the years long after they ceased to make sense.

1.  See these case histories: Gargaliano Megas Kambos 1 C390; Tsoukka C1922; or Aghia Paraskeuei in Boeotia C1600.   For a change of pace there are high voltage AC transmission  towers, e.g. the location of Thouria in Messenia.

Posted by Robert Consoli at 10:24 AM No comments: