In my last post I tried to locate a find spot on Cape Galatas on the northwest coast of Crete.  I did that by reproducing a photograph from Hood [1965] and I include the original photo (post processed by me) here: 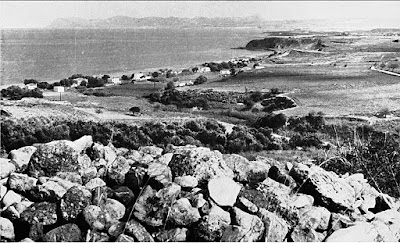 There are, however, two sites involved.  The one is on Cape Galatas and the other is in the foreground of this very picture.  The name given to it by Hood is 'Stalos: Vouno'.  On p. 107 of Hood's 'Minoan Sites in the Far West of Crete' we read this [1]

Dominant hill on the west side of the road to Stalos about half a kilometre inland from the sea (BM I :50,000, CRETE Sheet 2, PLATANIAS, 043/567). On the summit is a large pile of stones,  some of which appear to come from house walls. The few sherds recovered here by S. and R. Hood and G. Cadogan, October 1964, included one or two Minoan, among them a fragment of a tripod foot of thick oval section, but others Greco-Roman and Medieval or later. There might have been an isolated Minoan house here."

So.  A 'Dominant hill'.  The difficulty is to find the right hill out of so many in this area.  In my last post I reproduced the view in Hood's photograph.  This time I decided to determine the boundaries of that view.  Because Hood plainly tells us that the picture was taken 'Looking east from Stalos: 'Vouno' (C. 5)'  [2] then wherever those boundaries intersected ought to be the location of Stalos: Vouno and the pile of stones in the foreground are, I assume, the 'large pile of stones' to which Hood refers earlier.  Here is the result of my trying to draw these image boundaries: 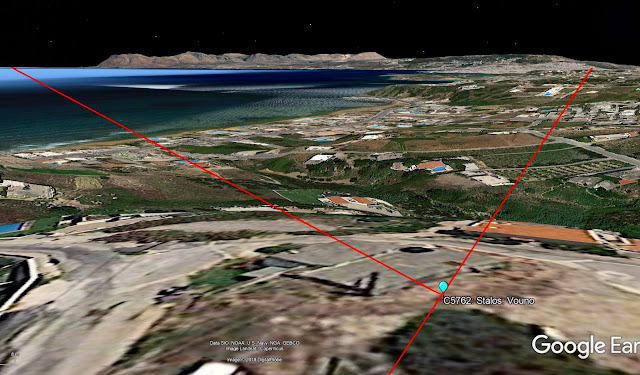 Where the lines intersect ought to be the photographer's position and, by extension, the site of Stalos: Vouno which I have termed 'C5762'.  Here it is again with labels: 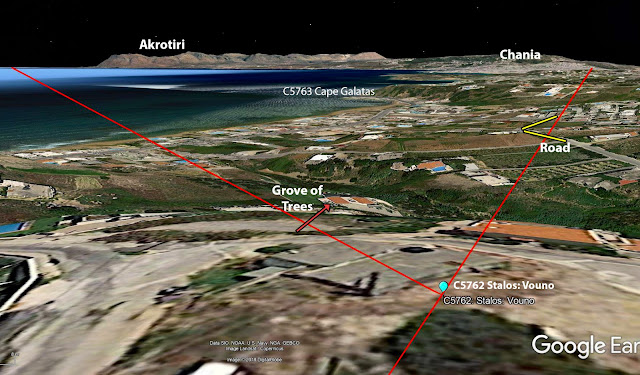 On the upper right edge of the original photo we see an old road that makes a bend from NE to E.  That road is still there and I have picked it out in yellow in this last picture. The grove of trees on the left has now been superseded by an elaborate home or hotel.  The pile of stones has, I guess, long since vanished although fragments may remain around the site.

The angle of view here is about 34° - rather narrower than the average normal lens (closer to 55°) which suggests that the picture has been cropped.  It may have been taken with a telephoto (extended focal length) lens although both the Akrotiri peninsula and the pile of stones in the foreground are both in focus.  In order for a telephoto (85 mm?) to do this would require the lens to be stopped down to f16 or f22 (not impossible in Greece on a bright day).  The lack of visible grain (to my eye anyway) suggests that the photographer used Kodak's Pan-X which was the most popular fine-grain film in those days.

The boundary lines cross at the place where I have dropped the marker - very close to an attractive resort swimming pool.  If this was the location of a Minoan house, as Hood suggests, then it would have enjoyed an extraordinary view.  We've already seen that the entire Akrotiri Peninsula is visible to the E.  Looking W the inhabitants would  have enjoyed this view which extends from the Rhodopos Peninsula to the island of Agios Theodoros.

Posted by Robert Consoli at 9:02 AM No comments: 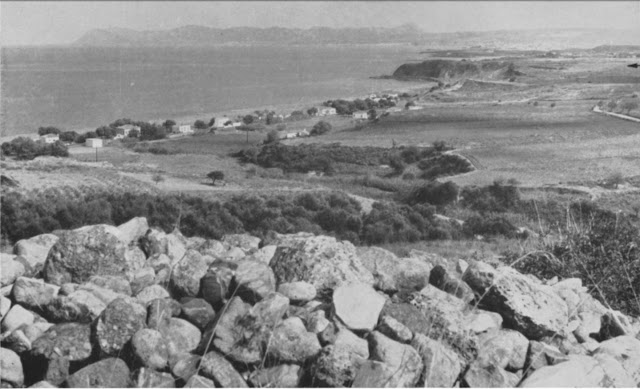 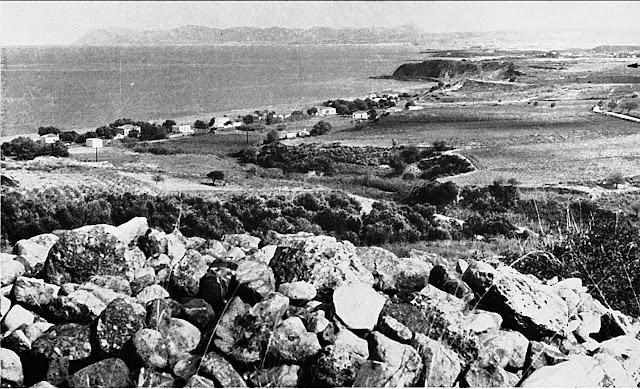 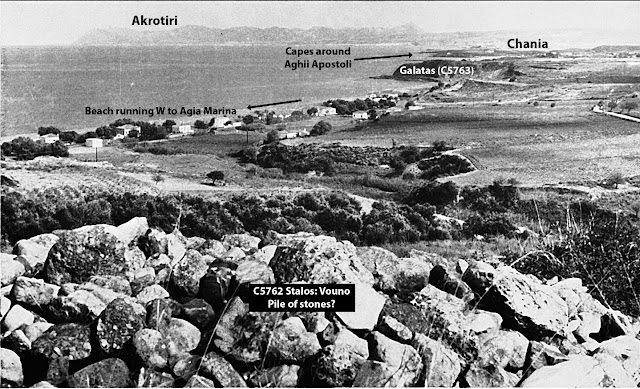 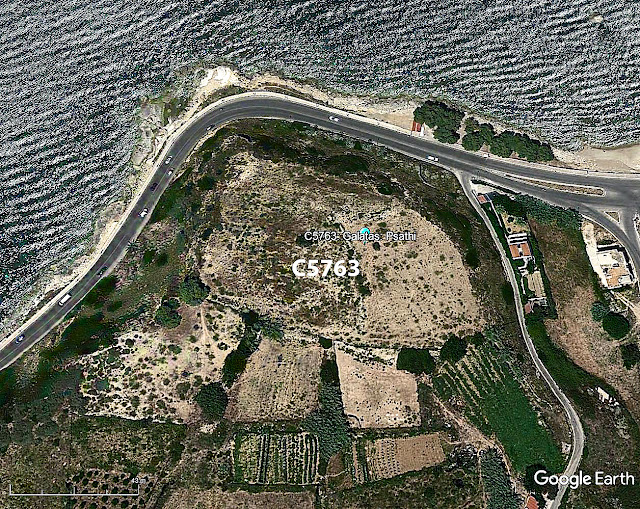 
Posted by Robert Consoli at 12:13 PM No comments: