The area of Euboea south of Styra is a wild forested country of zig-zagging ridges.  It was not densely populated at any period in antiquity and it remains sparsely populated today.    I've been adding find sites in this area to the Mycenaean Atlas by integrating Fachard [2012] and this brought me to an habitation site called Metsiphi.

The site of Metsiphi (no. 4 on the next map) consists of a six-room building and a boundary stone marking the border between the demes of Eretria and Styra.  It may be a construction of either the Archaic or the Classical period. 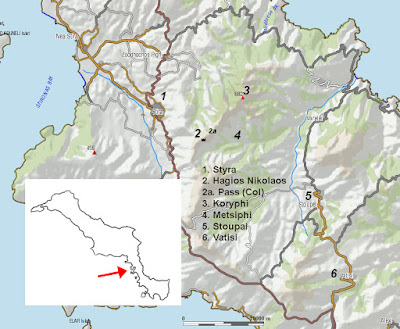 I was able to locate two sets of directions to this site.  The map above should help you in following them.  And, in order to make better sense out of the geography I include some place name definitions (marked with an asterisk in this text, thus Kiapha Pass*) in a glossary appended to this post.

“From the Kiapha* pass, located some 300 m north of the gate of the Venetian castle of Larmena*, you can follow an (ancient?) path towards the valley of Aghios Ioannis. About 1 km east of the pass, there is an old building and a rock monument, both discovered by N. K. Moutsopoulos.”(1)


The town of Styra, in southern Euboea, lies just to the north of a long mountainous ridge (Kliosi*) that runs north-east to south-west across the entire length of the island. There is a classical period fort (sometimes referred to as the Acropolis of Styra*, F5701) on this ridge and immediately to its east the Venetian castle of Larmena*(Armena*, F5654).   That would put the pass (col) at F5694 where there does indeed appear to be a saddle over the ridge of Haghios Nikolaos. In Google Earth I drew a circle of 1000 m. radius and centered it on this pass.  But without any specific thing to look for the chances of seeing an overgrown ruin in GE are basically zero. And, as for the toponym of 'Haghios Ioannis', it is undiscoverable on any map to which I have access.


I found another source which gives directions to Metsiphi. In Reber [2002] we read the following:

"In antiquity, two different routes led from Styra to Karystos. One corresponded roughly to the course of today's road, the other led first from Styra to the east and then followed the gentle slope of the northern slope of the Kliosi*. Via a saddle east of the fortifications one first came into a gorge and from there via a low saddle into the wide valley of Stoupaioi. From Stoupaioi, the path led through the mountains to the south, where it merged with the first path behind the village of Vatisi."(2)

"If you follow the path to Stoupaioi, which is partly paved with ancient retaining walls, you will find the ruins of an ancient building, which was uncovered by N.K. Moutsopoulos, below the saddle at Metsiphi." (3)


Karystos itself is at the south end of Euboea (F5697).  Kliosi* is another name for the ridge on which stands the Acropolis of Styra* (F5654).  Stoupaioi is at F5695 and Vatisi is further south at F5696.  And yet we still have no definite narrowing for the location of Metsiphi.

But as Reber does not specify the starting point these directions do not help. Are we starting from Styra again? From the col (Sattel)?  Just as Reder promised to get specific he starts referring generally to ‘the path to Stoupaioi’. This path is a long one and through wild country; it will not help us to find Metsiphi.

Well, it turns out that Reber does provide a photograph of the Metsiphi house in question. Perhaps it’s possible to duplicate that view in Google Earth. Here’s the picture: (4)

I looked at this for a while and I decided that if it were possible to identify the mountain in the background it might be possible to draw a line back from that mountain to the site of Metsiphi.  At this point I really had no hope of locating Metsiphi exactly.

Could this view be replicated in Google Earth?  On my first attempt I came up with this: 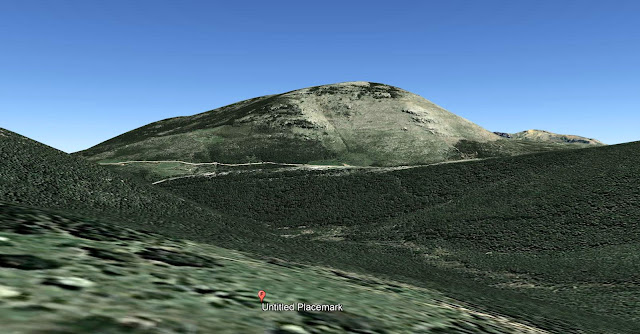 It was gratifying to come so close on the first attempt.  It turns out that the  background mountain in this picture is Peristeri (F5693).   But it was clear that I hadn't yet succeeded in finding Metsiphi.  In Reber's original there is a ridge in the right center which is of lighter color than its surroundings.  That ridge does not appear in my reconstruction.  I continued to rotate the image in Google Earth until I had this: 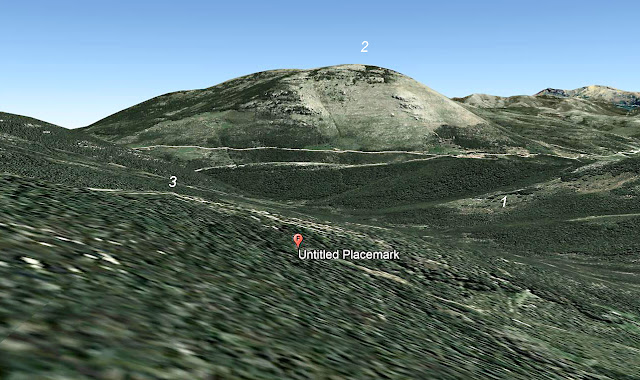 We're obviously very close to Metsiphi at this point.  Can we find it by searching around this point?  Not likely, but first let's see what we're looking for.  Here's the floor plan of this building as supplied by Reber:

I started to search in this area and in no time I found this: 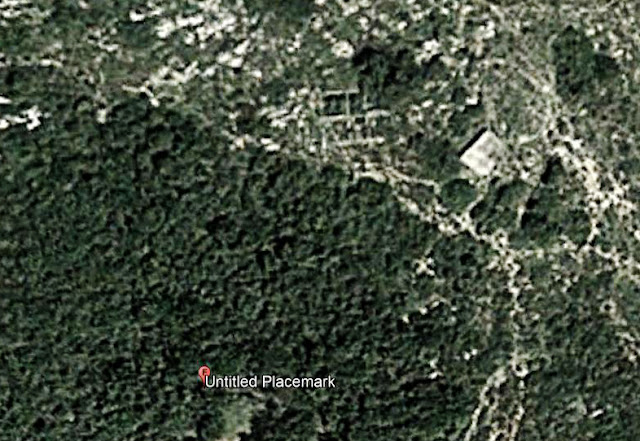 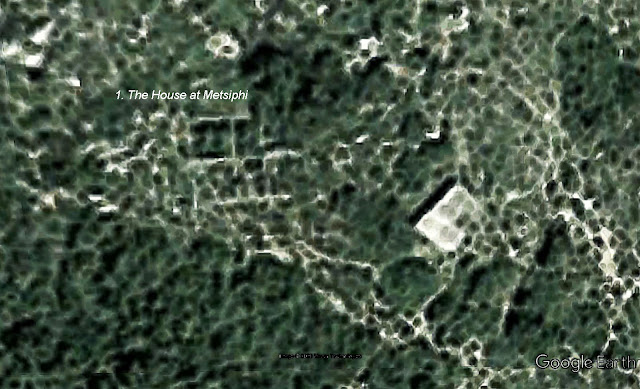 In this version I did a find-edges in Photoshop and then multiplied it against the picture layer.  To say that I was astonished when I saw that grid shape is an understatement.  This is a difficult country.  I'd been looking for an entire day with absolutely no expectation of finding the exact site but suddenly there it was.

And one last mystery to clear up:  What or where is the valley of Aghios Ioannis?

The valley of Aghios Ioannis is just the light-colored ridge which appears at the right center of Reber's original photograph.  It is just to the south and west of Metsiphi.  Here is a view of it from the air (N at the top): Google marks a church here which it calls Haghios Ioannis (F5698).  The area to the left was probably cultivated in ancient times.

About Metsiphi Fachard says 'The most probable hypothesis seems to us to be that of a farm exploiting the little valley of Haghios Ioannis."(5)

Here's my final reconstruction of Reber's photo as taken from Metsiphi itself (foreground): 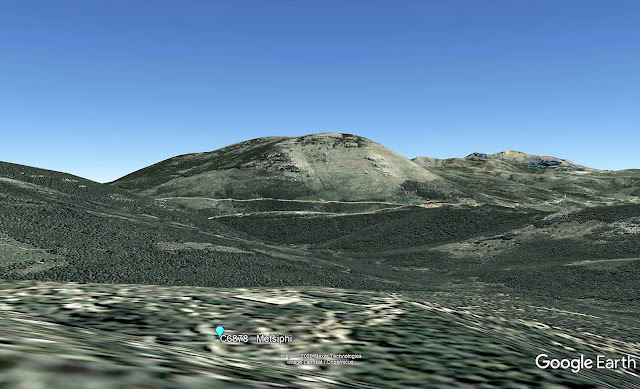 ... with Reber's photo again for comparison: 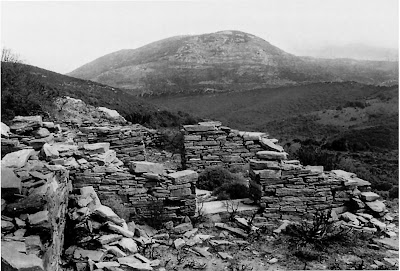 And a final map with everything labelled: The reproduction of landscape views in Google earth is a good technique that I have used successfully many times in the past and I encourage you who are trying to locate sites from photographs to try it.

I used the following geographic terms in the specific way explained here:

The term 'Haghios Nikolaos' (sometimes 'Diakofti') is reserved in this post for the small plateau at the west end of the Kliosi massif, elev. 648 m ( 38.146118° N,  24.262697° E).  It is right at the ridge-line and overlooks a small pass (called by Fachard [2012] the Kiapha Pass, F5694) just a few meters to the NE.  This plateau takes its name from a nearby chapel cut into the rock just off to the west and named for Haghios Nikolaos.  Do not confuse this chapel with the church dedicated to the Virgin (F5700, another Panaghia?), placed prominently at the center of this plateau.

In this post the name 'Armena' (also 'Larmena' and with numerous alternate names and transliterations; F5654) is reserved for the great 13th century walled stronghold located on Haghios Nikolaos.  This corresponds to Fachard [2012] 229, no. 170, 'Aghios Nikolaos: Château-Fort d'Armena'.

Just to the W of the fortress of Armena, and adjoining it, was located a classical period fortress (in Fachard [2012] 225, no. 169) of which some walls and a famous and often photographed gate are the principal remains.  There is a plan of the remains of this specific fort in Fachard Fig. 190.  Photographs of the gate are in Reber [2002], Taf. 10, nos. 2 and 3.  A very helpful map of both the classical fortress and the Armena fortress is given in Ducrey et al. [2005], 121, fig. 4.  This classical period fortress is often referred to as 'The Acropolis of Styra' (F5701) and I have used that name for convenience but Reber [2002] 44 casts doubt on the idea that it could have had such a purpose given its great distance (~ 2 km.) from that city and therefore this appellation should be used with caution.  Fachard [2012] calls this classical period fortress 'Aghios Nikolaos' (6) but I have reserved that name as the geographic designator of the entire plateau.

The Kliosi range (often referred to as a single mountain) is a long ridge that begins at the north-east of our area and runs to the south-west for about 15 km.  One of its high-points is Koryphi at 682 m asl.  Another is Haghios Nikolaos itself at 648 m asl.

Posted by Robert Consoli at 1:44 PM No comments: