When is an alona not an alona?

Recently I've been refining my knowledge of southwest Rhodes - I was never quite confident that I understood what was going on with Ayios Fokas (C1384) and Kymisala (C1383).
Let's look at the area in Google Earth: 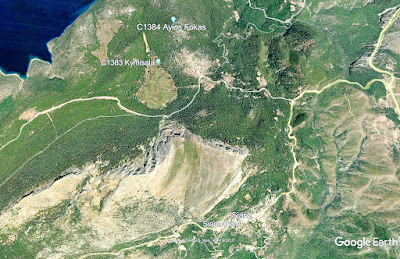 In this image Ayios Fokas is a hill at the upper center (C1384).  Simpson [1981] 197 says "Ayios Fokas was the centre of a considerable settlement in the Classical and Hellenistic periods, despite its elevated and remote situation." and  "The only signs of a possible prehistoric habitation site are a few coarse sherds found in 1970 on Ayios Fokas, including part of a lug of a type resembling Late Neolithic or Early Bronze Age examples ... " [1]
'Kymisala' is actually the name of a region, here shown in Google Earth in light green.  The C1383 marker sits at the top of this light green area.  This was possibly the remains of a lake but, already in Archaic times, had been converted into farmland, a use to which it is still being  put.  Simpson [1981] says " ... good arable land  ... in the  plains of Kymisala ... " [2]  The C1383 marker is placed where it is to indicate a complex of ancient cemeteries, mostly from the historic period.
I looked into McGilchrist's Rhodes in an attempt to understand what this area looks like today.  He gives a detailed description:
"After a further 4.5km, (1.5km before entering Siána) a track leads west (right) to Steliés (69km), and the empty, southern loop of Mount Akramytis.  Although little visited, there is a large area here— designated with the ancient name ‘Kymisala'— with widely scattered remains of habitation from the Classical and Hellenistic periods.  One kilometre down the track from the junction, on the right hand side, is an open area where the bases of stone walls of houses and other structures, constructed in large blocks, can be seen.  There is considerable overlay of later use, however, and the ancient blocks have in several places been re-arranged in circles so as to create winnowing areas. " [3]
Let's expand the map to show what McGilchrist is talking about: 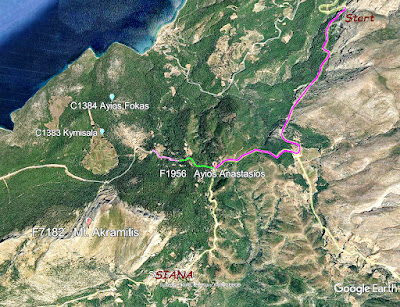 McGilchrist has already called out a scenic overlook which is at the upper right where I've marked it 'Start'.  He now has us driving S along the lavender segment of the line which is supposed to be 4.5 km until we reach the intersection and the church of Ayios Anastasios (F1956).  At that intersection we turn right, along the green segment, and on those two segments (the green and the second lavender) he draws our attention to some alonia (threshing floors).  Let's look at these in close-up. 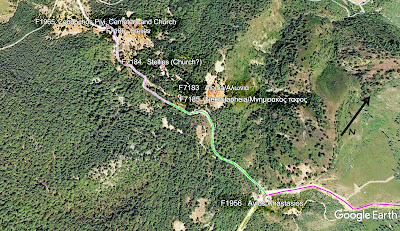 Starting at the lower right center with F1956 (Ayios Anastasios) we proceed to the W along the route marked in green.  At the end we encounter, at F7183, the alonia which McGilchrist mentions.  Let's look at these alonia: 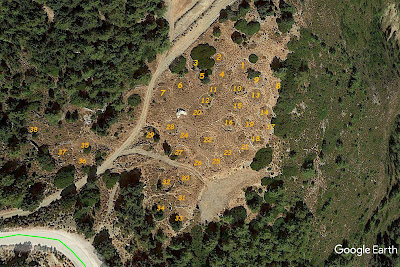 This seems amazing to me.  An alona is a threshing and winnowing floor.  You encounter them in most villages in Greece.  They are usually stand-alone although a single village may support three to five scattered around the edges of the settlement.  They consist of circles, perhaps 10 m in diameter, and with a smooth floor of concrete or packed earth.
Here are pictures of a typical alona (F3342) located at Kerteszi in Achaea.  The diameter of this alona, along the red line in the upper picture, is just over 14 m.
When grain is harvested, farmers use these surfaces for threshing which is the operation of beating the grain stalks with flails in order to separate the grain kernel from the stalk. [4]  Winnowing is the operation of using shovels (winnowing fans) to toss the grain into the air so that the breeze will blow away the chaff. [5]   There are various threshing methods but when reading about farm societies such as these it should always be borne in mind that threshing and winnowing are the largest consumers of energy on the typical farm.
What is going on here in the Kymisala area is astonishing.  As you can see I have numbered 38 definitely identifiable alonia (and there are certainly more).  Questions: Why are there so many and why are they packed all together?  I can conceive of no reason why alonia would be positioned in this way.  The Kymisala plain is a relatively small area that couldn't possibly supply enough grain in order to keep 40 or so alonia in operation.  The real alonia for the Kymisala plain would have been much closer to where the grain was actually grown.  And why are they packed together?  And another question: why are there no visible remnants of paved floors?   You would never winnow or thresh on the bare earth.  And I should think that being so close, that winnowing and threshing operations would interfere with each other.  The hypothesis that identifies these stone circles with 'alona' is not supportable.
What we see is more compatible with growing plants in stone circles to shield them from the wind and to retard evaporation.  Here is an example of such cultivation from Easter Island.  The Polynesian people there gardened in stone circles called 'Manavai'.    Here's a picture.[6] 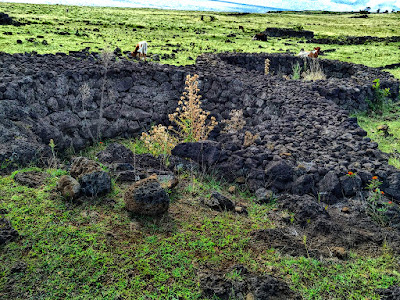 Santiago Cordero Guerrero, also on Flickr, submits the following picture which shows bananas growing in another of these manavai on Easter: [7] 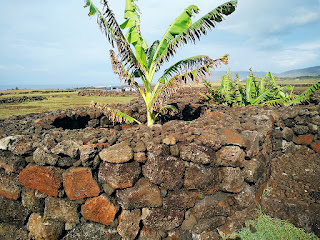 Of this picture Mr. Guerrero says:
"“Manavai”, pequeño jardín rodeado de muro. Estas estructuras circulares de piedra eran utilizadas para cultivar diferentes plantas al abrigo de los vientos y mantener así la humedad. Se cree que este método de cultivo está inspirado al observar el ecosistema que se crea en los cráteres de los volcanes como el Rano Kau o el Rano Raraku, en cuyo interior abunda la vegetación."[8]
Of course, because my suggestion is entirely hypothetical, it is quite impossible to say what plants or trees might have been cultivated on this open ridge line but it seems consistent, given the situation and the morphology, with a vineyard.
I have written a letter to Dr. Manolis Stefanakis who is the point of contact for the website eulimene.eu.  In my letter I ask about this area and I'll publish more on this if he replies.[9]
The sites identified so far can be accessed in the Mycenaean Atlas at:
Ayios Fokas  www.helladic.info/C1384
Kymisala  www.helladic.info/C1383
The 'Alonia': here.
Update: On September 23, 2022 Dr. Stefanakis kindly replied to my questions:
"The alonia (thresholds) are of later times (19th c. AD) when locals were cultivating cereal in the area. It is documented by the elder inhabitants of the area, who were still using them before the WWII. Of course, they are built with ancient materials from the nearby archaeological site.
I do not know of any other examples around Greece of alonia so thickly packed, to be honest..."
Footnotes
[1] Simpson [1981] 197, 'Siana: Ayios Fokas and Kymisala'.
[2] Idem.
[3] McGilchrist [2010] 230-1.
[3a] McGilchrist is just following recent research in this area.  A map published in eulimene.eu here clearly identifies this area as 'Alonia' ('Αλώνια').
[4] A good description of threshing is in Wiki, s.v. 'Threshing'.  And see the interesting video there which was shot in l'outre forêt in Kutzenhausen, Alsace-Lorraine.
[5] Again Wiki provides a basic introduction to winnowing.
[6] Find the original in the Flickr account of Elias Rovielo here.
[7]  Mr. Guerrero's Flickr account is here.  The picture can be found here.  A similar picture is here.
[8] "'Manavai', a little garden encircled by a wall. These circular structures of stone were used to cultivate different plants, sheltering them from the wind and maintaining moisture (i.e. slowing evaporation).  It is thought that this method of cultivation was inspired by observing the ecosystem which arises (se crea) in the volcanic craters such as Rano Kau or Rano Raraku, in the interior of which vegetation abounds."   My translation.
[9] Dr. Manolis is at the University of the Aegean, Department of Mediterranean Studies, Rhodes.  The excavation of the Kymissaleis area is described here.  It is good to know that there is ongoing research in this important archaeological area.
Bibliography
McGilchrist [2010] : McGilchrist,  Ian.  6. Rhodes with Symi and Chalki.  Genius Loci Publications. London.  2010.  Mr. McGilchrist's work is described on his website.  His volume on Rhodes may be purchased here.
Simpson [1981] :  Simpson, Richard Hope.  Mycenaean Greece.  Park Ridge, New Jersey: Noyes Press, 1981.   It is online here.
Posted by Robert Consoli at 12:33 PM No comments: