The area south of Kamari, in Messenia, is a lightly inhabited region of small farms and large olive orchards.  It is characterized by north-south running ridges which run from the outskirts of Kamari itself as far as the east-west running highway 25 which starts at Kalo Nero on  the coast and runs inland through the Soleima valley until it reaches Zeugolateio in the Pamisos river valley.  On the south side of highway 25 lies the wild and jumbled country of central Messenia which was, so far as anyone knows, nearly uninhabited in Mycenaean times.  One of the ridges running directly south of Kamari and stretching towards highway 25 was, in prehistoric times, the site of a great burial mound which is thought to have sheltered a tholos.  The literature of this site knows it as Kamari/Gouva[1].  What is this site?  It appears that, in prehistoric times, at the site location, there had been raised a great mound which (seems to have) concealed a tholos tomb.  At  some early period the mound was destroyed by robbers and their digging left a distinct notch in the ridge-line.  Simpson remarks on this:

"As one travels w on the road from Kopanaki to Kamari past the spring of Sanova, he sees on the w skyline what appear to be two artificial mounds quite close together. ...  On close inspection it turns out that there was originally one large mound and that its center was deeply dug out. From a distance the heightened banks of excavated earth create the impression of two mounds."[2]

We further learn from Simpson that there were many large flat stones lying around.  These were foreign to the place and are supposed to be the remains of the dug-out tholos which had been completely destroyed.   It appears that nothing datable was found in the place and so the significance of this site is somewhat limited.  But the enormous size of the thing and the effort that its destroyers went to suggest that this had been an important depostion site and, perhaps, linked to a hypothetical settlement found a short distance to the north (although its remains, in the form of sherds,  are somewhat exiguous).  So where was this (formerly) important site.  Luckily McDonald and Simpson have left us enough clues.  But first let's look at a map of the area.

Here is the area in question.  It is bounded by three highways that form a rough triangle.   Somewhere in the middle of this triangle is our site.

Can we be more precise about the location of site C173?  Luckily, in Messenia III, Simpson and McDonald give us good bearing marks and distances.  They say this:

In the Mycenaean Atlas these  place names correspond to these: 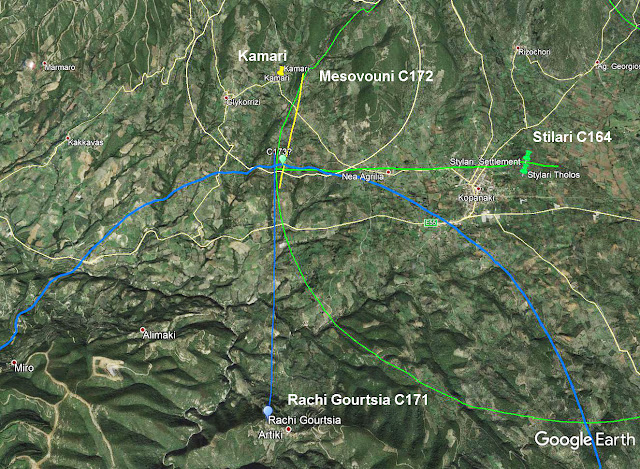 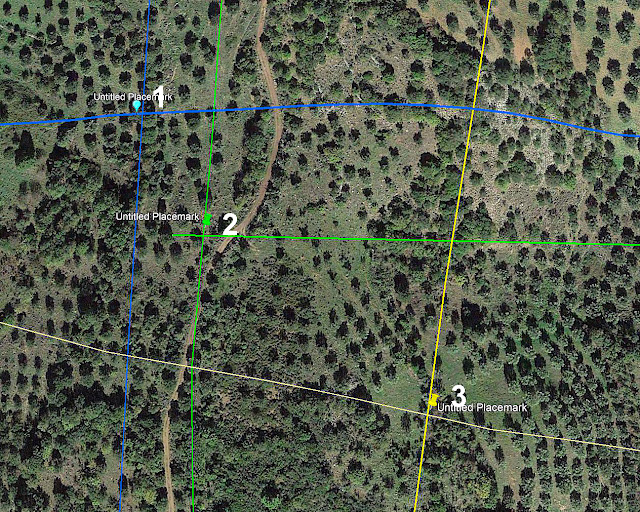 In the view just above we're looking directly west.  The construction lines are the same and the same push-pins are easily visible from far left center to center right, yellow, green, and blue.  Our site should be around here somewhere and, sure enough, just in the center the white push-pin denotes an area that is a dip and still has some remnant of wild bushes not completely overtaken by olive trees.  I suspect that this is our site.  To prove that it is a dip requires some additional work.

I went back into Google Earth and drew a multi-segmented line (the red line) criss-crossing the area of interest in generally a north-south direction.  I then did a 'Show Elevation Profile' which produced the image at the bottom.  The dark red vertical bar is the area just crossing our selected area (the white push-pin).  You can see that travelling from north to south that this is a local minimum.

When the lines are drawn running east and west a different story emerges.  Here's what that looks like:

From this we see that our location at the white push pin actually sits on a slope that runs from west to east.  So: a) in a dip from north to south, b) on a slope that goes from higher in the west to lower in the east.

I analyzed this site in my Atlas by choosing an 'Aspect' report for site C173.  This is what it shows: 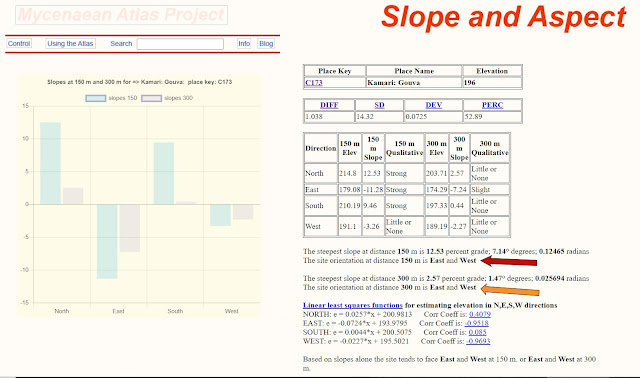 This report (you may have to enlarge it by clicking on it) shows that, at 150 m. from the center the aspect of the site is east and west (red arrow).  This means that the ground falls away from our site to the E and W.  At 300 m. the aspect of the site is also east and west (orange arrow).  But at both distances the slopes to north and south are positive which means that the ground rises to north and south but dips to east and west.  And it dips most significantly to the east.  And that makes sense.  Simpson would have been looking from the east and this notch in the ridge is what he would have seen.  Here's what it looks like in Google street view.

This is the view that Simpson would have had from the road going towards Kamari.  Off to the west the near ridge (some 850 m. distant) is clearly visible as is the dip in its outline.

I've updated the splash page for the Mycenaean Atlas to show some beautiful terra-cotta dancers from the New York Metropolitan Museum of Art.  You can see them here.

Posted by Robert Consoli at 10:44 AM No comments: