Tithorea and Neon: A Small Town in Phocis

Ano Tithorea (hereinafter Tithorea) is a town in Phocis which sits under the foot of the north face of Parnassos.  In the Mycenaean Atlas it is defined as C5152 and it is located at 38.583985° N, 22.668176° E.   It has always been a small town of shepherds and farmers and of no particular importance although in Pausanias' time it was the location of the most significant Isis temple in Greece.   Nor does it seem to have been of any great antiquity.  It was thought to have been founded after the Trojan war but the finds exhibited in the town don't go further back than the Archaic.[1]  In modern times it bore the name of Velitza until 1926[2].  More recently it has been eclipsed in significance by the growth of Kato Tithorea which is about 4.5 km. to the NE  on the right bank of the Cephissos River. 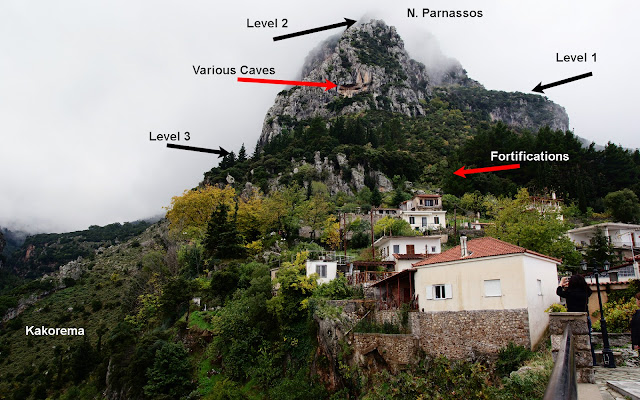 In this photo (taken from the church at 38.582526° N, 22.669754° E) the town of Tithorea is in the foreground. The photo faces S towards the first ramparts of Parnassos. The 4th century fortifications of the town are on the slope in the right center of the picture; more fortifications are out of sight to the right and behind the photographer. The deep ravine of the Cachales is to the left. On the hill itself (higher peaks are lost to sight in the clouds) we can make out at least three levels that could hold refugees. Level 3 is the lowest, a small flat area on the steepest part of the hill. Level 1 is a large flattened area in which the elevations vary by about 200 m. By my measurement it is just over a hectare in area. Behind the arrow marked level 2 is a larger flat area which is at least 25 hectares in area. Any of these areas would shelter people - not comfortably but in relative safety. And what we see in this photograph is just the beginning of all those areas on Parnassos which could shelter people.   Parnassos is also the location of many caves of which one can be seen in this picture. Another large cave, that of Odysseus Androutsou, is located just behind the arrow labelled ‘Level 2’ (On the M.A.P. it is F6229).  For more about these caves you can see the article by Sporn and Laufer [2019].
Ulrich’s idea that sheltering on the slopes of Parnassos would not have been practical is an argument with little basis. Shelter was to be found in many places on the slopes and as far as the forage line which is at about 1600 m. 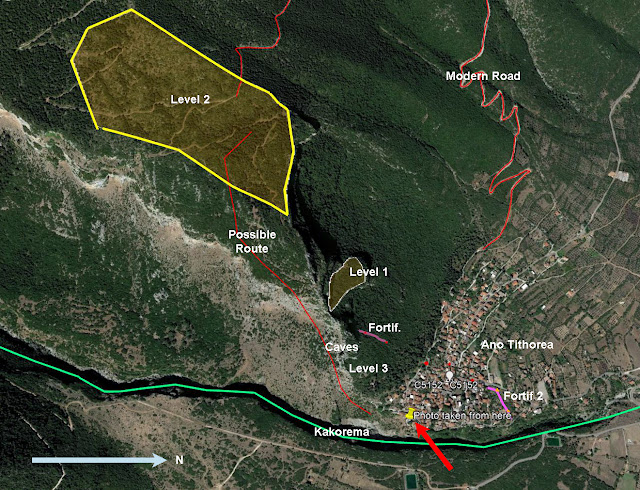 Here we see the same area from directly above in Google Earth.  The labels label the same  phenomena.  The photograph was taken from the yellow pin indicated by the red arrow. 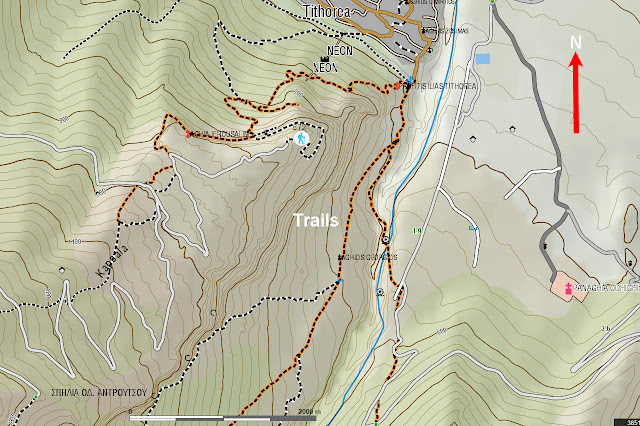 In this picture, taken from the Topoguide (http://www.topoguide.gr/index-map-en.php) web site we see the modern trails leading up from Tithorea and into the slopes above the town.  I suspect that it would have been little different in antiquity.
Palaio Thiva
If Ulrichs thought that the town of Neo was separate and somewhere else then where did he think it was?  It happens that Clarke had already identified the ruins of another town which was in his time called Palaio Thiva.  Clarke actually saw these ruins about which he says: "There is nothing to be seen upon the spot, but the traces of some walls, almost indiscernible; every other vestige having been long ago erased, to make way for the plough.  It is situate on the s. s. w. side of the CEPHISSUS, at an hour's distance from Turco-Chorio,  ... "[19]
Before proceeding I should say something about Palaio Thiva's location.  Only a few stone blocks are left to mark where it was and so its location is not precisely established.  Topoguide gives a region name of 'Palafiva' which I have placed in the Mycenaean Atlas at F6217.  If Palaio Thiva was located near the confluence of the Cachales and the Cephissos then it may have been located at F6245 which is where these two streams come together.  The following photo shows the region just north of Tithorea along the Cephissos (blue).  Here we see the much-channeled and depleted Cachales (green) where it meets the Cephissos.  It is here, approximately, that Palaio-Thiva was located. 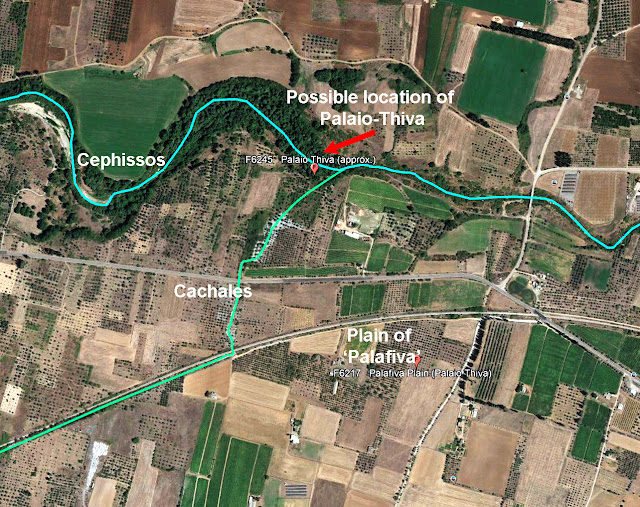