In my last post I discussed the location of a site called 'Gouva', near Kamari (UMME 236).  Gouva was a large tholos tomb from the LHIII A.  And just to recap some of the main points:

a. It has been robbed and destroyed. [1]

b. It had been so large that when the central dome collapsed (or was dug out) it left two little hills. [2]

c. These two 'bumps' on the landscape could still be seen from a nearby highway as late as the 1960's by investigators such as McDonald and Simpson.[3]

But now I have reason to think that I was wrong and that the real location is just a bit to the north.  A correspondent of mine in Greece, Pete, has actually been to this ridge and walked the whole length of it looking for features that might fit our tholos.  He reports:

"I took a general walk around the area either side of the ridge. Going much further south got difficult as the ridge was overgrown and I was weary of snakes in the undergrowth. Of course low scrub and trees make judging any details difficult but I can usually spot a point of interest or identify an area that might fit the bill. So none of this is conclusive, but I offer a suggestion for consideration.

I note that the report stated that the mounds were on the skyline and looked like two small hills. Or some such. So I took a walk along the skyline ridge route. I started a little further to the south of the area you had indicated and walked north, along the top of the little valley and up to the highest point some tens of meters away. Just beyond that high point (mostly covered by bushes) there was a cleared stony/earth field with a somewhat obvious mound near the higher, west side. The mound had a shallow dip in the middle."[4]

What does he mean?

This next image shows the area that he's talking about.  The various camera icons indicate where Pete was standing when he took these photos; the color matching rays indicate the direction the camera was facing.  (Photo 12 is a panorama.)  His suggested tholos location is the white circle and its lat/lon position is 37.293955° N, 21.782660° E.  North is at the top. 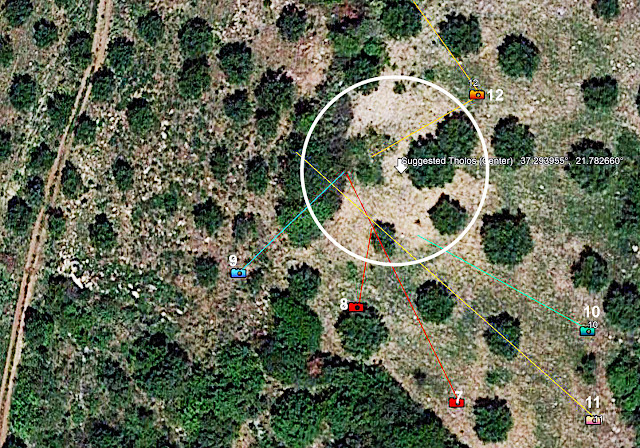 And in order to see his suggested mound clearly let's look at Photo 10:[5] 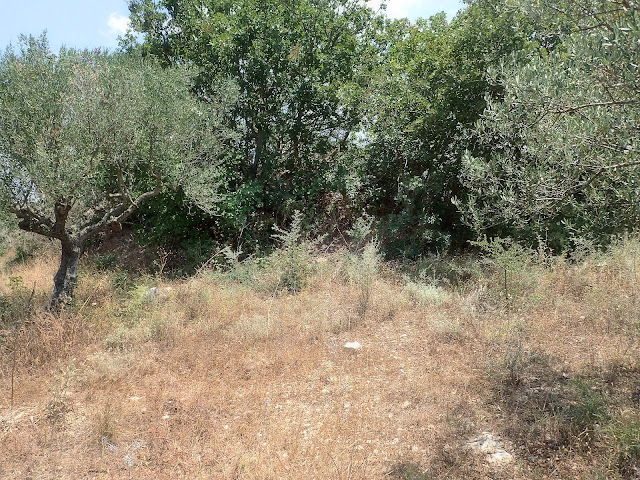 Pete has this to say about Photo 9:
"Image 9 is taken from 'behind' the mound in question I walked though the gap in the bush to the SW of the mound as I wanted to see what the other side was like. The mound was not so obvious at this point. It was "lost" in a long linear patch of shrub and undergrowth. In fact if anything there seemed to be a short, steep bank (which the shrubs followed) instead of a smooth sloped side to the mound.
In the photo one can see that the nearest olive trees are smaller and so I suppose this immediate area has been bulldozed in the last 50 years (probably 20 or so). That might explain the missing west slope of the suggested site. It had been removed by bulldozer and  the "cut-edge" left exposed and left to weather. I could not get too close but when I tried to see if there were any stones showing I was not able to see any clearly. I did not see any regular pattern of placement of stone or anything proving or strongly supporting this as a site for a tholos. The exposed parts of the bank were composed of a gritty red earth with a lot of stones."[6]
Photo 12 is a panorama which looks at the site from the NE.[5]

So.  Is this site correct?  Or at least does it fit the description in Messenia III?
Here's what McDonald and Simpson report:
"As one travels w on the road from Kopanaki to Kamari past the spring of Sanova, he sees on the w skyline what appear to be two artificial mounds quite close together.  The N-S ridge on which they lie is at least 1 km. from any road.
On close inspection it turns out that there was originally one large mound and that its center was deeply dug out.  From a distance the heightened banks of excavated earth create the impression of two mounds.   ...    The shrubs that have since grown up in the crater suggest that the excavation may have been as much as half a century ago.  Perhaps the crater explains the local toponym of Gouva ("hole")."[7]

Can we find the road?  Can we find the spot from which McDonald/Simpson were when they saw these two mounds?
I think we can.  The stretch of road along which they were travelling is shown here: 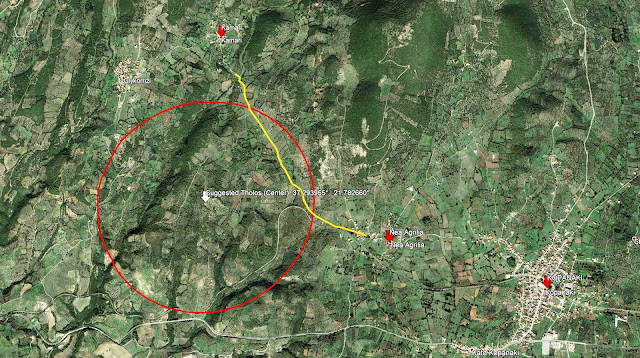 The yellow line is the road of travel.  In Google Maps the road is labelled 'Epar. Od. Chanion-Naou Epikouriou Apollonos'.  Kopanaki is in the lower right under the red arrow and Kamari is on the upper left center under another red arrow.  The stretch of road from which McDonald/Simpson could have seen the twin mounds is somewhere along the yellow line and inside the i km. circle which is centered on the proposed new location.  This stretch of road leaves Nea Agrilia going NW and the traveler drops from the plateau on which Nea Agrilia is situated into a little valley (some 15 m. or so vertical distance) through which flows a stream (Topoguide says that it's called the 'Kopitsa') whose origin is on the N side of this road.  It turns out that the proposed stretch of the ridge on which the proposed location is positioned is only visible from the very edge of this plateau just before the drop into the valley.  This position is just to the right of the 1 km. circle on the line which represent the road.
Here's a viewshed of these valleys and ridges; it has its origin on the plateau edge as I just suggested 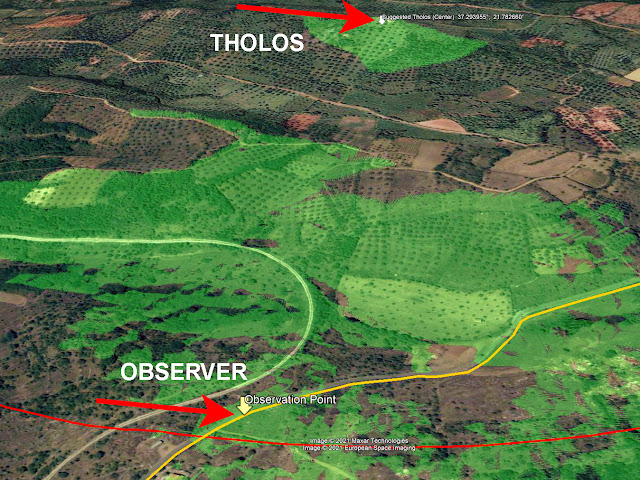 And I have another way of demonstrating this.  Incredibly Google Street View is available for this entire road.   I've made a photo of what that ridge line looks like from the suggested observer's position on top of the plateau.  Here it is:

O.k.  This requires a little explanation.  The road in the foreground (we're facing NNW) is the road to Kamari.  What's that gray thing?  It turns out that when you draw a line in Google Earth and the extend it down to the ground you can often see that extended line in Google Street View.  This scene places us on the right road looking more or less west to the ridge.  The line here was drawn starting at the  proposed tholos position and extended to the observer's position just ahead of us on  the road.  I then extended it to create this unmissable indicator.  The left vertical edge of this figure is directly over the tholos and the ragged corner here imitates the changing elevation of the ridges between us and the observer.  To see where the line hits the ridge line it is enough to continue the edges with arrows to the point where they meet on the ridge. 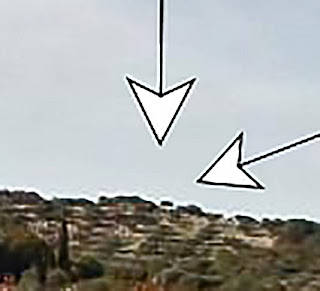 If Pete is right then this is the area of the ridge that MacDonald/Simpson would have seen.

Can we see two little mounds from here given that we know that they're there?  I'm just not sure.  The bumps on this ridge are consistent with what M/S saw but whether they're exactly the same we cannot now know.

A shout-out to Pete for his extraordinary work on this ridge!

There's just one more mystery to clear up.  Simpson says:

"As one travels w on the road from Kopanaki to Kamari past the spring of Sanova, ... "[8]

Where is the spring Sanova?  I'll deal with that in my next post.

[1] Messenia III, 137. ' ..., there is practically no doubt that this was a large tholos tomb that was excavated (presumably illicitly) and completely destroyed.  The shrubs that have since grown up in the crater suggest that the excavation may have been as much as half a century ago.'  This article appeared in 1969.  All the authors known to me who have described this tomb are simply repeating McDonald and Simpson.

[5] Pete's photos were heavily post-processed by me in Photoshop before publishing.  Typical operations consisted of contrast adjustment (sometimes selective), color-balance and enhancement, and sharpening.

All of Pete's photographs are licensed under the Creative Commons Licence: Attribution-ShareAlike 4.0 International (CC BY-SA 4.0).  This license means, in brief, that anyone may use, modify, or tweak this data, even for commercial use, as long as credit is given to the original author(s).

(All of the sources listed here simply copy Messenia III.  Aside from these there are no other reports of Gouva to my knowledge.)

Posted by Robert Consoli at 1:14 PM No comments: