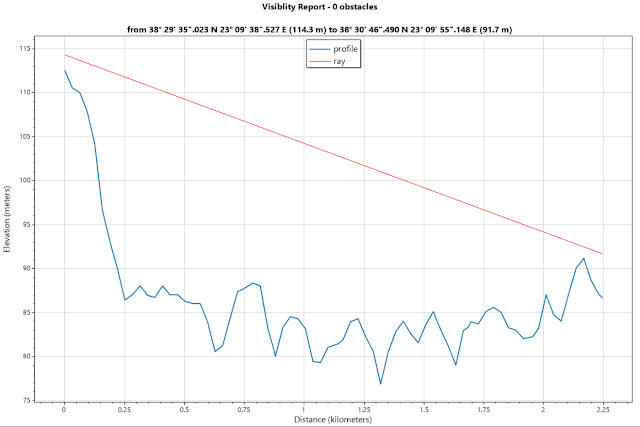 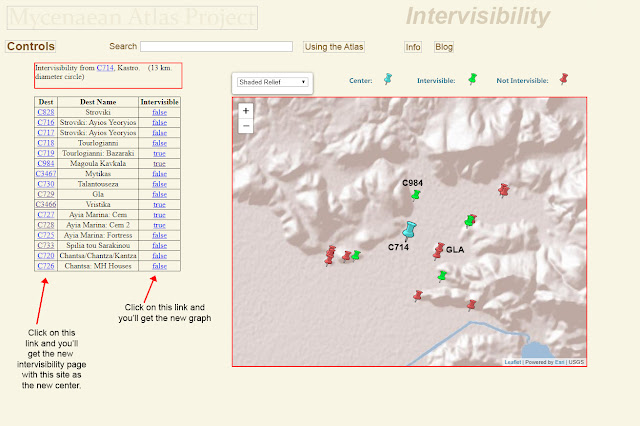 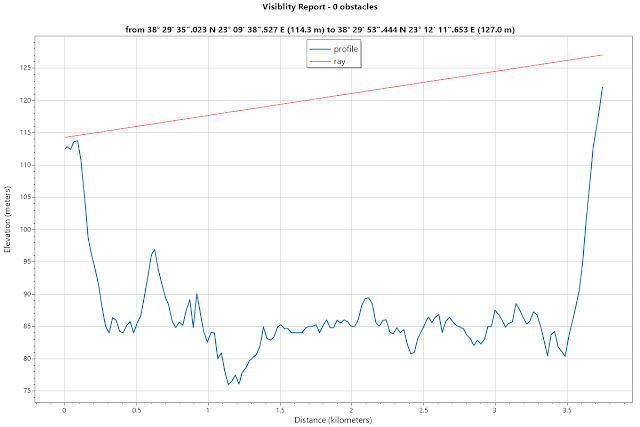 
Posted by Robert Consoli at 7:14 AM No comments:

Before the systematization of linear perspective in the 1400’s painters still needed a way to show that certain things in their paintings were further away. How did they do this?

They used a set of techniques that are collectively known as ‘aerial (or atmospheric) perspective’. These techniques consist of using certain observations about distance with which we are all familiar but which we rarely consider. Its principles are:

There’s a nice example of this in a painting from 1520 by Joachim Patinir:

Here we can clearly see aerial perspective at several removes. There is a slight graying of the fields in the center. This fades into the grayer and bluer mountains at the upper right.
These in turn transition to the entirely gray and nearly detail-free mountains on the horizon.

Time of day might be a factor in intervisibility. A town to the west that’s visible in the morning might be lost in the sun’s glare in late afternoon and evening. The reverse for towns to your east.

There’s also the curvature of the earth to consider. Consider that towns A and B are sitting on a perfectly smooth earth. At some distance town B will be below the horizon relative to an observer at A. What distance? Well, an object 10 m. in height (32.81 ft.) will be below the horizon at about 16 km (9.9 mi.). [2] This might be a factor in coastal town intervisibility. Otherwise the main factor in intervisibility is height above the horizon of the object to be observed. That’s why signal fires are placed on towers or heights.[3]

Sometimes intervisibility is achieved by indirect means. Crowe details how Polynesian navigators relied on the color of the underside of clouds to pinpoint islands still well beyond the horizon[4]

These are just some of the circumstances that might prevail such that lines of sight between A and B may be entirely unobstructed and yet B not really visible from A (or vice-versa).


Intervisibility consists of more than just unobstructed lines of sight.

But the Mycenaean Atlas cannot take any of these factors into account. Here the analysis is strictly mathematical – it seeks only to determine whether there is an unobstructed sight-line between location A and location B. This is achieved in the following way.

2. Now the function can be evaluated for any position on a line between A and B.  This is to determine whether any features between sites A and B are higher than the function value at that point. 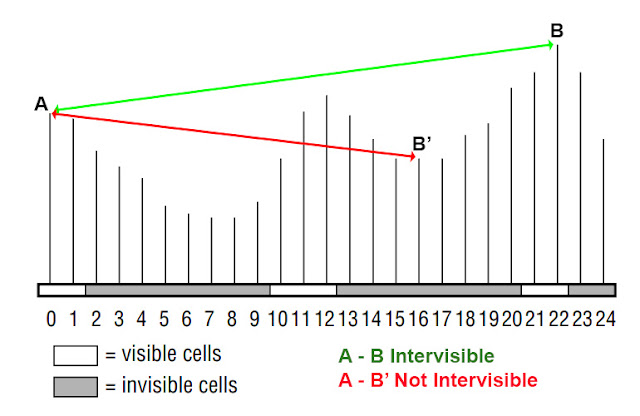 I have had the great good fortune to work with Xavier Fischer of elevationapi.com who, at my request, created a single call that returns the intervisibility status for any two lat/lon pairs. In my original design I needed an internet call for each point evaluated between A and B (at least 16). Such an algorithm runs on Oinp (order of time of average internet fetch * the number of pairs(A’,B’) * the number of partitions between A and B). With the new internet call of Mr. Fischer’s the new algorithm runs on Oip (order of average internet time * number of pairs(A’,B’).

When using this new algorithm I add 1.8 m to the start point to mimic an average observer’s height. This helps, I think, to make some sights intervisible which would not be so if the elevation of the observer was taken as ground level.  This would not be very realistic.

In the Mycenaean Atlas I have created an intervisibility page. It is reached from the Place Key Report by clicking on the new ‘Intervis’ button.

Clicking on that button brings you to this new  page. 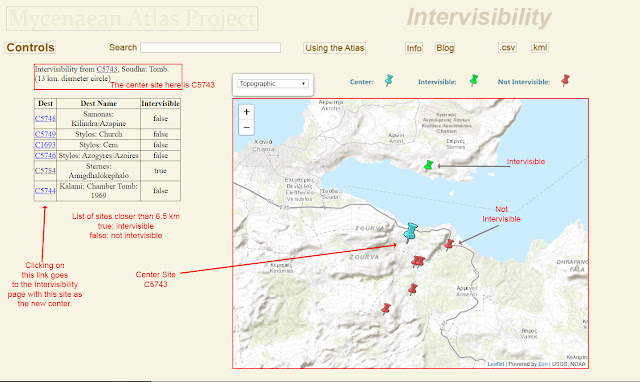 The main feature on this page is a map which shows the starting point (A) in blue.  Sites that are intervisible with A are shown with green push-pins.  Sites that are NOT intervisible with A are shown with red push-pins.  Each of the pins on the map has tool-tips which provide the name and place key of the sight.  If you click on a pushpin you will get an info box that contains more information along with a link.  Clicking on the link takes you to the Place Key Report page for that specific site.

The other main feature on this new page is the intervisibility list on the left.  This list shows all the sites that are within 6.5 m. from the center site (A).  Each line has a link.  If you click on that link you will be taken to the intervisibility page with your clicked-on site as the new center (A) site.  That way you can remain in the intervisibility domain while you check sight lines from various origins.  The list's intervisibility column simply gives the values 'true' or 'false' for each of the set of sites.  Each column in this list is sortable.

Here's one more view of our new page.  It shows the intervisibility from a  peak sanctuary C6228,  Petsofas Peak Sanctuary in Siteia.   Its elevation is 251 m. 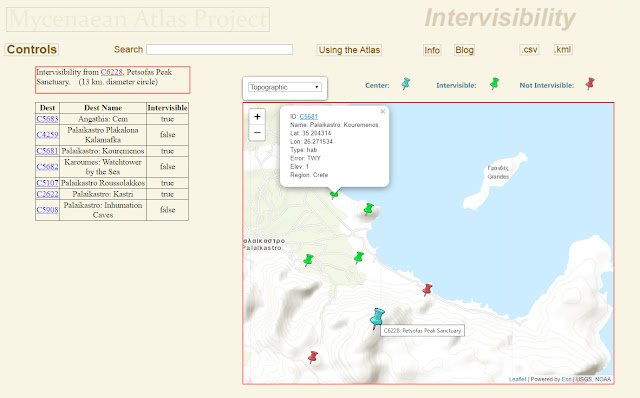 We can check the accuracy of this very easily in Google Earth.  I drew a straight line from the peak sanctuary at C6228 to C5107 which is one of the sites that is supposed to be intervisible with C6228.  I then did a 'Show Elevation Profile' on that straight line and this is the result: 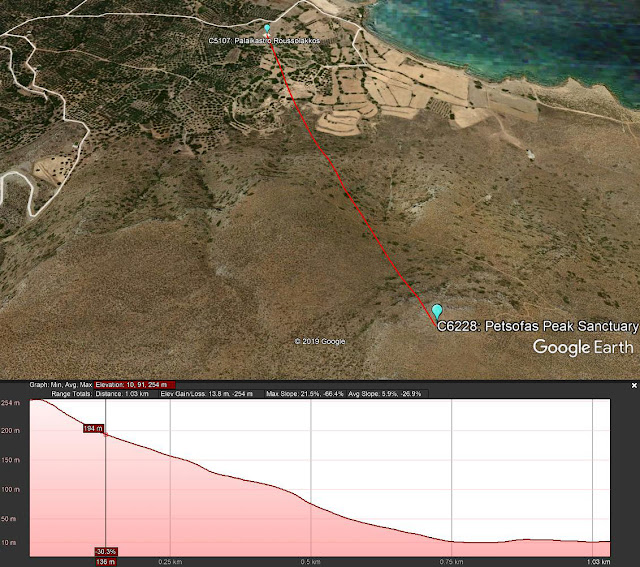 You can clearly see from the Elevation  Profile that there are no obstacles intervening between the two sites.

I hope that you will enjoy using this new tool and that you'll find it useful.

A general survey of the history of intervisibility in archaeological practice may, perhaps, be had here:

Two  nice case studies of the use of intervisibility as part of landscape analysis are:

I particularly recommend this article.  She proposes a number of hypotheses about the position of this tholos and supports or refutes them using intervisibility and viewshed ideas.  This is a good example of how it should be done.

[2] For a calculator see this.

[3] For an amusing discussion of signal fire parameters in The Lords of the Rings see this.

“In the case of a particularly shallow lagoon, the navigator even may be guided to it by the turquoise tint of the water reflected up onto the underside of a cloud. Striking examples of this include the unusually shallow lagoons of Aitutake (S. Cook Is) and ‘Ana ‘a (Tuamotus), where the presence of these low-lying atolls can be discerned in fine weather from up to 70 km away. This kind of phenomenon can show up in other cases, too, where the destination island can even be distinguished by the colour of the cloud hanging over it – a green tinge in the case (of) a forested island; an unusually bright cloud over white sand or surf, or a pink tinge warning of a reef.” And see notes 37-43 for this chapter.

At 70 km from the observer the curvature of the earth will completely occlude an object up to 334 m (1095.8 feet) in height.