The location of Aphidna and its tumulus

For many yearts it has been a project site of the Swedish Institute at Athens.  Their project website is here.  The acropolis itself is easy to find.  There is a photograph of the hill on the SIA website.  Here it is: 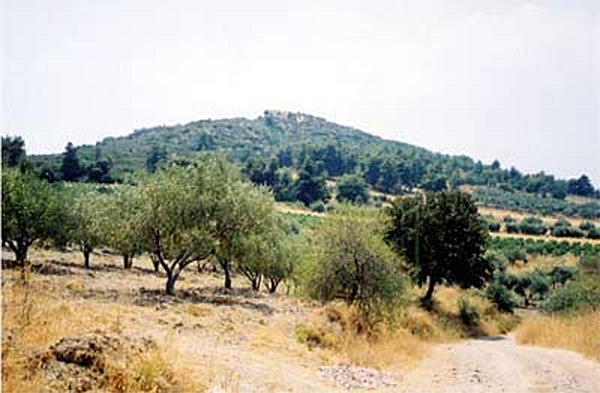 This is trivially simple to replicate in Google Earth: 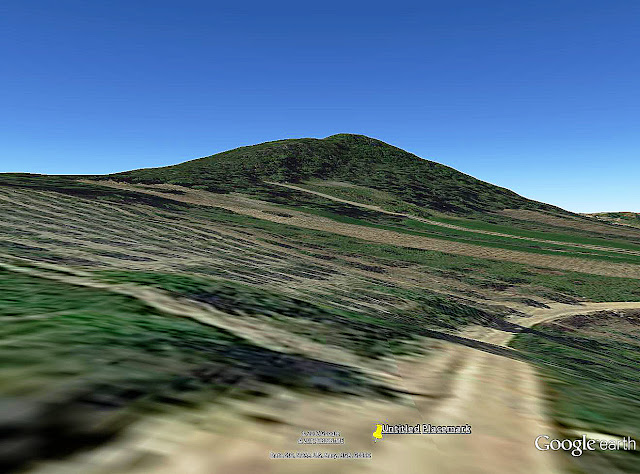 The Swedish School site tells us that Aphidna was 'an important fort protecting the northern Attic border.'   It was also on an important route between Attica and Boeotia.[1]

The Swedish School do not quite make clear that the tumulus is separate from the acropolis; about 1.5 km. distant from it.

The tumulus was first investigated by Sam Wide and the German archaeologist Bulle in 1894.  Wide returned that same year to investigate the tumulus with a colleague, Lennart Kjellberg.  Together they dug up a number of graves, retrieved many vases and sherds, and demonstrated that the tumulus was a Bronze Age construction.[2]   There is a description of the vases and fragments in Frazer [3]; the tombs in Pelon.[4]

Where is the tumulus?

Sam Wide tells us that on the German map he is using the mound is marked 'Grave with wall surround'.[5]  We are further told that it is south of the Charadra stream and about 25 minutes (walking) from the peak of Kotroni.[6]

Judging from Curtius' map Lake Marathon hardly existed in Wide's time.  In the following image the Charadra is shown in blue.  Let's estimate walking distance over this kind of somewhat rough ground at about 2 miles/hour.  25 minutes of this represents 0.8333+ miles or about 4400 feet.  In the next picture I center a 4400 foot circle at the Aphidna acropolis; the red circle.  I then drew a 1500 m. circle centered on the Aphidna acropolis; the green circle.  For this kind of work they are virtually the same circle and they give us an outer bound.  I then drew in what I considered to be a typical (i.e., entirely made-up) path.  That is shown in light brown; it is 4400 feet in length.   The straight yellow line has its origin on Kotroni and an angle of 202.5° (SSW).  So the tumulus is somewhere to the SSW of the acropolis, south of the Charadra, and within the 4400 feet (or about 1500 m.) circle in the 'low ground'.   The following image tries to meet all these constraints.  No matter how I tried I couldn't get them to cohere unless I also crossed the next little stream to the south of the Charadra (the Prepagouri?). The blue paddle marker (C1502) seems to me to be in the correct area.  I drew a confidence circle with radius of 300 m. (the smaller red circle).  Most probably the tumulus is somewhere within that circle. 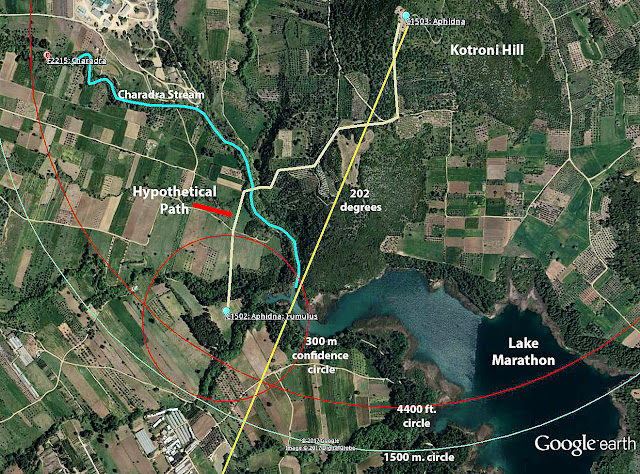 Without more information I can't get any closer than that.

Dr. Jeannette Forsén is the author of a recent paper on Aphidna [7].  In a personal communication of 11/05/17 Dr. Forsén writes as follows:

"Of course the large tumulus is more or less gone I think, due to farming activities and might even be in a fenced in grove, to which we have no access.  It is sad, but to my knowledge no one has been able to find any traces of Wide's tumulus - and many of us have tried." 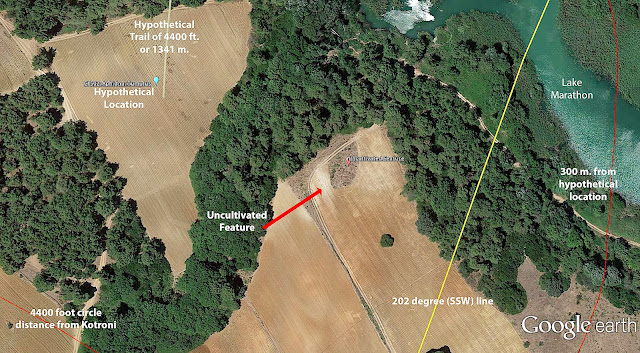 It resembles a pile of stones that may or may not have been bulldozed into a corner.  She replied:

"Indeed this feature I have seen myself, it was completely overgrown, but may very well be what is left of the tumulus.  In the same field around the larger tree of that field there was some pottery also, but nothing stood out."

In this composite shot we see this feature at several different times of the year.  The dates are the dates of the Google Image used.  One thing to notice is that this uncultivated feature seems to contract over the years - appearing largest in 2004 and significantly smaller in 2014.  In the 2014 photo the size of this feature was 35 m. x 17.7 m. 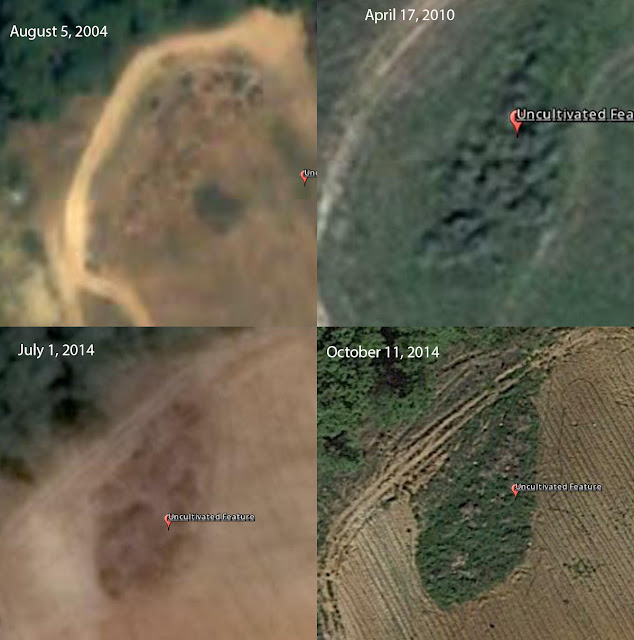 You'll notice that the paddle labelled 'Uncultivated Feature' moves around relative to the ground from image to image.  This happens because, over time, Google does not use the same model when fitting photos to an idealized underlying model of the earth.  For more on that issue see this.

That this tumulus may have been bull-dozed into a pile of rocks is, perhaps, reminiscent of the fate of the tholos of Mandhra in Messenia (C124) which appears to have met a similar end.


So it isn't just me.  The location of Wide's tumulus is really not now known with any precision.

[2] Middle Helladic.  In Privitera [2013] 156, "...un tumulo funerario risalente all'inizio del ME..."  And in Pelon [1976] 82, "La céramique, bien que d'un type particulier, permet de placer le tumulus à l'HM."  Simpson [1981] 51, "It is possible that some of these [finds from the tumulus, RHC] may belong to early Mycenaean times, since they are similar to tumuli excavated at Koukounara in Messenia (F 29).  There is, in any case, no doubt that Aphidna was an important Middle Helladic and Mycenaean settlement."

[5] Wide [1896] 388.  "Der Tumulus, der auf der deutschen Karte als 'Grab mit Mauereinfassung' bezeichnet wird, ..."  The map is Ernst Curtius & Johann August Kaupert, Karten von Attika, Berlin.  1885.  This very plate, xix, is reproduced here but not very readable although it is good enough to establish that the Lake of Marathon was nearly nonexistent a century and a half ago.