I am very happy to have been invited to give a talk in January to the Ancient MakerSpaces conference in San Francisco. This is a workshop session of the AIA-SCS (American Institute of Archaeology and the Society for Classical Studies) and it provides a forum for individuals or groups who have been pioneering digital applications in several fields of the humanities.[1]
My talk, devoted to the Mycenaean Atlas Project, is only ten minutes and so affords just about enough time to state the goals of the M.A.P. , show some representative slides, and talk about lessons learned. And yet I took this opportunity to write a longer report about the M.A.P. which explains some of my positions in more detail. Those who would like to learn more about this project than is available in a 10-minute talk can refer to this short paper.
The Mycenaean Atlas Project
A Table of Contents for the Greek Bronze Age
'He dreamed of Thebes and Camelot,
And Priam's neighbors.'
Robinson
The Mycenaean Atlas Project is a relational data base that is devoted to accurate locations for find sites of the Bronze Age in Greece. Currently it consists of 4400+ sites, 6400+ features, and nearly 4000 three-dimensional landscape models. More than six years of daily effort has gone into this project. Early on the decision was taken to make the database free and public and, to that end, the online site Helladic.info was created. This effort was undertaken because, to my knowledge, there was no previous effort to digitally map the entirety of the Mycenaean world.
There are now a number of digital products that try to map the worlds of ancient Greece and Rome in whole or in part.   Some of them are: 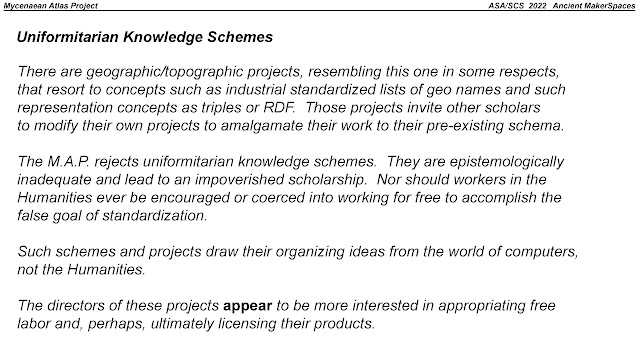 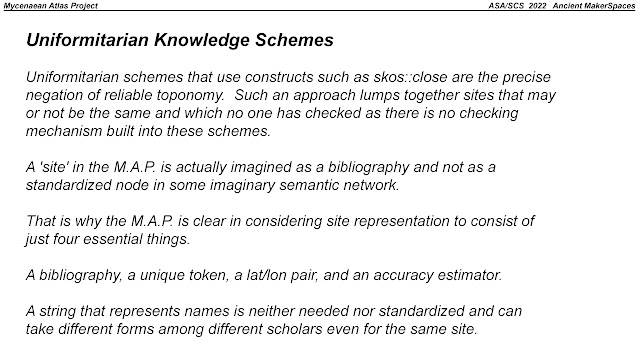 Thanks go to:
The primary contributor to the Mycenaean Atlas Project besides myself is Dr. Sarah Murray of the University of Toronto in Canada.    Several years ago I read her article (Murray [2014]) and learned that she had gathered a database of some 4000 LB and early IA sites.  She generously agreed to share this data with me.  From that data I culled about 2900 sites and from these was able to enrich those I already had as well as add about 1600 more that I did not yet have.
I have very generous friends and collaborators in Greece who have been kind enough to send me pictures and current observations  of several sites.  Among these I must mention 'Pete'  for working with me enthusiastically and selflessly for the last five years.  He has been instrumental in correcting errors and enhancing my understanding of a number of places in Messenia.  This product would be much poorer without his involvement.  Also Dr. Hajo Becker from Germany who has contributed photographs and whose numerous trips to Greece as well as thoughtful observations have helped me to precisely place several sites.
Dr. Michael Boyd (Oxford) kindly shared photographs and information about Kopanaki in Messenia.
Dr. Alex Knodell (Carleton College) worked with me on finding specific locations for many sites in Sterea Ellada.  I thank him warmly for affording me this opportunity.
Dr. Raphael Orgeolet (Aix-Marseille University) generously contributed location corrections for Kouophovouno (C988).
Dr. Dimitri Nakassis (University of Colorado at Boulder) contributed corrections for C6679, Chosti on Naxos.
Mr. Brady Kiessling of Topostext.org who encouraged me and who has provided invaluable information.
Many scholars have been kind enough to provide copies of their papers.  Among these is Dr. Rainer Felsch who  kindly provided his paper, ‘'Das Kastro Souvalas bei Kalapodi'’, which allowed me to correct the position of C6887 (when I had no other means of doing so).
I would be very remiss in not thanking Dr. Daniel Libatique and the professionals of the Ancient MakerSpaces organization who afforded me the opportunity to describe this project.
And, of course, special thanks to Michael P. Speidel, Professor Emeritus, University of Hawaii at Manoa who, all those years ago, set my feet on 'the right path.'
Any  errors that remain in these pages are mine. Any opinions that I state here or in the M.A.P. are also mine and mine alone and cannot be attributed to any of the people that I have named.
Footnotes
[1] The SCS website is here. The AIA website is here. The Ancient MakerSpaces page for the 2022 session in San Francisco is here.
Bibliography
Felsch, Rainer [2018]:  Felsch, Rainer , 'Das Kastro Souvalas bei Kalapodi' in Papakonstantinou et al. [2018] 73-82.  Online here.
Goodison and Guarita [2005]:  Goodison, Lucy and Carlos Guarita. ‘A New Catalogue of the Mesara-Type Tombs’,  Studi Micenei ed Egeo-Anatolici [47], pp. 171-212, 2005.  Online here.
Murray [2014]:  Murray, Sarah, "Qualitative Data, Hypothesis Testing and Archaeological Narratives: Was there ever a Greek Dark Age?" in C. Papadopoulos, E. Paliou, A. Chrysanthi, E. Kotoula, and A. Sarris (eds.) Archaeological Research in the Digital Age: Proceedings of the 1st Conference on Computer Applications and Quantitative Methods in Archaeology. Greek Chapter (CAA-GR), Rethymno, Crete, 6-8 March 2014. (IMS-FORTH): 64–69. Online here.
Papakonstantinou et al. [2018]:  Papakonstantinou, Maria-Foteni and Charalampos Kritzas, Ioannes P. Touratsoglou (editors). Πύρρα Melétes gia tin archaiología stin Kentrikí Elláda pros timín tis Fanourías Dakorónia. Athens, SEMA Ekdotike.
Wong [2020]:    Wong, Todd.  'GIS Summary of SNAP 2019 (Part 3): Analyzing Extracted Results', esri Canada, Centres of Excellence.  Published in 2020 in the  'McMaster Blog'.  This article (part 3) is online here. Part 1 is here. Part 2 is here. Part 4 is here.
Posted by Robert Consoli at 12:16 PM No comments: