In Messenia, near a town called Lambaina, there is a site that was identified by the MME researchers as a quarry/cem/habitation.  First let's look at it in the context of Messenia: 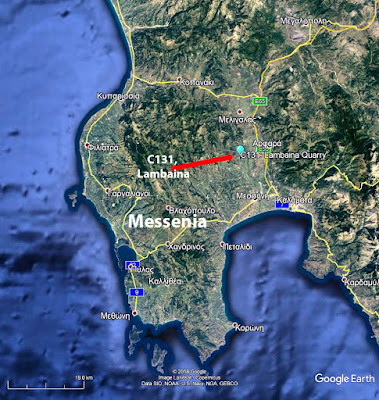 Lambaina sits on the W side of the Pamisos valley just before the Ithome foothills.

And here's a close-up of the Lambaina area: 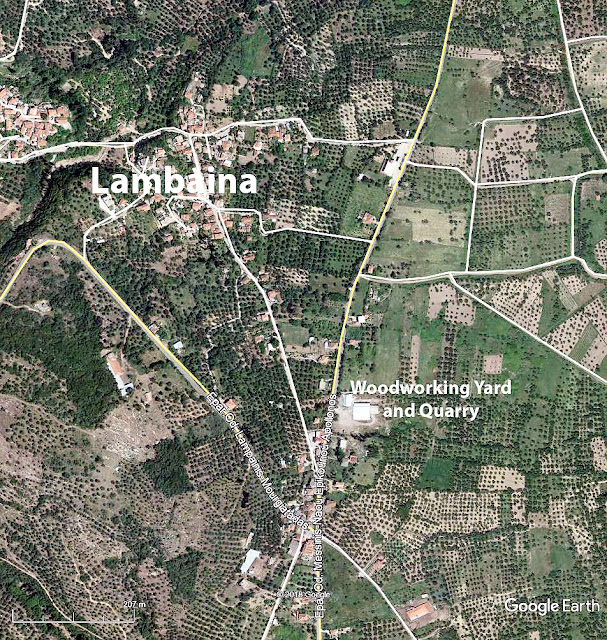 In this map N is to the top.  The main N-S highway runs through the center of the picture past a woodworking yard and former quarry.

The first description of this site known to me appeared in an article by McDonald and Simpson in 1964 where we read this:

“77B. Tourkokivouro (Lambaina)
On the E side of the Messini-Meligala highway and near the fork to Lambaina village (which is above and W of the highway) is a tile factory belonging to Ioannis Michalopoulos.  Immediately E of the factory is a great clay quarry which has cut into and perhaps largely destroyed a prehistoric cemetery.  The owner states that he retrieved from here and conveyed to the museum in Kalamata the two Mycenaean vases (a pilgrim flask and the bowl of a kylix) which are labeled as originating in Lambaina.”  [1]

In a follow-up article from 1969 McDonald and Simpson wrote this:

“77B. Tourkokivouro (Lambaina)
…
The ephorate investigated the site reported by us … Three pits were dug to rock on the E side of the clay pit and factory.  Pottery was more or less stratified in the sequence EH-LH-G.  The only structure encountered was an empty slab grave, probably EH.  The pottery was taken to the Kalamata Museum.  Mr. Papathanasopoulos suggests that this is a habitation site, rather than (as we thought) a cemetery.”  [2]

Finally, what does Simpson say in his gazetteer?

“F120  Lambaina: Tourkokivouro
(MME No. 122)
EH II   LH III(A2-B) G
...
About a kilometre east-southeast of Lambaina, on the east side of the Messini-Valyra road, stratified EH, Mycenaean, and Geometric layers were found on the east edge of a clay quarry. …”  [3]

Well, since the tile factory has disappeared the site is now effectively lost.  Can we find it?  What do we have to go on?


a. near the fork to Lambaina village.
b. E side of the main N-S highway in this area
c. about 1 km. E-SE of Lambaina
d. Tile factory 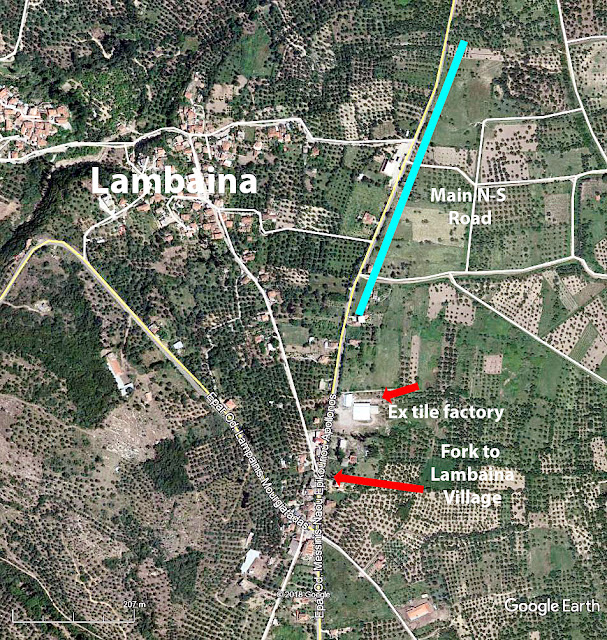 The tile factory.  Fortunately Google Street View exists for this part of Messenia so we are able to cruise up and down the main highway looking for it.  It doesn’t take long to establish that there is no longer a tile factory in this area.  What I discovered is a wood-working shop/factory with the name of ξυλεια Οικονομου or ‘Economy Wood Products’.

Now a correspondent of mine has visited this place and suggested a correction.  This is what he says:

“I have managed to pass the Lambaina quarry (or wood yard) several times and finally found the yard open with the owner in attendance. I asked him about the excavations and what he knew of it all.  He said he was rather younger when all this was going on and his father (not there) was the one who might remember more detail.  However he walked with me to the back of the yard where the quarry was originally located.  He confirmed that ceramics were made there before the yard became a saw mill.   It seems the ceramics were mostly tiles rather than pots or other utensils. That obviously made a quick survey rather difficult as the remains of the tile production had been dumped in the quarry when the yard was cleared for lumber storage.   In fact I picked up some of the more "interesting" ceramic pieces and wondered how anyone could tell by sight alone if they were ancient or modern.   The owner said there had been some excavations in the 80's but that they had not found too much and decided it was more likely a habitation of some sort - maybe even an ancient ceramic production centre using the same clay source.   His impression was that the excavators did not think it was a cemetery - certainly not one of any size.   However he was only a young interested person at the time and may have not understood all/any details.  He did say they became interested in something further to the east in another field (maybe the tumulus reported) but he didn't know anything about it.   I noticed a number of low mounds/small hillocks in the area to the east of the old quarry but did not investigate further at this time.

The upshot of all this is that your original presumptions are mostly correct (it was that yard and it had had a change of use from ceramics to wood).   However you might like to adjust the position of the site to something about 50m west of the current location (which is definitely outside the original quarry area).   My GoogleEarth  co-ordinates for the quarry area are:  37° 8.605'N ,  21° 58.284'E.

The quarry was mostly worked on the southern side into the low hill. Indeed there is a semicircular area a little further to the west that one might suppose was formed by excavation. Unfortunately after the official excavation the site was filled and the debris from the old ceramic shops was dumped in the area with little regard for ‘contamination’.”


My correspondent also sends along some pictures that he took there and which I reproduce here: 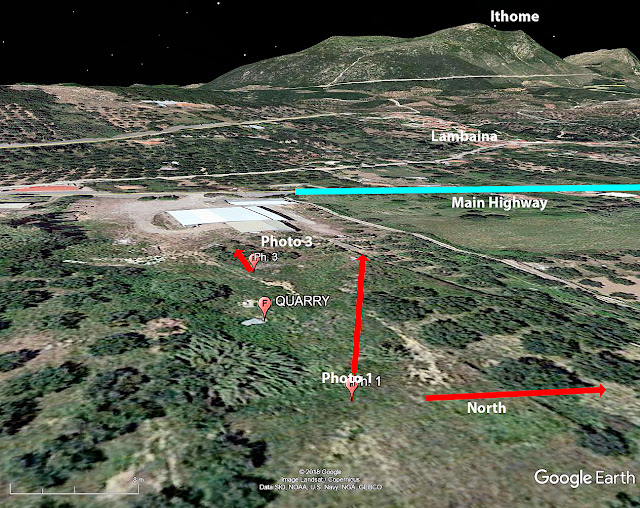 The next photo, Photo 1, is facing Mount Ithome and shows the clay pit/quarry to the left: 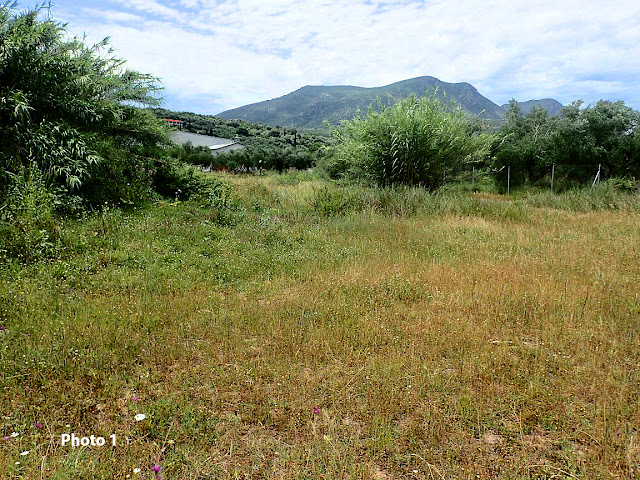 Photo 2 is a close-up shot of the overgrown quarry.

Next, photo 3 is a shot of one of the piles of rock debris that lie around the site.   Here we're facing W (towards Ithome, visible)  and the back of the workshop: 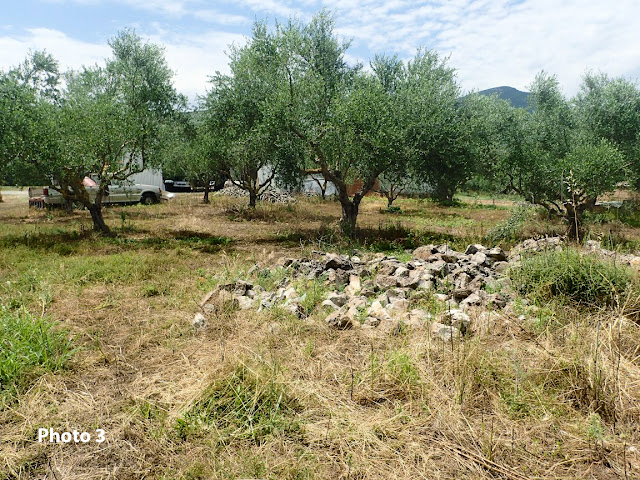 And, finally, we have a spectacular panorama of the entire quarry and back of the lot: 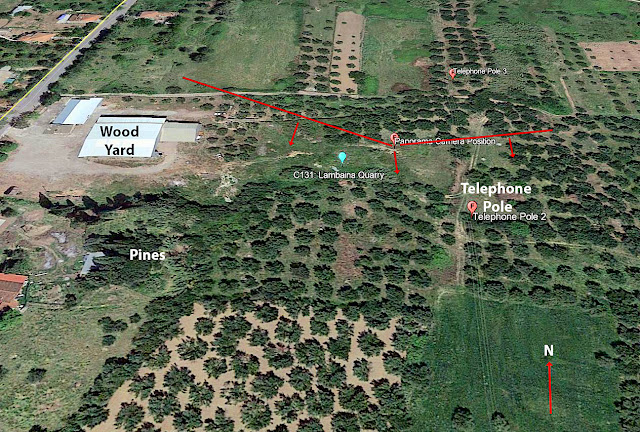 Posted by Robert Consoli at 1:11 PM