A minor (but frustrating) error in a Cretan gazetteer


“They said they were hair-dressers but … kind of hard to believe.”
Play It Again Sam
Woody Allen

I’m currently taking Mycenaean and Minoan sites from Crete and putting them into the Mycenaean Atlas Project database.  Today I was spotting sites in the very valuable gazetteer article:  Goodison and Guarita [2005].  Everything was going fine until I reached this:

“31. KHRONI KALYVI/ GANGALES
…
Location: After turning off the Ayii  Deka-Heraklion road towards Gangales,  140m on (just after the river) pass tiny chapel on left of road. 30m further on, cut across fields to the right (180m). The tomb is a few metres NW of a barn.” (1)

This tomb, possibly Early Minoan, is a circular tomb and mound of about 11 m. in diameter.  It was robbed in antiquity and, I suspect, of no really great importance or significance in itself beyond helping to fill out the picture of the extent of circular tombs in the Mesara during the EM.  Therefore the most important thing about it would be its exact position and that's what I want to establish.  There are a number of ambiguities in the directions to this tomb so I decided to take this down to the ground and provide a full description of what our authors are trying to tell us.

The main north-south road through the center of Crete runs from Heraklion to a junction with a major east-west road and very near to the town of Aghii Deka. (just a few km. further on one comes to Gortyn.)   And what our authors are saying is that if one turns towards Gangales (away from Ayii Deka to the east) then, after 140 m. one comes to a small chapel and then a road to the right which will lead to this tomb.

I tried every possible way to move 140 m. to the E from the N-S road to the main E-W road but nothing worked.  Actually 140 m. hardly gets you out of Ayii Deka.  There is a river in Ayii Deka and everything almost fit but didn’t quite.  Especially vexing was my inability to spot any tiny chapel on the edge of Ayii Deka.

I spent a couple of hours on this and finally I just tried a guess.  Perhaps 140 was a mistype for 1400 (or something).  I started again tracing a 1400 m. route from the easiest turn-off from the N-S road to the east (another guess).  At the end of the 1400 m. trace I discovered everything together, the river, the chapel, the barn … everything.   And the ‘tiny chapel’ really was very tiny indeed; in Greece such a thing is known as a kandylakia – a roadside shrine/contribution box shaped like a full-size church.  And standing next to it was another even smaller and even more elaborate kandylakia.   The people of Greece sometimes erect these kandylakia at a place where a traffic death has occurred.  They form a kind of small refuge where a person might stop and pray during the day or light a candle or give a donation.

I don’t know what these kandylakia are called in Crete but ours look like this:


What about the route itself?

This photo shows the route that you're driving on in light brown.  The river that you pass is in blue and the arrow A marks the position of the 'tiny chapel' and the kandylakia.  The line in purple is the 180 m. path that you take 'to the right'. 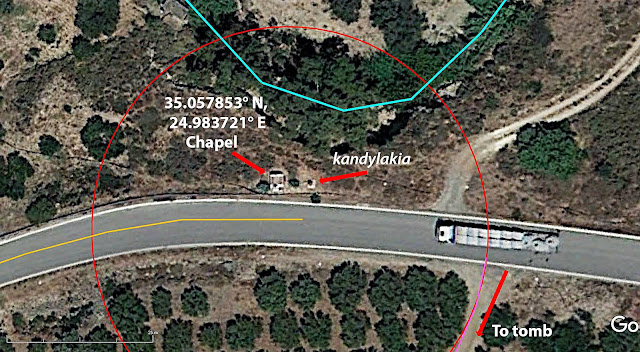 Here is a close-up of the east end of the route.  The blue line is the river that Goodison et al. call out.  The lat/lon pair is the position of the 'tiny' chapel.  The circle is centered by the kandylakia and is 30 m. in radius.  Not surprisingly that brings us directly to the road 'on the right' which leads south 180 m. to the tomb.  Our authors say: 'Present structure: Barely discernible raised irregular circular mound of stones, overgrown by vegetation.   D: ?c. 11 m.  ...' (2)

Goodison et al. would have done their research before 2005.  I was able to find the 11/16/03 image of this area in Google Earth.  It does appear to show an anomaly about 7.5 m. to the NW of the NW corner of the barn.  No other image that I examined shows anything at all in that position.  I have drawn a circle of 11.0 meters in diameter centered on that spot to suggest where the tomb may have been.  I emphasize that this is supposition based on what our authors have told us.


No one claims that their work is error-free.  Substituting 140 for 1400 is a tiny error in a really fine and useful article.   In the field of computer science this would be labelled as just a bug.  I shudder to think how many of these things there must be in my own work.  It does illustrate, however, one of the real advantages that digital representation has over traditional print venues for scholarly work.  This article is going to be around for a long time and the description for Tomb no. 31 will be misleading people for as long as it exists.   If the information in Goodison et al. [2005]  (and several hundred others that I could name) were in the form of a database then such a flaw could be repaired for free and turned around in seconds.  It's just like software in that respect.  No professional expects software to be completely free of errors.  No moral opprobrium attaches to this.  Software authors recognize better than most other professionals that, when it comes to details, the human mind is basically trash.  As a result a large part of software implementation consists of making provision for keeping flaws under control.

One of those devices is the version numbering system.  As hideous as it may sound to an academic it may be time to start versioning articles and books.  The versioning information goes along with the article/book and would explain what has changed since the last version and why.  Of course this can only happen if these articles/books are online.   A consummation devoutly to be wished.

Of course I also think that articles and books shouldn't be printed at all.  It's outmoded.  Why commit errors to epistemological prison?

Finally, let me express my gratitude to Goodison and Guarita for providing this gazetteer from which I've learned so much.

A new database for the Mycenaean Atlas Project (www.helladic.info) was delivered on May 11, 2018.  Approximately 35 new sites were added in the Siteia region of Crete.  The new DB is rev 0059.

Also don't miss my review of Against the Grain by James C. Scott.  It's here: http://mycenaeanatlasproject.blogspot.com/2018/02/some-notes-on-james-c-scott-against.html
If you like these posts then please follow me on Twitter or Google Plus (Robert Consoli).
You can e-mail me (and I hope you will) at  bobconsoli   at   gmail.com
And please remember - Friends don't let friends use Facebook.


If you'd like to have a copy of the Mycenaean Atlas database then e-mail me and tell me about your project.  And remember that useful .kml and/or .csv files can be generated directly from all the windows of the website helladic.info   Try it out!
Notes

Posted by Robert Consoli at 8:43 AM