The first thing that must be clearly understood is that Pelagios Commons/Peripleo creates no scholarly content and has nothing whatsoever to do with any Classical scholarship.  It is strictly a computer science construct and, with a different database, would be perfectly at home in the world of migration tracking, chemical research, or anything else.

Peripleo is simply a front-end site or data aggregator of a very common type.

Pelagios Commons links large amounts of data produced by other non-related sites and entities and subsumes them under a common format.  It then exploits this umbrella format in order to write its own front-end viewing tools (Peripleo).

Its business model is exactly like that of Huffington Post and any one of hundreds of similar sites.  Through an agreement with providers it reproduces their work tout court.  They say that these unpaid contributors are members of a ‘Community’ but this ‘Community’ is nothing more than the stable of content providers who give away to Pelagios the fruits of their labors.  The most amusing statement on the Pelagios website strenuously denies this plainly obvious fact:

“It is important to note from the outset, therefore, that Pelagios is not a data aggregator or a search portal…”

Pelagios forces their providers to reduce their own work into a Pelagios format in order for Pelagios' software to display it.

What else can Pelagios/Peripleo be but an aggregator/search portal?  In fact, if you go to their Peripleo splash page they clearly say 'Peripleo is a search engine ...'.  The fact that their content providers cooperate in the theft of their own labors does not change the essential nature of the arrangement (This was true for Huffington Post which disguised its essential nature until the moment it went public).  The content providers are said by Pelagios to be members of a ‘Community’.  From my many years as a professional computer scientist I can assure my readers that this type of dishonest rebranding is quite common everywhere in the online world.  The first step in any internet grift is to give it a name that expresses the opposite of what it really is.

That it is the contributors who are to do all the work is also obvious from the tools that Pelagios Commons provides:

Recogito   This is an ‘online platform for collaborative document annotation’.  But it is not the staff of Pelagios Commons that’s going to do this annotation (how could they?).  It is the contributor, the member of the ‘Community’ who creates this content.

Their Cookbook  makes it easy to see who it is who does all the work for Pelagios (hint: not the Pelagios staff themselves).  In every case the contributors are responsible for massaging all their data into a form that Pelagios can accept.   This is a cost to the contributor of many hours of uncompensated labor.  Pelagios should disguise this aspect better than they do.

The following picture should make these several relationships clearer. 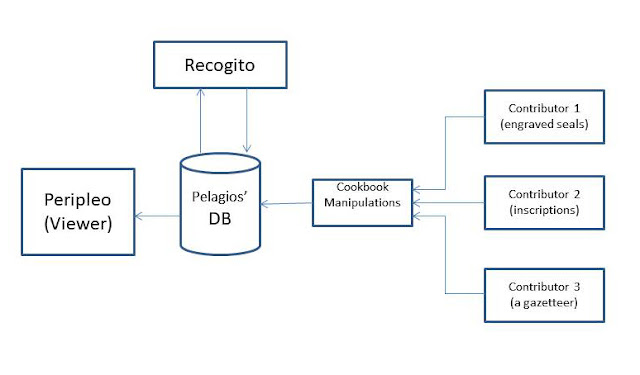 Casting doubt on the Pelagios enterprise is not to deny that some sort of digital structuring of the data that we have from Mediterranean societies of antiquity would be useful.  It would be useful.  But how is that goal to be attained?

The data that comes to us (or generated by us) relative to antiquity is of the most heterogeneous forms.  Locations, building plans, daily customs, food stuffs and their hypothesized yields, customs, clothing, trade, etc.  Everything of human interest falls within the purview of scholars of antiquity.  This is a classic data fusion problem.  Data fusion problems arise in environments where a number of sensors of different types provide data of interest that is to be presented in a uniform view.  Such problems arise in the cockpits of fighter pilots and in very many environmental studies where, again, different sensors (or the same types of sensors with different capabilities) are used to gather data which is then to be united, combined or fused into a single point of view.

Pelagios Commons dimly recognizes that this is the real problem.  But they have performed this task backwards.  They start from the assumption that Linked Data is the solution to everything.  Upon that ideology  they built a product which is useful for no one.  That’s the essential problem.  The site really isn’t good for anything because it started ideologically.   It did not start by asking what it is that scholars of ancient societies really need in the form of digital support.

How should the social data from ancient Mediterranean societies be fused?  But, before that, what does it mean, from the digital point of view, to support such scholars?  Particularly in view of the fact that the scholars in such fields have radically differing interests.