Where is the church of Ayios Konstantinos (Arcadia) C1716?

In his important survey of Eastern Arcadia Howell says this about the church of Ayios Konstandinos at Stadio in Arcadia:

“24. Stadhion (Akhourion) – Ayios Konstandinos (plate 38c).
The church of Ayios Konstandinos stands on a low mound at the northern edge of the village of Stadhion.  It lies about 200 m. from the crossroads at the centre of the village, to the right of a road leading north towards Ayios Sostis.  Early Helladic … and Middle Helladic sherds … occurred in abundance over an area about 100 m. in diameter around the church.  Five obsidian fragments were also found …”[1]

And there’s more to this site than just some sherds.  The BCH, number 2423 announces, in 2007, the discovery of a habitation there.  They say this:

“Tegea, Stadium.  Hill of Agios Konstantinos.  The ΛΘ’ ΕΠΚΑ reports the discovery of a settlement (fig. 1) occupied principally in the Early and Middle Helladic periods but continuing into Late Helladic. A rectangular building with two rooms (one over 25m2) has so far been partially excavated. The pottery recovered includes an undecorated EH bowl and sherds of at least two storage pithoi with rope decoration.”[2]

Going to the link which BCH provides gives us a nice .pdf which goes into more detail about the find:

“Stadio, Agios Konstantinos Hill
Just outside Stadio stands a low hill that has been named after the homonymous newer church on its top. Older surface surveys on the hill resulted in the identification of prehistoric pottery. The excavation research of the Ephorate that began in 2007 on the occasion of the request of the ecclesiastical council for the construction of a multipurpose building, a short distance southeast of the church, brought to light for the first time a prehistoric settlement with continuous habitation from the Early Helladic period to the late Mycenaean (Fig. 2). The main phase of use of the site dates back to the Early Helladic and Middle Helladic period. At present, a partially rectangular building with a DDB-ANA orientation has been excavated, which has a bilateral arrangement and is similar to the most widespread type of residence in the Aegean area since the early Bronze Age. One of the two rooms has an interior space of over 25 m². Among the most characteristic ceramic samples are an intact first-generation flask and fragments of at least two strands with rope-like decoration.”[3]

So.  In Howell’s time when it was merely a sherd scatter it has now become a full-fledged habitation; even an important one.  So where is it?  Ah.  That’s the problem.  Let’s go to the map. 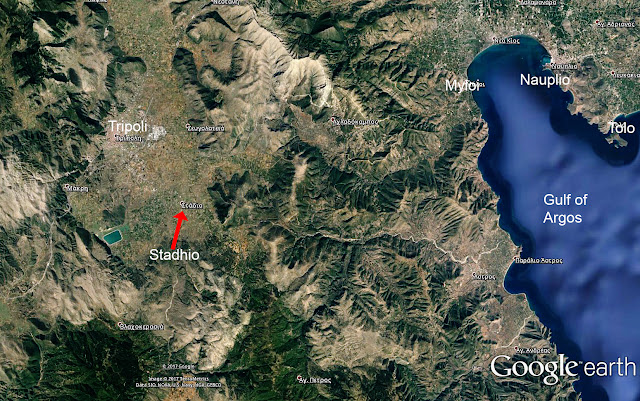 In this first satellite view we see the general area in Arcadia where Stadio is located.   I have marked some other well-known spots such as Nauplio, etc.  Stadio is just a few hundred yards to the east of Tegea. 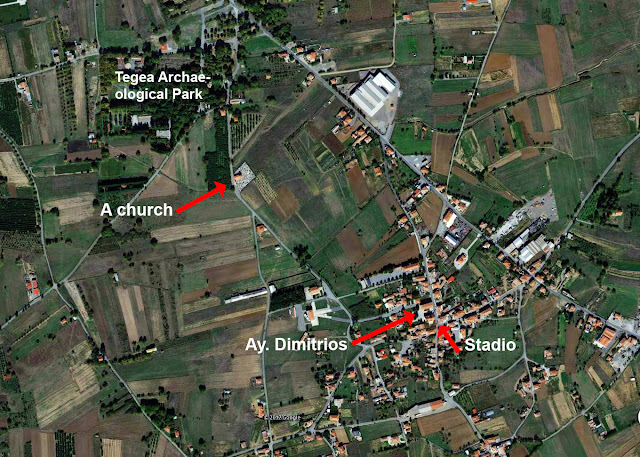 In this second satellite view I show the area in a close-up.  Stadio is to the lower right center.  The red arrow by ‘Stadio’ points to the crossroads mentioned by Howell.  The large church in the center of Stadio is Ayios Dimitrios.  It is not the church that Howell et al. are talking about.

Leading from Stadio to Ayios Sostis to the north the road passes just to the east of Tegea Archaeological Park.  On the way it passes a church which is on the right.  It’s the identification of that church which is in question.  Here’s another closeup: 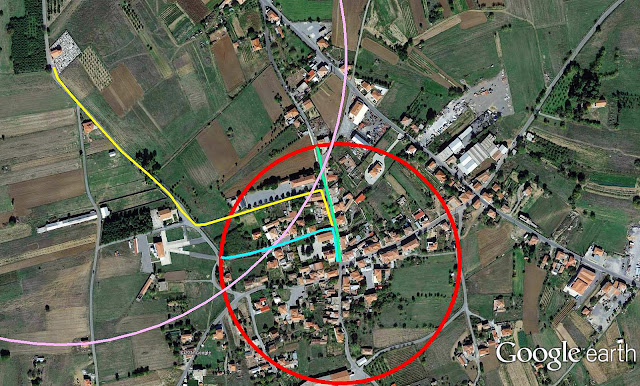 Let’s unpack this picture.  The red circle at the lower R is centered at the crossroads of Stadio.  It is 200 m. in radius.  Theoretically the church of Ayios Konstantinos should be on or near the northern edge of that circle.  There is no church in that area.  Our candidate church which we identified in the last picture (and whose name I do not know) is nearly 500 meters from the northern edge of Stadion.  That’s the lavender circle.  It is centered on the possible church and has a radius of 484 m.  I drew several routes starting from the main crossroads in Stadion.  The blue route goes to the edge of the 200 m. circle to the west.  No churches there.  The yellow route shows the main way to Ayios Sostis.  It does go past our candidate church.  The church is on the right of that route which it should be (Howell is thinking of the route as running from Stadio to Ayios Sostis).  But that yellow route is nearly 700 m. long.  The green route just starts at the crossroads and runs almost exactly 200 m. to the 200 m. radius circle edge.  No church at the end of the green route either.  So is the church at the end of the yellow route our sought-after church?  Even though it’s much further away from Stadio than 200 m.?

Regrettably I do not know the answer.

I suspect that at one time (it’s been nearly 50 years since Howell wrote his description) the church of Ayios Konstantinos was located somewhere else.  The Greek people do move and rebuild their churches from time to time so this is not impossible.  There could be a clue in the EPKA announcement where they say: ‘stands a low hill that has been named after the homonymous newer church on its top’.  (‘…τον ομώνυμο νεότερο ναό στην κορυφή του.).  ‘Neotero’.  This is the comparative form and just means ‘younger’ or ‘newer’.   Although I think that the Greek is mushy at this point they appear to be trying to tell us that this church of Ayios Konstantinos is ‘newer’; perhaps has been rebuilt.  Our candidate church does stand on a barely perceptible hill.  It peaks at the cemetery about 3 m. above the level.  If this is correct then EPKA’s announcement does refer to our church (F2689) at 37.462022 N, 22.430321 E.

But if this is Howell's church then that raises additional  difficulties.

Case 1. It was originally located somewhere nearer Stadio.  That means that the finds of Howell cannot be associated to the EPKA finds even though EPKA clearly says ‘Older surface surveys on the hill resulted in the identification of prehistoric pottery’.

Case 2. It was never rebuilt and is still in the same place or it was rebuilt in the same place.  If EPKA is telling us that Howell’s finds and the finds announced in 2007 are from the same place then we still have the problem that this putative Ayios Konstantinos does not at all conform to Howell’s directions.

I trust that I’ve muddied the waters sufficiently for today.

For the purposes of my atlas I’m placing C1716 (Stadhion: Ayios Konstandinos) at this new church.  But the difficulties are obvious.  If anyone knows exactly where the church of Ayios Konstandinos near Stadio is, or was, or what in the heck EPKA is on about then please let me know.

Status of the Mycenaean Atlas Project

Currently prototyping an alpha online version of the Atlas.  I'm probably about a month away from making it available.

I've recently received a large database of Bronze Age and Iron Age sites in continental Greece and the islands.  I estimate that it will add 1200+ more unique sites in addition to additional information about the sites that I already have.

Anyone who would like to have a copy of the MAP database can send an e-mail to bobconsoli 'at' gmail.com or leave a comment on any of my posts.

A large (about 2400+ page) .pdf document which describes the entire database is available for the asking.

To run the MAP database requires a SQL server running on your desktop computer.   MySQL is such a server and it is powerful, industry-standard, and free.

I can and will make .kml or .kmz files, which can be opened directly in Google Earth, available to those who would like them.
I can also create .csv files for people who would like to import Mycenaean Atlas Project data into Google Earth but would like it in tabular form.
If you like these posts then please follow me on Twitter (Squinchpix) or on Google+   (Robert Consoli)