Where broken links come from: the case of Peripleo

In my last post I suggested that rewrite rules were intended to make it easier for a user to search for an item on a web site.  The general concept looks like this: 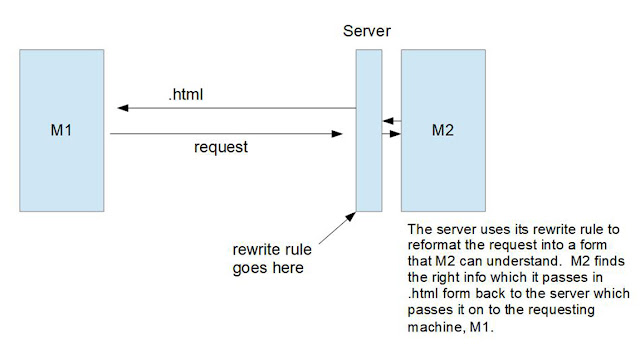 Now, given this set-up we can change this (hypothetical) complex link:
{a} https://www.pleiades.org/stoa/locator-page-constructor?place=579885
the user would just type this on the URL line:
{b}  pleiades.stoa.org/places/579885
Of course that's not really true is it?  Just one difficulty: how would the user know the specific key (579885) for Athens?
Rewrite rules are really intended for the convenience of the server-side developer.  In this case I'm talking about Pleiades but, in fact, there are probably millions of web sites (no exaggeration) which make use of rewrite rules for their own convenience.  For example, what  if I were to take my path:
{c}  https://www.helladic.info/MAPC/pkey_report_wparam.php?place=C4880
and change the program name to, oh, I don't know, let's say this:
{d}  https://www.helladic.info/MAPC/DEV/Places/key_param.php?place=C4880
In this case my original rewrite rule would still work.  The outer appearance of my site would not have changed.  If I made more radical changes it would still be o.k. as long as I came up with a new re-write rule.  This new rule should preserve my site's surface appearance to the outside world so that people invoking my site would not have to change their software or database or calling routines or all three.  So the purpose of a rewrite rule is to decouple my site's internal workings from the appearance which it presents to the outside world.
A failure to keep internal reality and outside appearance in synch is illustrated by the failure of all the links to the British Museum on Pleiades' Peripleo project.  When I search for 'kylix' for example I get this display: 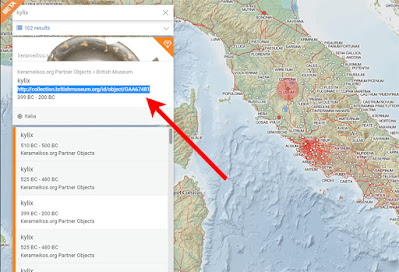 The link to the British Museum (red arrow) does not resolve.  When I try it Chrome gives me this message:

"This site can’t be reached"

Now, to be fair, the  problem appears to be on the British Museum's side.  They have changed something in the path to their pictures but have not created a rewrite rule to preserve the previous appearance nor have they let Pleiades know about it.  Because this has never worked in the eight months that I've been trying it I find it curious, although not surprising, that Pleiades/Peripleo doesn't care enough to try to fix it.
After all, in the article I quoted from last time, Tom Elliott has this to say about URL/URIs:
"They’re cool because, if you construct them sensibly and connect them to interesting information and take care of them so they don’t rot into uselessness, they make citation happen." [1]
(emphasis mine)
Next time I want to address the idea of what it means to use digital resources for citation.
Notes
Biblio
Elliott [2018]:  Elliott, Tom, 'The Pleiadic Gaze: Looking at Archaeology from the Perspective of a Digital Gazetteer',  Archaeology and Economy in the Ancient World; Classical Archaeology in the Digital Age – The AIAC Presidential Panel 12.1 (51), 43-51.  Kristian Göransson ed., 2018.  Online here.
Posted by Robert Consoli at 8:48 AM