Do Not Use the Pleiades Data Set

The river Quartaccio is a brook (described as 'fossa') just near Marina di San Nicola on the Lazio coast of Italy. This brook diverges from the Statua (another brook) at 41.9298 N, 12.135 E and flows N towards the town of Quartaccio and Valcanneto. Along this brook at about 41.9356 N, 12.1381 E a modern road crosses it. This is approximately the position of a Roman bridge which is given no name. This bridge is marked at this place in the Barrington Atlas (Map 43, A2, no. 2).   Here's what it looks like in Google Earth: 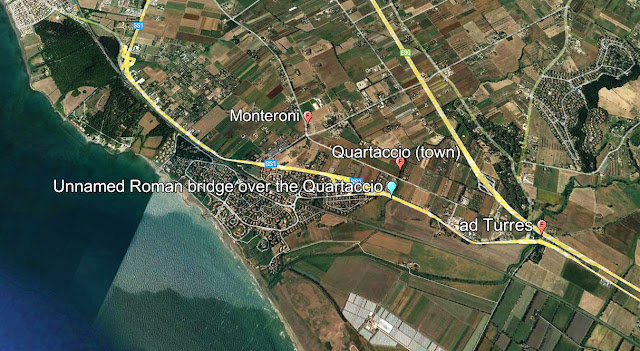 All in all it took me about half an hour to trace down the right Quartaccio (there are several) and take a stab at the position of the bridge based on the Barrington Atlas. 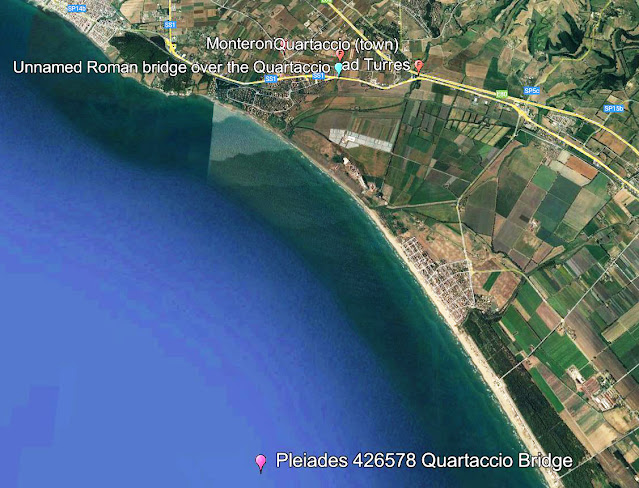 Now these gross errors of placement in the Pleiades data are nothing new. I looked at five examples last time and I attributed them to careless digitization and the complete lack of any quality control.   I did notice that Pleiades puts their accuracy estimate for the Quartaccio Bridge as 'Rough'. I thought, 'Aha!',  if I can see what 'Rough' means to the Pleiades group then maybe I can see  how far the  problem goes.   I got the 'Rough' points out of the database that I made from Pleiades' data and plotted that on Google Earth. There are about 5000 points labelled 'Rough' in the Pleiades DB. I used a select to retrieve the first 3000 of these (about 1/10 of the entire Pleiades DB). Here's the result of plotting these 3000: 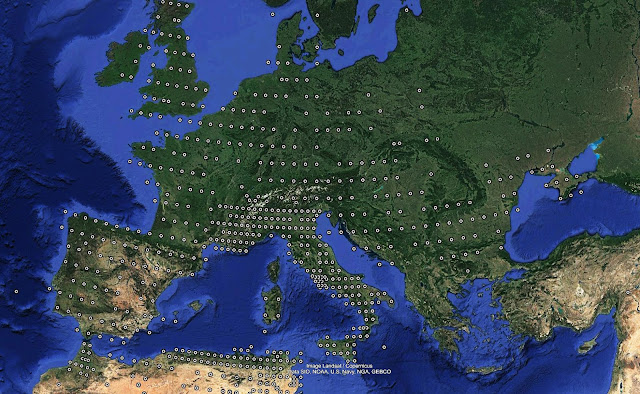 Even if the location of these sites was not known (most of them are known as I will show) Pleiades has made no effort to place them even approximately.  These points are simply dumped off at the nearest half-degree or quarter-degree vertex.  Nothing else could make such a pattern.

And most of these points are not singles.  They are multiples of 5 to 10 distinct locations which are simply dumped on top of each other. All these sites have simply been rounded to the nearest degree or half-degree. And most of these points are easily locatable. When I was criticizing P. for errors I truly believed that the number was, perhaps, about 100 points. Now I see that it is thousands of points that could be known but which are simply dumped off at the nearest vertex. 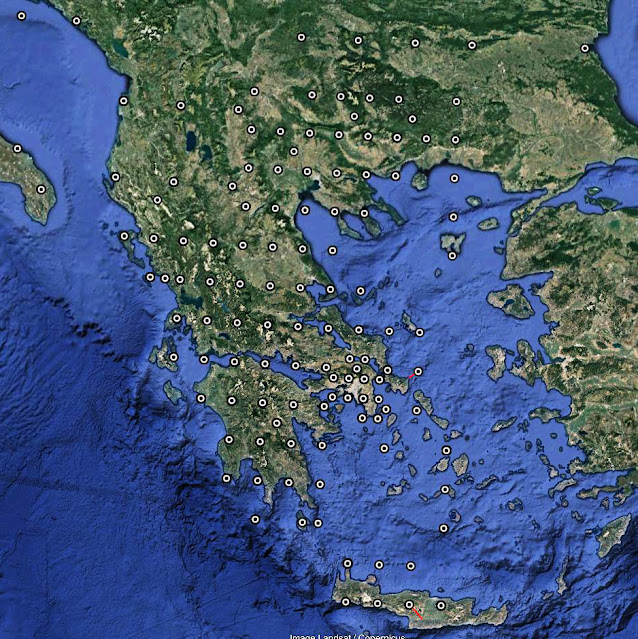 I've said that many of these points are just carelessly dumped in a pile even though the locations they denote are easily locatable.  Here's an example.  In the Corinthian Gulf Pleiades has overlain six points at 38.25 N, 22.25 E. 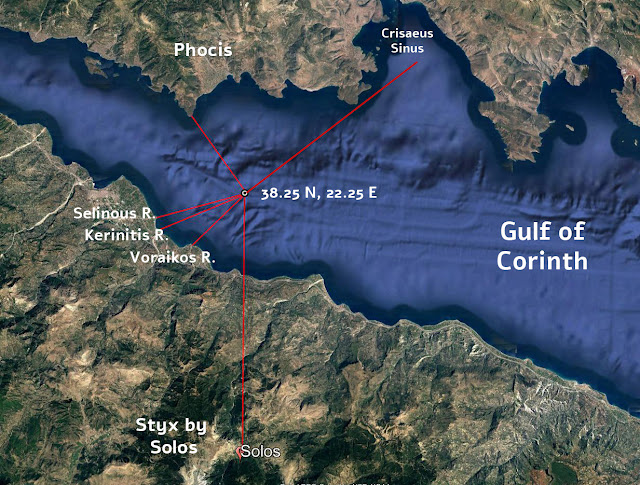 I've drawn red lines from the vertex where they were dumped to their real locations.  The line drawn to Phocis is drawn to the nearest point of land in Phocis.  The lines from the  rivers are drawn from the mouths of the respective rivers.  The Styx is the modern Mavronero above Solos.  The village of Solos is marked.  Every point was easily locatable and the average error is 13.9 km.
In Pleiades-world four rivers, an entire province, and a gulf are all in exactly the same location.   All of their 'rough' points are exactly the same.

I can think of no toponymical practice that can explain this pattern.  What's absolutely clear is that the Pleiades data set has no conceivable use for any scholarly purpose.

The Pleiades data set is approaching twenty years of existence.  In that time the P. team had plenty of time to fix these gross errors.  I concluded long ago that Pleiades never had any interest in creating a scholarly (or even a reliable) map of the ancient world.  Soon I will dedicate one of these posts to discussing what I think their real interest is.

The Pleiades data is unsuitable as a reference.

It is unsuitable for study of the Ancient World.

It is unusable as a basis for developing further geographic tools.

Pleiades owes the scholarly community an explanation of why their data so bad and what they intend to do to rectify this very poor database.