The general area in S. Crete looks like this: 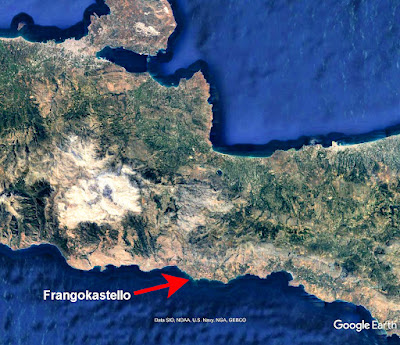 Near this castle there was, in Roman times, a (port?) town called Ayios Eustratios.  The ruins of that  town can still be seen although these days it is nothing but a series of collapsed walls, completely abandoned except for someone who seems to have hacked out a farm there.

The question comes down to where is Ayios Eustratios exactly; Pleiades' position is catastrophically wrong as usual.  How do we find it?

The best description of Ayios Eustratios that I can find is in Hood who says:
"Extensive Roman settlement in the middle of the plain about 1,500 metres north-west of Frangokastelli and less than a kilometre from the sea."[1]
He provides a sketch map although it is useless.  Here it is: 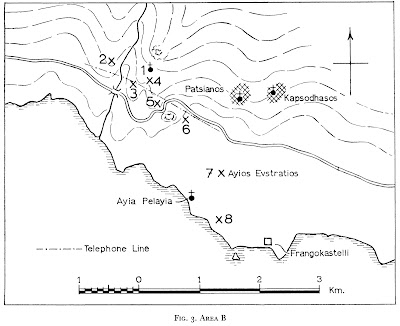 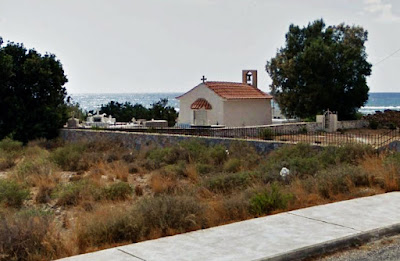 The difficulty with Hood's map is that it places the ruins of Ayios Eustratios on the same side of the coastal road as Ayia Pelayia and, from Hood's verbal description, this is not possible.  In addition the coastal road is shown on the map much further inland than it is in reality.
Hood wants these ruins to be 1500 m. from Fragokastello and 'less than' one km. from the coast.  Perhaps we can bound the area of uncertainty by using these constraints.  The next picture shows a white bounding box which covers the area 1500 m. from Fragokastello Castle  (red circle) and a kilometer from the coastline (the yellow line): 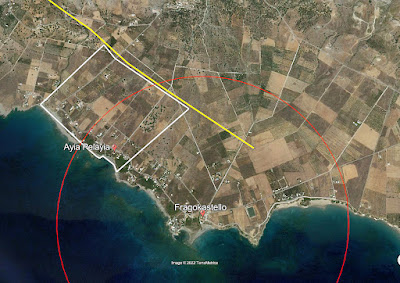 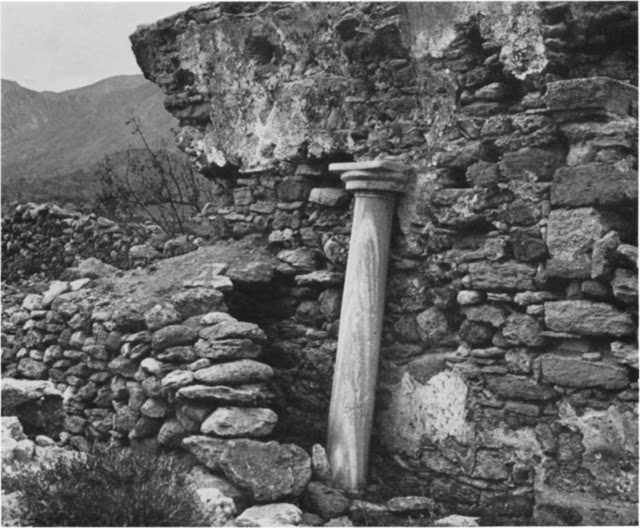 This is a column from the apse of the church of Ayios Eustratios.  The only clue which this picture affords is a snippet of ridge-line behind the church on the left.  If it were possible to locate this ridge line it would be possible, just, to draw a back azimuth that might cross our town.  Is that possible?  First I wanted more detail in the ridge-line. 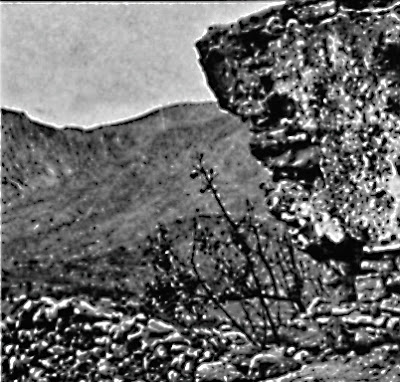 Well, this looks  pretty bad.  It's not going into our collection of vacation snapshots.  But that's not the point.  I ran this through an HDR processor from NIK software and crunched it to the maximum.  Now it's quite possible to make out more detail in our ridge-line.  However, we still haven't found the snippet of ridge that this shows.
I went back into Google Earth and tried to locate this ridge.  Here it is from Google's ground view: If you compare the enhanced photo with the ridge shown in the white box you'll see the same section of ridge-line.  Just to be more certain I looked at the same ridge from Google's Street View: I enhanced the ridge snippet from the Google Street Drive photo and got this:

On the left is Hood's picture and on the right is the enhanced section of ridge from Google's Street View.  I think that this is it.  Now if we can draw a line from that ridge point and at right angles to it, through the bounding box we might better be able to locate our ruins.  Here it is: 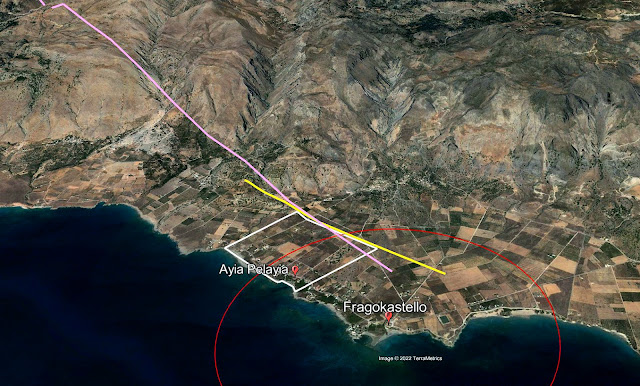 In this picture the purple line is drawn from the top of the ridge in the photo at what, frankly, is a guessed angle through the bounding box.  The red circle is radius 1500 m. from Fragokastello Castle.  And the yellow line is about 1 km. from the coast.  All the constraints are met so somewhere, at the NE side?, of the white bounding box we should be able to find the town of Ayios Eustratios. 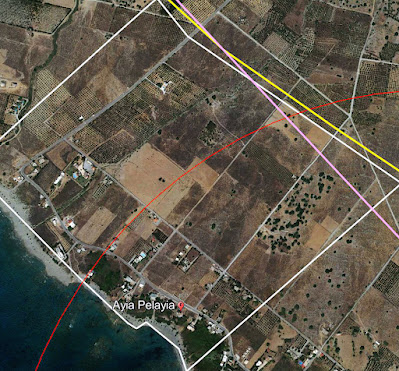 Here it is in close-up; what's that semi-wooded area at the right corner? 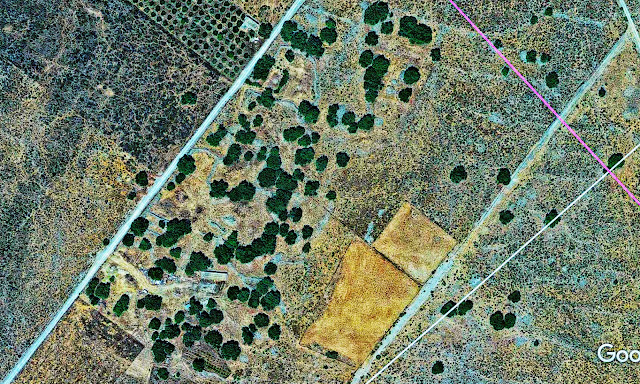 This looks like our town.  Hood says:
"The site is strewn with abundant stones from buildings, and the ruins of an early Christian basilica church are visible."
I ran this picture through every algorithm I could think of in order to bring out the ruined walls and here they are, unmistakably.   The former walls have the curious 'smeared' appearance of walls that have sat undisturbed for a couple of thousand years.  I am convinced that this is the right place.
Can we now find the church of Ayios Eustratios?

I think that this shows it.  The structure pointed to by the arrow is a little longer than Hood says, about 18  m. vs. his 15.  But the width is right.  I make it to be just a hair more than Hood's 12 meters.
The real scandal here is how consistently bad Pleiades' data is.  Here's a map which compares my position to theirs.  The length of the red line that joins the two positions is 2122 m. long.  So Pleiades is more than two km. out.  Tell me again why Pleiades' data is used by scholars? 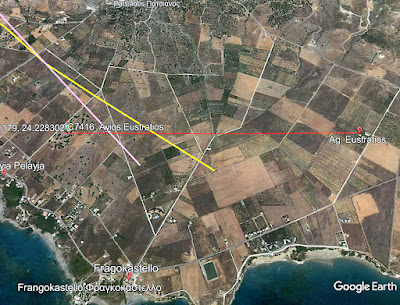