Some preliminary thoughts and readings:

Without using the Mycenaean Atlas specifically see if you can find 'Romiri'.

The answer is here.  No peeking.

I myself cannot find the spring 'Kephalovrisi'.  Can you?

McDonald and Simpson [1964] 233 say that from the site to the Chapel of Analipsis is 186 degrees; to the mountain of Chandrinou (Hagios Elias) is 267 degrees; and from the site to the center of Mesopotamos village is 338 degrees.  So the back azimuth from these three sites is 6, 87, and 158 degrees respectively.

Obsolete names become embedded in the archaeological literature as here in Romiri (many abandoned towns), on Antiparos (Krassades: C7134), and elsewhere (Elis).  This is a powerful incentive to map as many of these sites as possible so that the knowledge is not lost and does not become an esoterica. 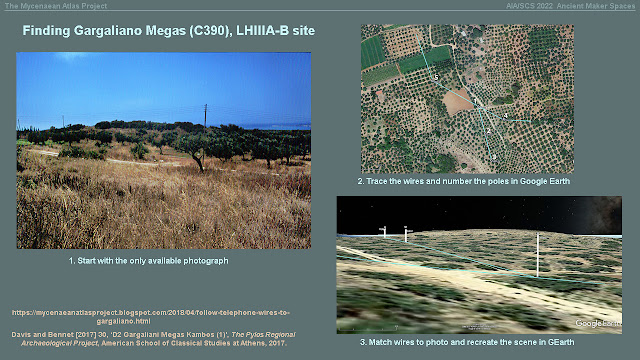 - Here is an example of one way to locate a site.   The  site of Gargaliano Megas (C390) is described in Davis and Bennet's Pylos Regional Archaeological Project.  The landscape is gently rolling low hills covered with brush and monocrop olive culture.  It is difficult to find by just using a map.  The one photograph shows poles with electrical wires.  It was possible in this instance to start by tracing the visible wire network in Google Earth and then matching that network's likely locations to the photograph.  Once that was done it was possible to re-create the original photograph in Google Earth and confirm the actual site location (top of the hill in the middle distance).   More than that it was possible to locate the position and the angle from which the photograph was taken.  Recreation of photos in Google Earth is a powerful technique. 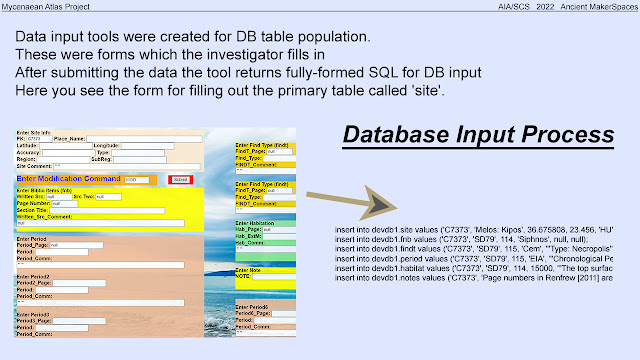 Many tools and utilities can be written to make the creation of such a database simpler.  Putting 4000+ records into a database is no trivial task for a team member.  This process can be shortened and made reliable by creating DB input forms.  Here's an example of one of those forms which fills in the main table.  On the left is the form itself and on the right is the resulting MySQL code which goes to the DB.  Using such forms reduces errors and saves time.   It just looks like a form.  When it's filled in the submit button sends the input to a PHP program that generates the corresponding MySQL statements.  It's often worth the cost to write database input tools.

What sorts of numbers are required for accurate site location? 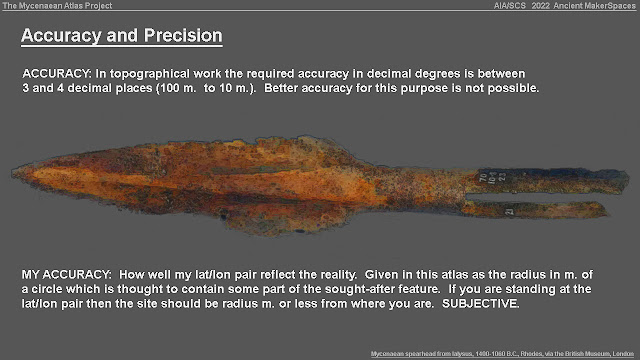 A primary goal of the DB was accuracy of location.  Analytical tools will only work properly when the input data is accurate and I made a commitment to expend every effort to achieve that goal.  Of course many of these sites are not clearly locatable.  The control page allows you to survey various levels of accuracy.

What about the Bronze Age Collapse? 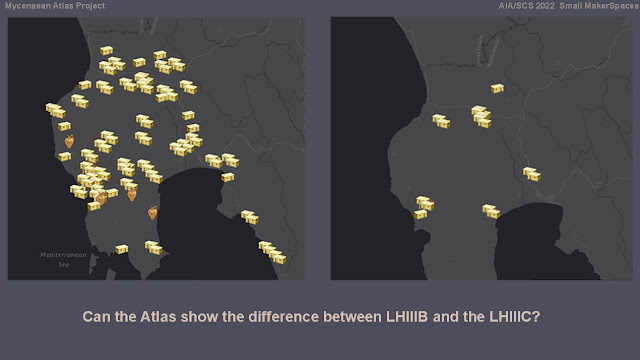 The M.A.P. wasn't created in order to support any particular theory.  Nonetheless it's remarkable that it appears to show signs of something catastrophic occurring at the end of the LHIIIB.   Here are two images; the left shows what a search for 'Settlement' looks like in Messenia for the LHIIIB.  The right-hand slide shows the same thing during the LHIIIC.

You can generate .kml or .csv files of such searches

- What Effect, if any, does such an Atlas have on Site Security?  Should the M.A.P. be taken down?  Discuss.

We need an up-to-date map of the finds around Koukounara/Gouvalara (C333) in Messenia (or at least I need one.)  See #Things_Mycenologists_Say, fn. 11.

Posted by Robert Consoli at 1:44 PM