The Geography of Partheni Bay on Leros

The island of Leros, in the Dodecanese, lies between Patmos and Kalymnos.

Simpson and Dickinson tell of an early Bronze Age site discovered on the edge of Partheni Bay which is in the north of Leros as shown on the next map.

"The easternmost of three promontories (collectively named "Ta Poundaria") on the S shore of Partheni Bay in the N of the island was an EB settlement.  The site is only 80 m. NNW-SSE by 40 m., but may have been partly eroded by the sea.  The  sherds found are from jars and pithoi of EB I type.  ... "[1]

Where exactly is this site?


On this map we see the three promontories called 'ta Poundaria'. They are the easternmost on the south coast of Partheni Bay. The one furthest E I have arbitrarily labelled "Poundaria 1". Its neighbors,Ta Poundaria 2 and 3, lie just to its W. 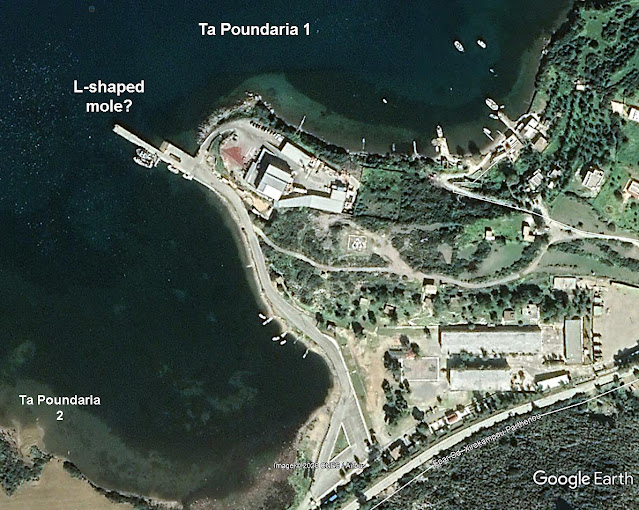 Does this satisfy the criteria set out by our authors? Here's what Simpson and Lazenby said about it earlier:

" ... a very low and very small promontory ... with the remains of an L-shaped mole at its north-west tip. The promontory, which is about 80 m. long by 40 m. wide, is the easternmost of the three (named collectively 'Ta Poundaria') in the middle of the south shore of Partheni Bay (the central promontory is even smaller, and the westernmost is the peninsula discussed by Benson where both Ross and Burchner reported tholaria)."(52)[2]

In order to give an idea of the size of the site relative to the peninsula I have drawn a circle with an area of 3200 m. (about 32 m. radius) against a photo of Ta Poundaria 1. I show this circle in the next photo:

I have identified this site in the Mycenaean Atlas Project as C7111 and I suppose that we're no more than twenty or so meters away from wherever it was that these Early Bronze sherds were discovered.

Simpson and Dickinson [1979] 367 suggest the presence of another site in this area:
"Similar fragments of pithoi found on a hillock c. 1 km. to SW may  represent  a cemetery area connected with the settlement.'"[4]
Where is this 'hillock'? 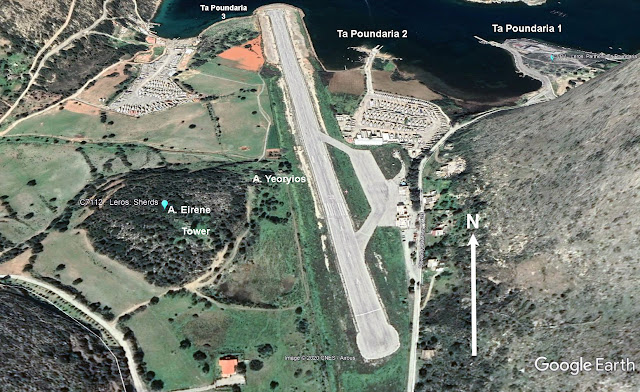 The hillock in question sits just to the SW of the Leros airport runway.  At its highest point it is 11 m. above the surrounding plain.  On its peak sit the ruins of a tower about 8m square, presumably Hellenistic, and about which there has been some debate.  Early investigators supposed it to be the site of the often-mentioned Temple to Artemis (Parthenos Iokallis).  The virgin Iokallis has been thought to be a local semi-deity whose cult was assimilated to that of Artemis.  In 1905 Dawkins and Wace established that this platform was really just a tower.[5]  Bean and Cook reaffirmed this in 1957.[6]  And even though no other location for the temple has been suggested, this remains the consensus of scholars today.  But the idea that Artemis' temple is located on this hill hasn't quite died.   (Including the Greek Ministry of Culture and Sports which still has this claim on their website here. )  In fact, Benson gives reasons why the tower base may have originally been the location of a small temple.
Here's a photo of the entire top of the hill with some superimposed drawings of what can be made of the structures currently remaining. 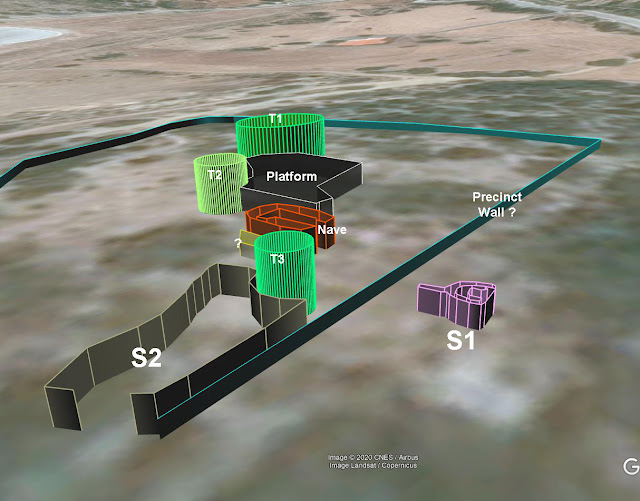 The green cylinders (T1, ... ) are trees: a crude if effective way of representing them.  S1 and S2 are structures whose purpose I cannot determine.  The structure labelled 'Platform' is the proposed tower base.  The orange structure labelled 'Nave' is the location of the church of H. Eirene. I marked one structure, in yellow, with a question mark.  It is not clear whether or not this is part of H. Eirene.
Following is a photograph of the same area from directly above: 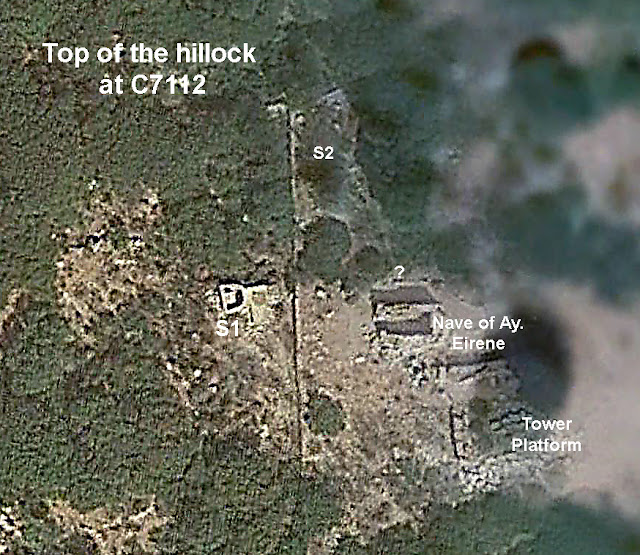 At some point in the Christian era the stones of the tower platform were re-used to build a small chapel to H. Eirene (F6216). [7]   Of H. Eirene Benson says this:
"Parallel and very near the tower on its north side is a small ruined chapel , known locally as Ayia Eirene, built largely with blocks taken from the tower. The small conch - like apse is constructed of brick and concrete , which was covered with plaster on which are traces of wall painting in red, yellow and dark greenish grey paint. The total height of the apse above the present surface is 2.45 m. A clandestine excavation which had taken place recently went down below the obvious level for a floor without revealing any traces of one."[8]
I found some pictures that show what remains of the nave of this chapel.  You should be able to link to them here:
https://www.lerosinfo.com/media/k2/items/cache/954fb0ebf1d84fb921bfb0b6e045d57f_XL.jpg 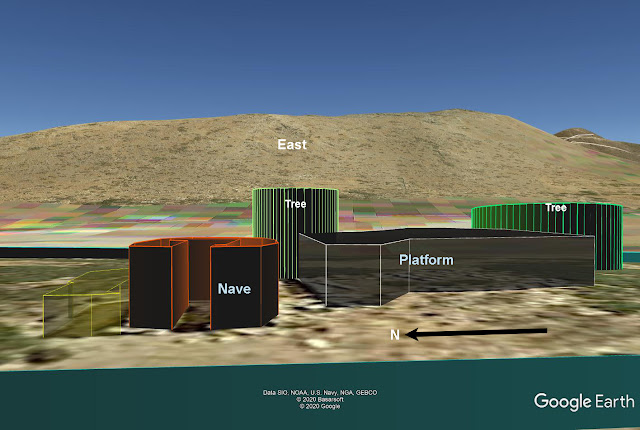 This is the same scene from the photograph looking down the 'nave' of H. Eirene facing east.   Next to it on the S (right) is what's left of the tower platform.    On the N (left) of the chapel is a low yellow structure.  Photographs indicate that the slope falls away towards the N and I could not interpret what this structure was.  Take it with a grain of salt.

As for the platform itself there is another user-contributed photo that shows it up close and looking W.  You can find that photo here: https://media-cdn.tripadvisor.com/media/photo-m/1280/18/7c/ac/ae/view-of-temple-of-artemis.jpg

Here is a reproduction of that photo.  Here the viewer is looking directly W along the apse end of the nave (center).  The platform is to the S (on the left) under the shade of a tree. 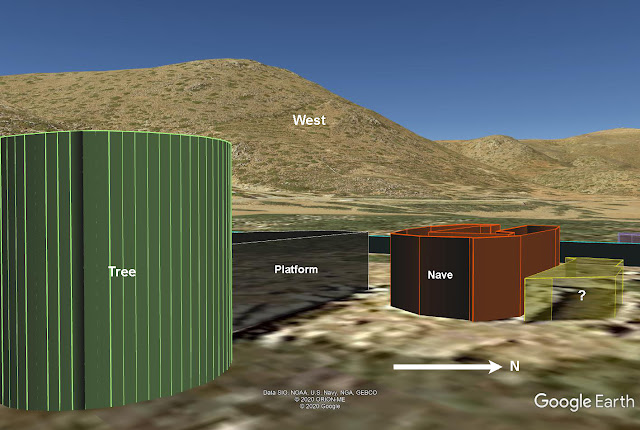 The temple that was thought to be here was famous in antiquity as sacred to Artemis.  The priests kept Guinea hens here which they advertised as Meleager's sisters, the Meleagrides.

In my next post I will devote more space to the myth of Meleager.