Announcing the Neighbor Analysis Page for the helladic.info website


The Mycenaean Atlas Project is happy to announce that the website helladic.info now supports nearest neighbor analysis for every site in the database.  This is the beginning of an effort to integrate all sites to their surrounding environments.

A dedicated neighbor page can be accessed from any Place Key Report page.  There is a new button, ‘Neighbor’, on the lower menu line of that page.  When that button is pressed a new neighbor page will appear based on your anchor site.  This page contains new graphs and a table based on analyzing the anchor site’s neighbors.

To perform this analysis the software searches the database for sites within 1500 m., in any direction, of the anchor site.  The area covered is 3 km. square or 9 square km.  These neighbors are then displayed in the form of a sortable table that lists the  place key, name, type, elevation, and distance of the neighbor from the anchor site.

The neighbors are also displayed on a new map at the upper right.  This map shows only the neighbors and does not display features.

The second chart is a vector graph that depicts each neighbor as a vector with distance and length proportional to its distance from the anchor site.  This chart is an abstract representation of the neighbor map on this page.  The vector chart, however, depicts distance and direction in a highly abstract way that can be taken in at a glance.  Each vector is labelled with the place key of the neighbor in question.  It will quickly show, for example, whether the anchor site is surrounded by neighbors or whether it is on one of the edges of a cluster of neighbors.

Scales have been drawn to make analysis easier.  These scales are useful in measuring distances from the anchor site to its neighbors.  The scales display tic marks at 100 m (1/10 km.) intervals.  The center value (aligned to the anchor site) is marked ‘0’.  Positive distances are marked at 1 km with the integer ‘1’ at ten tic marks to the left and also to the right.

For both of these charts and for the map north is to the top.

The user should bear some cautions in mind.  Neighbors are, of course, limited to whatever is in the database and this site cannot guarantee that the list of neighbors is exhaustive.

The user should also be aware that at present the neighbors shown on the map and the graphs are from all time periods and may not have existed at the same time as the anchor site.  I'm working on making this more sophisticated.

Also there are some areas for which this approach does not work very well.  Here is an example from the Athenian Agora (C1868) where there are so many sites that the graphs basically become unreadable:

Enlarging these charts would not help.  The whole thing is just a smear.  There are also sites which have no neighbors at all or, at least, none as defined here.  Here, for example, is the neighbor page for Larisa on the Hermos (Aeolis) C1473: 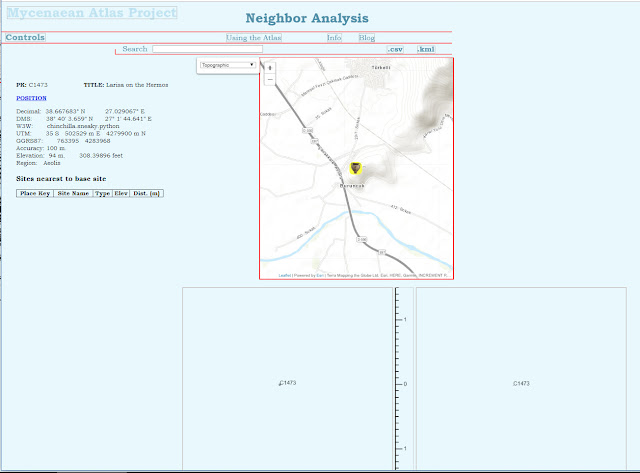 For many areas, however, this page should be a valuable aid for the analysis of Bronze Age sites.  Here's one more example, from one of the well known (and now disappearing) mounds (C319) at Lefki Kaldamou in Messenia: 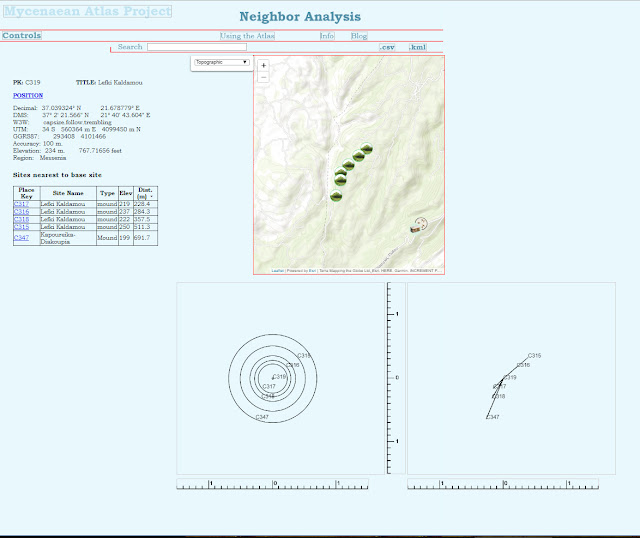 The graphs quickly and precisely show that these mounds are more or less evenly spaced and arranged in a nearly straight line.

These charts are implemented using the HTML 5.0 canvas.  The canvas construct does not support links.  You can, however, link directly to any of these neighbor sites from the table on this page.


The neighbor page is available to be used now.  That software was delivered yesterday.  A new data base which adds about 60 new sites, mainly in Crete, will be released either today or tomorrow.

Your feedback is very valuable to me.  My e-mail address is: bobconsoli 'at' gmail.com

I would ask you to follow me on Google Plus but c'est la guerre.

Friends don't let friends use Facebook and if you are using it please stop.


Most researchers in this field use some product like Microsoft's Excel to create a DB.  This is fine; it's what is generally referred to as a 'flat file' - a single table representation of your data of interest.

The Mycenaean Atlas database, on the other hand, is a relational database with several tables that was built using MySQL.  I will make dumps of this DB available but you need MySQL (or similar) and a knowledge of Structured Query Language (SQL) to run it.  (I'm pretty sure that you can interface to my database from ArcGIS or QGIS).

Otherwise it doesn't make much sense to ask for it.  But If you'd like to have a copy of the Mycenaean Atlas database anyway then e-mail me (bobconsoli 'at' gmail.com) and tell me about your project.

And remember that useful .kml and/or .csv files can be generated directly from all the windows (including the new reports pages) of the website helladic.info   Try it out!   I'm also willing to generate custom .csv or .kml files from the atlas if you need something specific.