Giorgos Vavouranakis, in his Funerary Landscapes East of Lasithi, describes the burial sites around Hagios Georgios in Crete.  Of the Volakas Hill site he says this:

"The second burial site is on the south slope of the Volakas hill, just outside the modern settlement (of Hagios Georgios), to the northwest off the main road ... Nine chamber tombs with a roughly circular chamber and a dromos were excavated  ..., but were found looted and, generally, disturbed.  According to the pottery, the place was used throughout the Postpalatial period (LM IIIA-C)."[1]

The Volakas site is the location of several chamber tombs and was used for a very long time: from the Early Minoan III to the Late Minoan IIIC.  The site mentioned, outside Hagios Georgios, is in Siteia, eastern Crete.  Hagios Georgios is indicated by the arrow on this first photo: 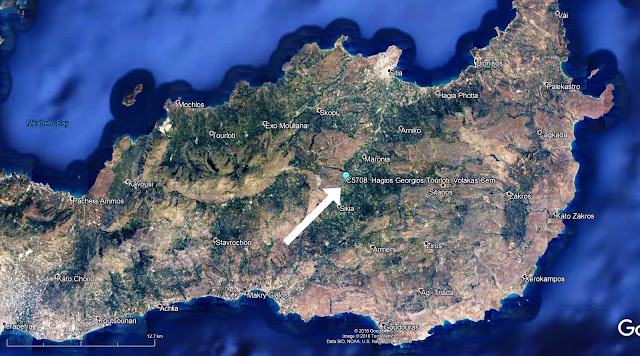 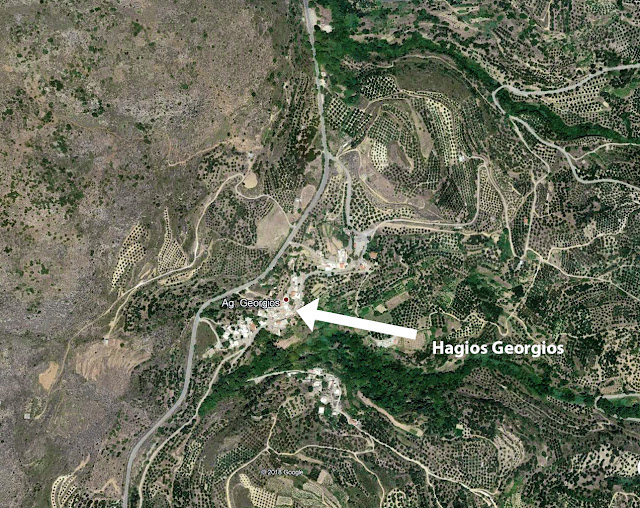 Here is a close-up of Hagios Georgios.  But where in all this wilderness of hills and field roads is the Volakas site?


Vavouranakis provides a photograph of the site which you see here: 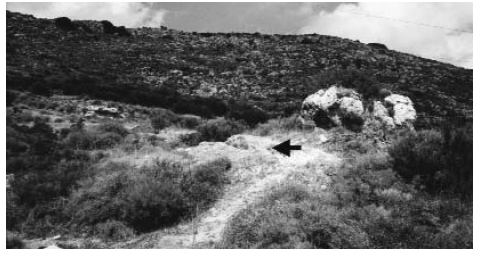 This picture leaves a lot to be desired.  By the time these photos appear in academic publications they've been stepped on so many times that there usually isn't much left.  In their published state these photos aren't nearly as helpful as their creators suppose.  And yet there's much that can be done to rescue these old pictures.  Applying judicious transformations in photoshop gives us this: 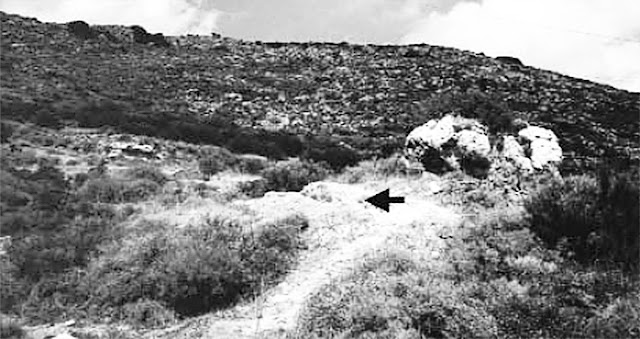 The real problem with the original is that the contrast is too low.  Major improvements were achieved by increasing the contrast and by sharpening (which is a kind of micro contrast increase).

We're looking at a footpath which leads up to a large rock with bush on top of it.  Behind the rock, and at no great distance, is a characteristic ridge covered with emergent rock and maquis.  Between the rock and the ridge is a dark mass that we must interpret as a grove of trees, probably olives.  Also, overhead, we can see at least two wires.  In this photo they've been aliased into a series of dashes but there's no mistaking what they are.  To the left (in this case SW) of the path is a complex of chamber tombs.  Vavouranakis' arrow points to them.

In the next picture I label all these features: 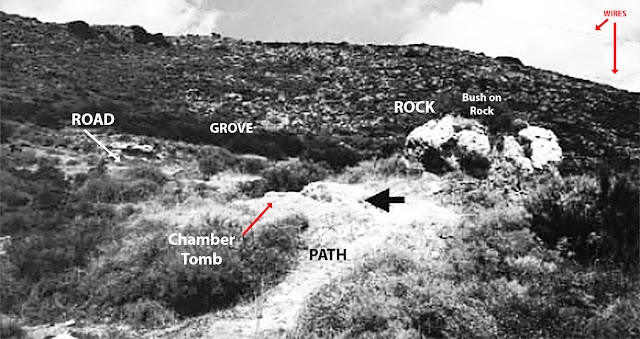 But where is this on the ground?   Well, it turns out that, because of the wires, there are only a couple of places where this could be.  Let's look:

In this photo I've drawn in the wires in blue.  These wires cross roads at only two places, here marked 'A' and 'B'.    In the next illustration I tried to recreate the view from point A in Google Earth:

If we compare this picture to the original photograph it's obvious that we're close.  The characteristic bumps on the ridge to the N match up well.  But we're really not close enough to that ridge.  Point A doesn't really match up to what we're expecting to see.  Let's try Point B.

This looks a lot better.  Not only is the characteristic ridge (with its bumps) visible but the wires match up better.  In this picture, though, there is a prominent tertiary road which is not visible in the original photograph.  Here's the view from above: 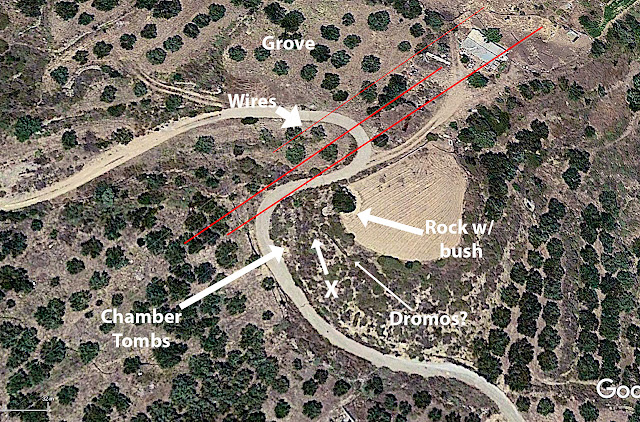 I'm convinced that this is the right place.  I've labelled all the features that I could.  The rock, the wires, the grove are all in their expected places and, if you click on this to enlarge it, you'll see what looks very much like Vavouranakis' chamber tomb dromos.  The only discrepancy is that the path in the original photograph has now disappeared.

Eaby [2007]: Eaby, Melissa Suzanne, Mortuary Variability in Early Iron Age Cretan Burials, Dissertation for Ph.D. submitted to the University of North Carolina at Chapel Hill, North Carolina. 2007.  Online here.  Eaby discusses the cemetery at Ammoudoplaka which is C5888 in the Atlas.  Ammoudoplaka is contiguous to the Volakas site discussed here.

With a correspondent I've been discussing the question of whether putting exact locational information online is a good thing or a bad thing.  I'd like to hear from my readers on this question - do you have qualms about putting this kind of information online?  You can respond to this post or use my e-mail which is bobconsoli at gmail dot com.


There have been recent database updates on helladic.info which show more sites on Crete (mostly).  Also the Elevation Report page and the Gazetteer report page have been updated with some extra features.  You might check this out.

You can e-mail me (and I hope you will) at  bobconsoli   at   gmail dot com
I'm also willing to generate custom .csv or .kml files from the atlas if you need something specific.