The Bronze Age in the Aigialeia

The major rail and roadway projects on the north coast of Achaea just a few years ago led to the discovery and emergency excavation of a number of new sites.

I'm writing this post in an attempt to clarify some of the locations in this area and their significance.

In the map above I show nearly the entire Gulf of Corinth.  Our interest is in the area around the classical city of Helike; the area in the red box.

Google has drawn in the major road and rail projects that I was talking about.

A closer picture of the area of interest.  Here we're looking south over part of the coast of northern Achaea.


The city of Aigion is just out of view to the right (west).  The rivers have been drawn in; from left to right (east to west) they are the Vouraikos, the Kerynites, and the Selinous.  The rivers have been one of the factors in creating the coastal plain which sits at the foot of the Arcadian massif.   But only one of the factors.  This is an active seismic zone and the coast has been subjected over millenia to both radical uplift and sinking movements of the earth's crust.

The most famous of these sinking movements occurred in 373 B.C. when the principal city of Aigialeia, Helike, was destroyed by a sudden sinking of the terrain.  A consequent tsumani flooded the city, killing everyone in it.  According to our sources the only things visible on the day after were the tops of the trees in the sanctuary of Poseidon.  The ruins beneath the waves were still visible in Pausanias' time.[1]  After that, though, the city was silted over, became invisible, and its location lost.


Over the years the city of Helike became a goal of many archaeologists who considered that it must be a kind of Greek Pompeii; a city preserved not by lava but by submersion.  Spiridon Marinatos regarded it as the great unsolved puzzle of Greek archaeology and made strenuous attempts to find it - to no avail.  In the late 1960s Peter Throckmorton worked with Harold Edgerton and Jacques Cousteau in attempts to locate Helike in the waters off the coast but their efforts, too, were not successful.

Dora Katsonopoulou (Cornell) and her team tried sonar investigation of the same waters but were also unsuccessful.  Recourse to the original texts that described Helike's destruction convinced Dr. Katsonopoulou and her partner, the physicist Steven Soter, that Helike had been situated not on the coast but inland on a lagoon and consequently the place to search for Helike would be inland on the alluvial plain.[2]  They turned to the land and proceeded to use bore-holes in a systematic attempt to find the city.  By the early 2000's they were turning up evidence that the plain had been densely occupied in every period including the Bronze Age.  The search for classical Helike led to a much better understanding of the Mycenaean period in this area.

The most striking finds, from my perspective, were towns and cemeteries from the Bronze Age.

I started by trying to find the position of the EH town.  There is a detailed map of the bore-hole exploration results and I copied and positioned that map in Google Earth as an overlay. 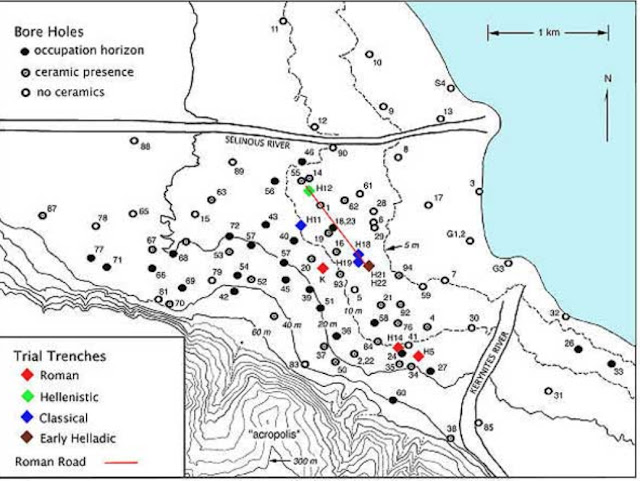 Here is the map as it appears on the www.helike.org website[3].  The EH occupation site is the brown diamond at the end of the Roman road (the red line).

I overlaid this sketch map in Google Earth to try to get the most accurate position possible.  I show this in the next image.

Marking the EH settlement and then removing the overlay leaves us this:

The proposed EH site is just a short distance from the modern town of Rizomylo.

The EH hab that I've been describing turns out not to be the primary focus of EH habitation in this area.  A short time after the discovery I've just been describing another EH discovery was made consequent to the building of the Corinth-Patras highway.  This was of a much larger habitation for which C5004 might have been the port.

That rescue operation uncovered a major EH habitation site at the southern end of Nea Keryneia which borders Rizomylos to the NW.[4]  The location of the site can be determined from the Google Earth October 25, 2013 image.  I reproduce it here:

The visible houses at the upper right are in Nea Keryneia.  The highway is the major new Corinth to Patras highway.  This excavation had to be ongoing during 2011 at least because there's a Google Street View of this area from November of that year. 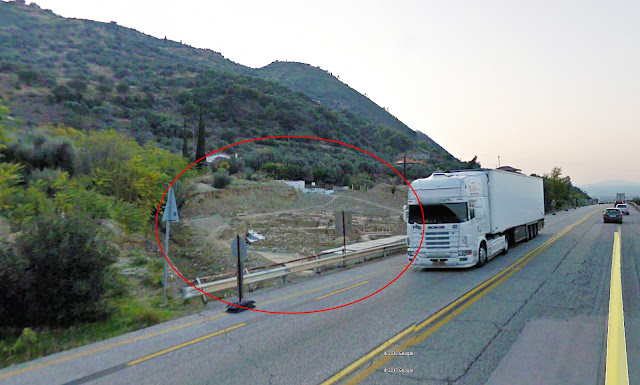 The excavated area shown in these pictures is about 2000 square meters but Dr. Kolias estimates its size at 50,000 square m. or about 5 hectares.  To give you an idea of how large this is I drew a circle of 126 m. radius (area of 50,000 sq. m.) over the site.  This does not give the configuration of the site; it merely suggests how large the site may have been compared to what's been excavated. 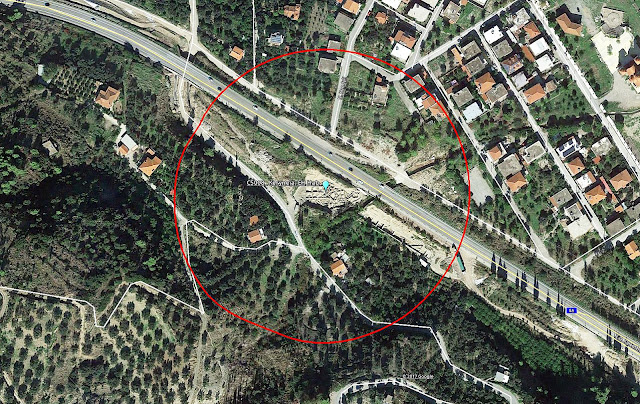 Dr. Kolia says: 'The long period of occupation and the large settlement area indicate its central (administrative) role in the area of Helike during the 3rd millennium. Moreover, it has been established that early proto-urban centers were being formed in the Peloponnese during this period and the extended Early Helladic settlement in Keryneia should be included in that group'.[5]

The LH cemetery and Habitation at Kallithea (C5005)


On the hills overlooking the northward bend of the Kerynites river and not far east of Rizomylo there are two named areas, Lagades and Kallithea.  I show them in the next illustration:

Here we're looking at a close-up of the transition from the inland hills to the coastal plain.  The Kerynites river is at the lower right.  This is where it makes its final bend to the north and the Gulf of Corinth.  Lagades is the area in the upper center.  Kallithea is the continuation of that ridge at the lower left.  Between the two is a major Mycenaean cemetery [6].

Giannopoulos says that the construction of a cistern in 1993 destroyed Grave no. 1 in that complex.[7]  The cistern is indicated by an arrow in the above illustration.

The LH Habitation at Kallithea (C5006)

The associated Mycenaean settlement was harder to find.  I found an online journal which described the site.[8]  The next illustration is their picture of it at the time when the excavation was still open. 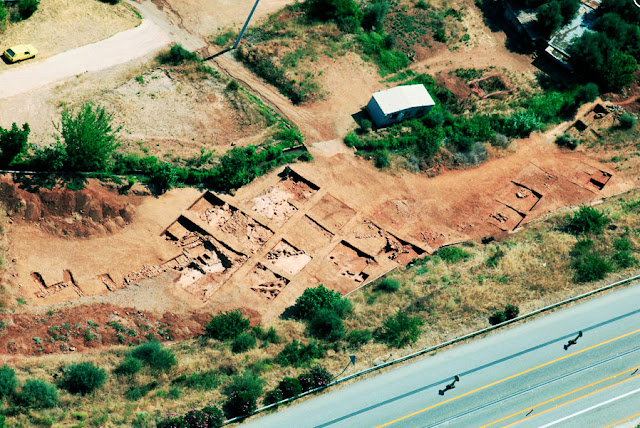 To find the site I traversed the main highway in Google Earth which stretches from Athens to Patras and just beneath the named area of Kallithea.  I finally found it here: 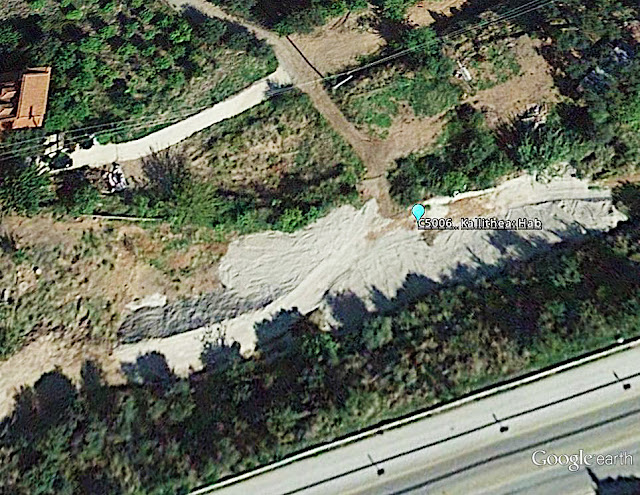 Let's put these Bronze Age sites all together:

In this illustration the four sites I described are labelled in white.  Modern towns are in red.


Please don't hesitate to write with reactions to this blog post.  I want to hear from you!