A Trove of Precise Locations in Bronze Age Cyprus


You are welcome, Sir, to Cyprus.  Goats and Monkeys!
Othello, iv, 1


Recently I’ve been adding locations in Cyprus to the Mycenaean Atlas Project.  From van Wijngaarden[1] I’ve derived a list of some 90 places where Mycenaean ceramics have been found.  I learn, somewhat to my surprise, that there is no definite evidence of Mycenaean settlement or colonization on Cyprus.  There is, of course, no shortage of papers that claim as much.[2]

The purpose of this post is to share with my readers a resource that turned up unexpectedly while reading about this island.  In Andreou’s study of Bronze Age Cyprus there is an appendix of more than 180 BA archaeological sites on Cyprus with their exact positions.[3]  This is a veritable treasure trove and although she presents her position data in a not-very-friendly form of UTM (Universal Transverse Mercator)[4]  in about twenty minutes I was able to take her entire list, establish a file, and convert it with a UTM to DMS converter.  I used this conversion site.

The result was a glorious .kml file, suitable for opening in Google Earth, that you can safely pick up from my Google Drive account here.

If you prefer this information in a comma separated file (.csv) you can download it from Google Drive here.


How good is her data?  Every measurement contains error.  So I did a bit of checking.  I do know where Kalavasos-Tenda is so I looked at her answer for that location:

Kalavasos-Tenda is a Neolithic site in the Kalavasos valley in southern Cyprus.  The orange dot in the above photo is from my Features table.  Its position is 34.752469° N, 33.303370° E.  Dr. Andreou's location is the purple push pin.  That pin is about 10 meters from the closest edge of the 'tent'.  That distance of 10 meters is, as far as I'm concerned, more than acceptable in work of this kind.

Dr. Andreou’s data was very helpful for confirming my location for Erimi-Kafkalla. 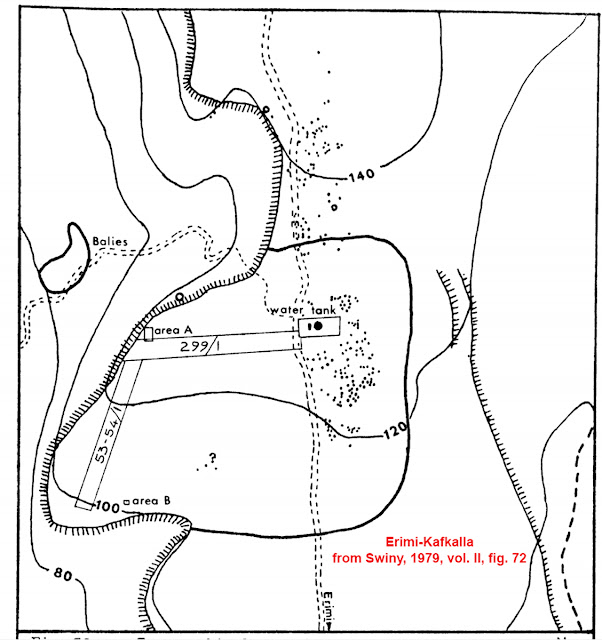 Now let’s look at it in Google Earth here. 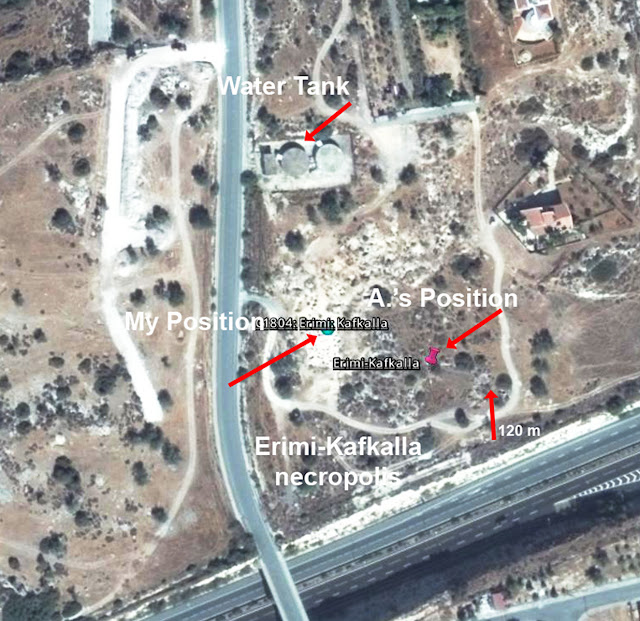 The water tank is in the right position although there are two rather than Swiny's one.  The altitudes match; I have marked one of the places where Google Earth makes it to be 120 m. altitude.  The informal road to the west of the tank is now paved and what appears to be a large freeway at the bottom is new.  You can even make out the scatter of tombs which is so visible in Swiny's sketch map.

In this picture taken from Google Earth the blue dot is my position and the purple push pin is Dr. Andreou’s position.  She has placed Erimi-Kafkalla at 34.688086° N, 32.916886° E which is spot on and confirms my initial placement. 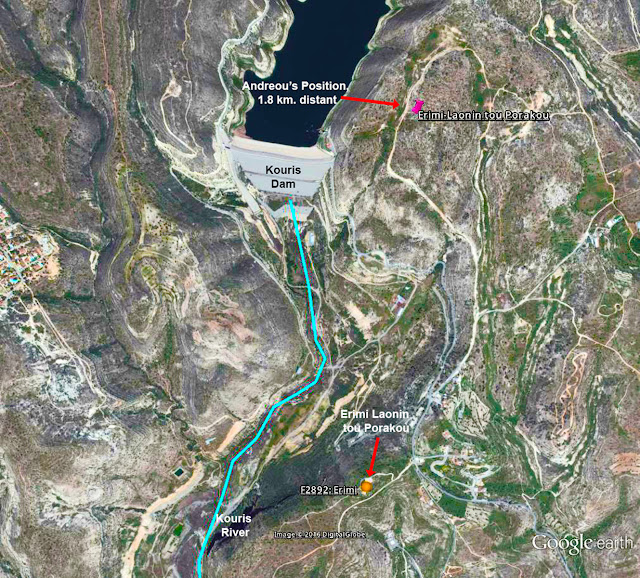 In the picture above we can see the situation.  Erimi-Laonin is positioned on a cliff to the left side (east) of the Kouris river.[7]  It is actually located on the same Kouris river and just to the north of Erimi-Kafkalla which was discussed above.  I have marked the position ( 34.711862° N, 32.923202° E) of Laonin as 'F2892'.  Her position would place it just to the east of the Kouris Dam which is not a helpful location for finding it.

Perhaps the biggest difference in Dr. Andreou's measurements is in respect to Maa Palaeokastro.  Let's look at the peninsula on which it sits. 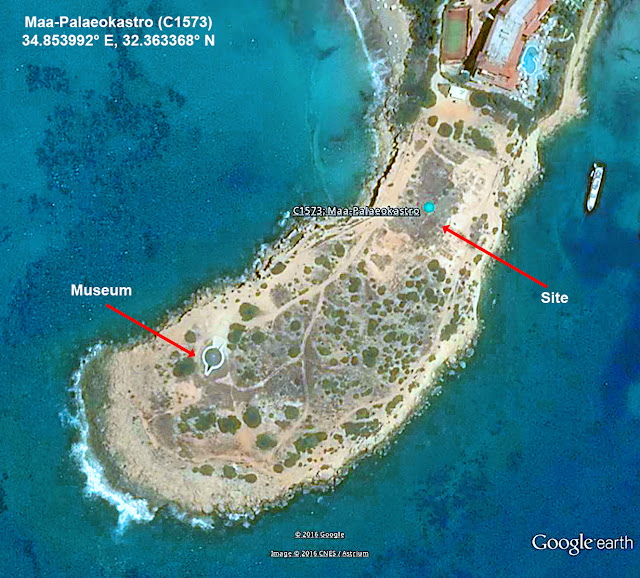 In the 12 C BC the whole peninsula is thought to have been the site of a settlement.  The digs that have taken place there are best seen in the site that I've marked.  In the picture above we also see the hilariously named 'Museum of the Mycenaean Colonisation of Cyprus' which is shaped like an arrow in order to indicate the direction from which the first (Mycenaean) colonizers came.(!)[8] 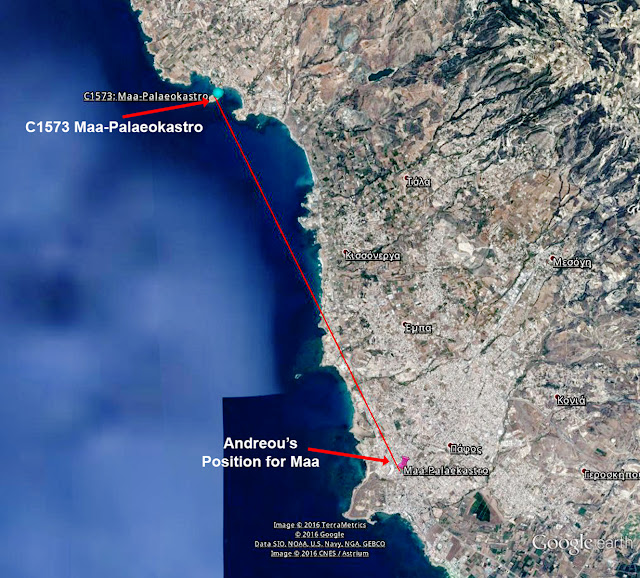 Nevertheless, Dr. Andreou's points are still very valuable, particularly for the Kalavasos Valley on southern Cyprus which is an area that she seems to know best.  She has performed a very great service for anyone interested in prehistoric Cyprus.

I'll be going on vacation to Hawaii until April 5, 2017.  I'll be silent until then.  Perhaps, for a change of pace, I'll put up some pictures of Hawaii.

Anyone who would like to have a copy of the MAP database can send an e-mail to bobconsoli 'at' gmail.com or leave a comment on any of my posts.  To run the MAP database requires a SQL server running on your desktop computer.   MySQL is such a server and it is powerful, industry-standard, and free.

[2] The authoritative discussion of this topic is in Knapp [2013], 451 ff.  For the role that Cyprus plays in the Greek historical imagination see Michael [2005] passim.  Specifically see her remarks on Maa Palaeokastro beginning on p. 127.

[4]  For once Wikipedia is good for something.  See their description of UTM here.

[7] For a useful discussion of the Italian effort there see this.

Michael [2005]: Michael, Angela Stella.  Making Histories: Nationalism, Colonialism and the Uses of the Past on Cyprus.  Thesis submitted for Ph.D., University of Glasgow.  June 2005.  Online here.

van Wijngaarden [2002]: van Wijngaarden, G.,  Use and Appreciation of Mycenaean Pottery in the Levant, Cyprus and Italy (ca. 1600 - 1200 BC).  Netherlands Organisation for Scientific Research and Amsterdam University Press. 2002.  Online (more or less) here.
Posted by Robert Consoli at 9:34 AM